So now we come to the mid-range of the mid-calibers – the thirty-fives.

It’s somewhat baffling that this perfect mid-range never really seemed to catch on with American shooters, beside a couple of noteworthy exceptions.  In the handgun world, the .357/9mm caliber range is very popular, but in rifles?  Not so much.

Those noteworthy exceptions are, however, extremely noteworthy.  So, without further ado, let’s examine the thirty-fives.

At the End of the Black-Powder Era… 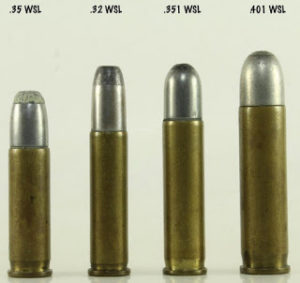 The story of the thirty-fives is largely Winchester’s story, but there is at least one case in which Remington put one right through the ten-ring.  Before we talk about that, we must go back to the year of 1903.  In that year, Winchester dominated the lever-gun market, and one of their better-selling pieces was the powerful, box-magazine-fed Model 1895.  1903 was the year when that company, in that rifle, brought forth a cartridge called the .35 Winchester.

The new .35 packed more punch than the .30WCF, but not as much as later rounds.  The factory load shot a 250-grain soft-point pill at about 2,200 fps, making it capable of handling elk and black bear with no trouble.  But like its parent, the .30-40 Krag, the .35 was limited by the rifles it was chambered in, not only the 95 Winchester but also the Remington-Lee and the Canadian Ross rifles.  Loads were restricted to about 45,000psi for the ’95, although the bolt guns would take a bit more.  Winchester never saw a great deal of demand for the round, and so it was officially discontinued with the end of the Model 95 in 1936, although factory ammo was available for some years after that.

With the advent of smokeless powder, Winchester also experimented with a couple of thirty-fives made expressly for a new semi-auto, detachable magazine rifles; these early “assault weapons” were the Winchester Model 1905 in .35 Winchester Self-Loading (WSL) and the Model 1907 in .351 WSL.

As mid-range centerfire rifle cartridges go, neither of these rounds are going to blow up very many skirts.  The .35 WSL was roughly in the range of a .357 Magnum revolver round fired from a carbine, punching out a 180-grain slug at about 1,400fps.  The .351WSL hit a bit harder, launching a 180-grain slug at a bit over 1,800fps.  The Model 1907 was popular among prison guards and police departments as well as the folks they pursued; Clyde Barrow, for instance, sometimes used a Model 1907 in his predations.  I’ve shot a 1907 a few times; our son-in-law’s father owns one and has a few hundred rounds of mixed-bag ammo he inherited with the rifle.  It’s an easy rifle to shoot; recoil is minimal and out to a hundred yards, even with factory iron sights it’s easy to put rounds on target.  I can see why it was a popular combination.

While Winchester was experimenting with their thirty-fives, Remington wasn’t sitting on their laurels; they already had their Model 8 semi-auto, and when that rifle was introduced one of the options was a cartridge that would long outlast the old piano leg:  The .35 Remington.  It’s an interesting note that, while the .35 Remington was introduced in a semi-auto, it’s best known today as a lever-gun round. 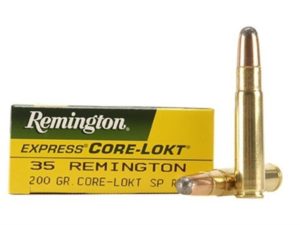 In addition to the Model 8, Remington also offered the .35 Remington in its successor, the Model 81, as well as the Models 14 and 141 pump-guns.  The Model 30 bolt gun was also offered in this round for a time, as was the Winchester Model 70; but the round found the most sales in the Mossberg 472 and Marlin 336 lever guns.  When I bought my own 336, way back in the distant past of 1981, I dithered between the .35 and the .30WCF for some time before deciding on the latter due to ammo availability, as I wasn’t handloading in those days; were I to make that decision today, the .35 may well have won that toss.

As the shooting community moved into mid-century, the thirty-fives were already well-established – and there, they would just kind of stay.

While Winchester’s WSL rounds didn’t last long, the .35 Remington maintained a dedicated following through most of the twentieth century, but in that time, it was joined by a few other remarkable thirty-fives.

The success (as such things go) of the wildcat .35 Whelen, which was just the .30-06 case necked up to take a .35 caliber slug, led indirectly to the 1955 introduction of one of the best American mid-caliber cartridges ever devised; the .358 Winchester.

As the name would imply, this is simply the .308 Winchester case necked up to .35 caliber, and its performance compared to the .35 Whelen is similar to the comparison between the two rounds’ parent cases, the .308 and .30-06.  Factory loads for the .358 put out a 200-grain slug at 2,200 fps, making it capable of handling any North American big game at short to intermediate ranges.

A big portion of the .358’s success lay in the rifles that handled it.  While the round was brought out in the Model 70, Winchester also chambered their Model 88 lever gun in the .358; Savage and Browning made it available in the Model 99 and the BLR, respectively.  For some time now I’ve been keeping an eye out for a Savage 99 in this caliber, but the right combination of rifle and available cash hasn’t yet materialized.

I’ve long believed Winchester missed a major opportunity in not adapting the semi-auto Model 100 for the .358.  That fine, modern semi-auto was sold in .243, .284 and .308 Winchester calibers, but for some reason the New Haven gunmakers never adapted it for the .358; the combination of the short, handy five-round autoloader and the hard-hitting .358 would have made an admirable rifle for such work as dark-timber elk or moose in heavy cover.

Speaking of the .35 Whelen; this wildcat round was developed around 1922 by James Howe of Griffin & Howe fame, and named for the famous Colonel Townsend Whelen.  After decades of increasing use in the game fields, Remington legitimized the round in 1988, offering (at last) factory ammo and chambering the Model 700 Classic for the .35 caliber round. 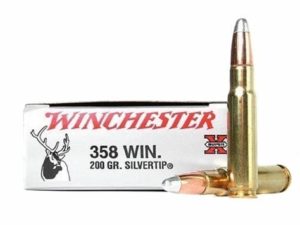 Like its smaller cousin the .358, this is a good round for any North American big game.  It’s a tad higher on the power scale than the .358, propelling a 200-grain bullet at 2,800 fps, compared to the .358’s 2,200; not an insignificant difference.  The Whelen round does, however, require a full-length action, whereas the .358 can be chambered in a short-action bolt gun or a lever gun, resulting in a shorter-lighter gun for close work.

As Remington learned, though, a great mid-caliber round in the wrong rifle can be a bad idea.

In 1965, Remington brought out what was at first glance an admirable combination of rifle and cartridge.  The .350 Remington Magnum anticipated the “short-fat magnum” trend by a couple of decades, and the Model 600 rifle that was first chambered for the new round was a slick little shot-action bolt gun.

However:  The .350 Remington Magnum was a considerable thumper, easily breaking the 3,000 fps barrier with the 200-grain bullet, and the 5 ½ pound Model 600 wasn’t a lot of gun for the new belted magnum.  Shooters charitably described recoil as “brutal.”  Model 600s and the succeeding Model 660, with its more traditional looks and a pound extra weight, often sported Mag-Na-Porting or other types of muzzle brakes along with mercury stock inserts and aftermarket pads to attenuate the kick. 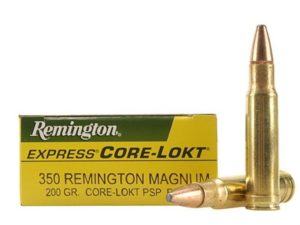 I have only once handled one of these rifles, a Model 660 in the .350 Remington Magnum.  And, yes, recoil was considerable.  This was a factory-stock job with no porting or any other modification, and with factory ammo, recoil was stout – and I’m large-framed and not very recoil-sensitive.  My .338 is considerably easier to handle.

This and the Model 600’s unconventional looks doomed Remington’s .350 Magnum round, although it was recently been reintroduced in that company’s 673 and Model 7 rifles, both of which weigh in at over 7 ½ pounds.  Maybe the short-action thumper magnum will see a renaissance; I wouldn’t bet any money on it either way.

So, as we’ve seen, the recent history of the thirty-fives is somewhat mixed.  The situation today is much the same.

The story of the thirty-five today is not much different than it was in 1960.  The .35 Whelen has been legitimized, and in 1982 Winchester brought out the .356 Winchester, a sort of rimmed .358 Winchester intended for the new Model 94 XT lever gun and later chambered in the Marlin lever guns as well.

The .35 Remington is still available in the Marlin/Remington 336.  Remington has let the .350 Remington Magnum again slip into obscurity.

The .358 Winchester has seen something of a comeback in, of all things, the AR-10 platform.  Wilson Combat has several versions of their AR-10 pattern rifles with upper receivers for the .358 Winchester, making for a very interesting rifle/cartridge combo; if you’re in the market for a big-game rifle and are into the whole Tacticool look, this may be worth a look.  Personally, I’ll hold out for a Savage 99 in this round – or maybe I’ll talk to my local gunsmith about the possibility of converting a Winchester 100.

Meanwhile:  There is another big block of thirty-somethings left to look at, those being the real major-leaguers – the .375s.  More on that in Part IV.  And finally, in Part V, we’ll look at all the various sports and oddballs we’ve overlooked so far.  Stay tuned.