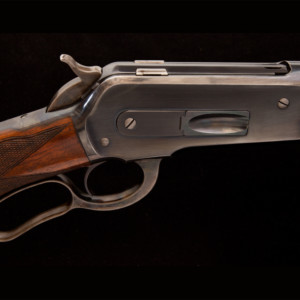 Resolved: The Winchester Model 1894, being a near-perfect combination of rifle and cartridge, is the gold standard by which all succeeding lever-action rifles must be judged.  Now that that’s established, let’s take a close look at this most popular of lever guns, the gun known for decades as “America’s Rifle.”

In 1886, John Browning gave Winchester the first in what would prove a near-immortal line of lever guns in the Model 1886 Winchester.  This was the first of Browning’s locking-block lever guns, and was a powerhouse, shooting mostly proprietary rounds up to and including the bison-stopping .50-110 Winchester.  This was a big, heavy gun, weighing in at nine pounds empty.  The 1886 was a great gun, powerful, but not handy. 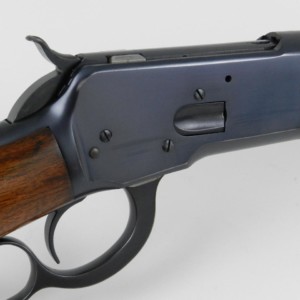 In 1892, the combination of Browning and Winchester did it again, this time with the light, handy, pistol-caliber Model 1892 carbine.  The ’92 was much smaller than the 1886, weighing in at just over six pounds; it was everything the 1886 was not, light, fast and handy; it was not one thing the 1886 was, that being powerful.  Intended as a companion piece to a revolver, it was like the earlier 1866 and 1873 Winchesters, chambered for the popular revolver cartridges of the day, including the .38WCF and .44WCF.

Having bracketed the market, Winchester finally hit the hot spot by splitting the difference; that difference was the Model 1894.

One of the criteria for a gold standard firearm is, as we’ve discussed in earlier installments, that perfect mating of gun and cartridge.  Smith & Wesson achieved this with the .44 Special and the Triple Lock; Colt and John Browning did so with the 1911 pistol and the .45ACP.  Winchester hit the ten-ring in the second year of the 1894’s production, when improved metallurgy enabled them to bring the rifle out in the new smokeless-powder .30 Winchester Centerfire (WCF), better known today as the .30-30. 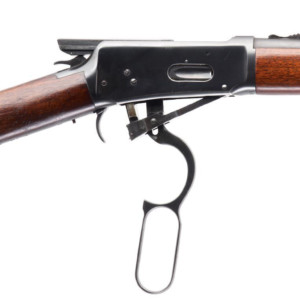 The trienta-trienta was an immediate hit.  The round is still popular today, from the Canal Zone to the Yukon.  It regularly punches out of its weight class; many a Yukon moose has fallen to the round.  It’s said that more whitetail deer have fallen to this cartridge than to all others combined, and while I have yet to see hard evidence of this claim, I don’t find it at all unlikely.

But a big reason that the .30WCF was a hit was because of the first rifle it was chambered in.  The Model 94 combined the light weight of the 92 at a bit under seven pounds, with a more powerful, smokeless-powder cartridge.  Sales immediately took off.  In 1927, the one-millionth Model 94 was presented to President Calvin Coolidge (his verbal response is unknown), the one-and-a-half millionth to President Truman in 1948 and, in 1953, the two-millionth example was presented to President Eisenhower.  Over seven million rifles have been built in all, making it the most successful centerfire sporting rifle ever made.  Nowadays one might argue that the Tacticool craze has resulted in more AR-pattern rifles than this being made, but I would maintain that this is a family of rifles rather than a single model; the Winchester 94 still, therefore, holds that top spot as far as I’m aware.

Over the years the 94 was offered in a variety of conformations – and a variety of cartridges besides the .30-30.  Rounds chambered in the great old rifle included:

The .30WCF, of course, outsold the others; it may well have outsold all the others combined.

A variety of barrel lengths were offered, in both round and octagon contours, from 16” to 26”.  Pistol-grip stocks and premium woods were available, as were half-magazine and take-down versions.  If Winchester could physically make it, it was available for special order, and you can still find one-of-a-kind variants for sale on the various online auction sites.

Besides the variations of the Model 94 itself, Winchester also produced two other models on the Model 94 action:

In 1964, the same year that saw a reorganization of Winchester’s manufacturing practices, also saw Winchester making a deal with Sears-Roebuck to produce the new, somewhat cheapened Model 94 as the Ted Williams Model 100, which deal continued until 1980; I can remember examining Model 100s in Sears stores as a youth, and even in my teens I remember not being impressed with the fit and finish of this store-brand gun.

The Model 1894 Winchester and the .30WCF cartridge have gone beyond the standard of the perfect mating of gun and cartridge.  This rifle and its most popular chambering have made such a perfect combination, with such lasting impact on the shooting world, that “Model 94 Winchester” and “.30-30” have damned near become synonyms.  I can only think of one other combination that has achieved this status, that being “.45ACP” and “Colt/Browning 1911.”

Success, of course, attracts competition; let’s look at some of that next. 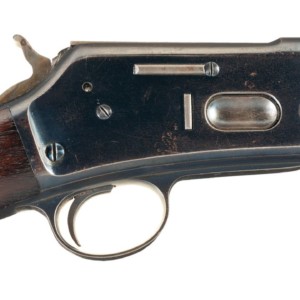 It’s important to note that the measure of a rifle is in the quality of its competition.  The Winchester lever guns inspired quite a bit of competition, some of it excellent, some… not.

In 1885, Colt, best known then for the legendary Colt Single Action Army, quietly dropped production of the 1883 Colt-Burgess lever gun, which was only chambered for the .44WCF (.44-40) cartridge.  When they dropped their only lever gun, Colt supposedly entered into a gentleman’s agreement with Winchester, stating that in return for their dropping the Burgess rifle, Winchester would forgo their plans for producing revolvers.  While the folks at Colt were true to their apocryphal word where lever guns were concerned, that didn’t preclude them from introducing the slide-action Colt Lightning in 1884, again in the .44WCF cartridge.  The Lightning was later also offered in the .38WCF (.38-40) and .32-20 Winchester; a small frame, “gallery” version was made in .22 Short and .22 Long Rifle, while 1887 saw the introduction of a large-frame Lightning chambered for the .38-56-255, .40-60-260, .45-60-300, .45-85-285, and .50-95-300 Express rounds.  The large frame guns were dropped from production in 1894, and the rimfire and pistol-caliber versions in 1904, never having achieved much popularity despite being well-made, reliable guns; in all versions, only a few more than 100,000 guns were made.

I had a 1901 standard-frame Lightning for a while, chambered for the .38WCF.  I picked it up in an Iowa hardware store for $300 in the days before online auctions, when one could still find great prices in odd locations.  The gun was not in good shape; the magazine tube was hopelessly bent and rusted, and the barrel was pitted, although the action was tight and functioned well.  I cleaned up the barrel as best I could and had a gunsmith friend find and install a replacement magazine.  The gun functioned fine, but the shot-out barrel was hopeless; the gun would put most of its rounds into a paper plate at 25 yards, but no more than that.  About then, the Cowboy Action craze was hitting the Mountain West in a big way, and I ended up selling that old Lightning to a shooter for a cool $1,100; he proposed to reline the barrel to .45 Colt, thus making himself an unusual carbine to go with his first-generation Colt Model P.  I dumped that money into the purchase of my Model 25-5 Smith & Wesson sixgun, and never looked back.

While there were many others, the prime competitor for the Winchester 94 has its origins in the year before the 94 was introduced.  In 1893, Marlin Firearms brought out the Model 1893 lever gun, which later was revised into the Model 36 and later still, the great Model 336. 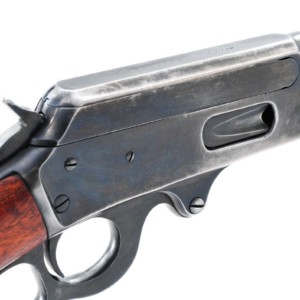 The 336 rises very near to gold standard territory itself.  The design philosophy is clearly different; the Marlin uses a heavier receiver with a solid top and a side-eject port, although it loads through a gate in the receiver into a tubular magazine like the Model 94.  The Marlin is a tad heavier, but the solid-top receiver made the gun slowly grow in popularity over the decades as optical sights became more ubiquitous.

Full disclosure:  My own .30-30 is one of these, a Marlin 336 I bought around 1980.  While I don’t hunt with it much anymore in the Mountain West (although it’s awfully handy to carry around in the cab of the pickup) I’ve had the thing for so long, and it shoots so quickly and well, that I haven’t been able to bring myself to part with it.

By the early Eighties, Marlin’s 336 ranked second to the Model 94 as the best-selling American centerfire sporting rifle ever made, with over 3.5 million guns sold.

By the time 1964 rolled around, Winchester was facing some financial crunches.  The manufacturing costs required to produce guns of the quality desired were rising, to the point that the company was actually losing money on some flagship pieces like the Model 70 bolt gun.  So, some economizing was carried out.

The Model 94, like other Winchester greats like the Model 70 and the Model 12 pump shotgun, suffered from these changes.  The receivers were machined rather than forged and milled; the shell lifter went from a forged part to a stamped one.  Solid pins were replaced with rolled pins, walnut stocks on some guns were replaced with hardwood, and fir and finish overall suffered.

This damaged Winchester’s reputation.  Even today, pre-64 Winchesters command a premium price.  By the end of the 20th century, as we have seen in previous installments, Marlin surpassed Winchester as the #1 seller of lever guns, in no small part because of the changes made in post-1964 production.

In 1982, Winchester sought to revive the Model 94’s flagging fortunes by adopting to one of the strengths of the primary competition.  One of the Marlin 336’s strengths was its solid-top receiver, which made scope mounting fast and easy.  Winchester responded with the Model 94 “Angle Eject” models, which used a cutout on the right side of the receiver to lower the angle of ejected cartridges, making it possible to mount a scope low and centered over the bore, but still requiring the use of an awkward side mount.

Because of these things, and also because of several corporate restructurings, Winchester’s great Model 94 languished.  The acquisition by FN Herstal resulted in some return to the old way of manufacturing, which also turned the new versions of the Model 94 from America’s Rifle to more of a carriage trade piece.  But the new Model 94s retained the Angle Eject and added a tang-mounted safety; for good and ever, it seemed, the rugged, simple, original Model 94 was gone.

Today, Winchester again offers the Model 94 in its later Angle Eject configuration, in a variety of calibers (including the great old .30WCF and the .32 WS) at a substantial price.  The new guns continued the tang-mounted safety, an annoying piece of pettifoggery that is utterly unnecessary on a gun with an external hammer; but such is the price of doing business in the firearms world today.

Fortunately, the well over seven million 1894s produced means that there are plenty of pre-64 originals out there.  If a shooter is what you’re after, you can probably find a refinished gun or one with some wear for around $500.  If you’re looking for an in-box original collectible from before that landmark year, be prepared to put some zeroes on the check.

But if you’re after whitetails in the woods, you could hardly find a finer rifle for the purpose; light, handy, fast into action, fast on follow-up shots, with plenty of accuracy and power for deer-sized game in the normal ranges one finds in woods and farm fields in the eastern United States.  This world-beating combination of rifle and cartridge – the Model 1894 Winchester and the .30WCF cartridge – changed the world of lever guns forever, and that heavy influence still holds today, easily qualifying the (pre-64) Model 94 as the gold standard of lever-action rifles. 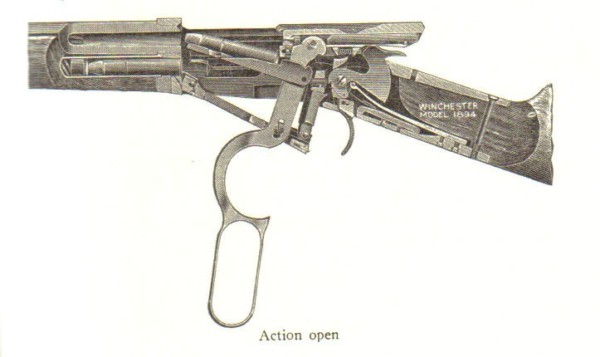