I wouldn’t have thought that such a salient example of the hubris inherent in the modern technocratic managerial state would come courtesy of an apparatchik within the Trump administration, but it seems, in 2020, we will continue to “see the world turn’d upside down”. Enter Peter Navarro, Director of the Office of Trade and Manufacturing Policy; an office created by President Trump in 2017 as part of his never-ending mission to reduce the size of the federal government and slash the economic regulatory state. In an interview today, Navarro stated that:

he was qualified to engage and disagree with Dr. Anthony Fauci on the use of an anti-malarial drug as a coronavirus treatment — which is not yet proven as effective — saying, “I’m a social scientist.”

“Doctors disagree about things all the time. My qualifications in terms of looking at the science is that I’m a social scientist, … I have a Ph.D. And I understand how to read statistical studies, whether it’s in medicine, the law, economics or whatever.”

I’ll pause for a moment to let you finish laughing.

While understanding the basics of formal statistical inference, as well as informal inferential reasoning, are valuable skills for anyone to have, it is absolute arrogance to claim that such knowledge alone is sufficient to make sound, valid, and informed decisions independent of subject matter expertise. Take the example of someone who, over the course of a few years, only succeeds in completing a task 34 to 36 percent of the time. At first glance, one might determine that this individual is of limited ability, perhaps a novice. Now, if I tell you that this percentage is someone’s MLB batting average, it is now obvious that this individual is now operating at Hall of Fame standards. For anyone who is not a crank, it is clear that the ability to understand statistical inference is impotent without the experience and intuition afforded by familiarity in the discipline of human knowledge in which the subject studied is situated.

Does this mean that Navarro cannot formulate an opinion on the efficacy of hydroxychloroquine based on his understanding of the data we have? Of course not. In our everyday lives, we are forced to make decisions on matters in which we are not experts all the time. However, on the level of what the classical Greeks termed ethos, we should give more credence to an immunologist over an economist in interpreting of what level of statistical significance signals the efficacy of an intervention (without even getting into the difference between pharmaceutical efficacy and effectiveness). It is statistics’ dirty secret that effect size interpretation is arbitrary.

Likewise, when considering the economic impact of a public health intervention like a quarantine, we should give more credence to the economist over the immunologist. Yet, while medical education inculcates its students with an ethic of avoiding doing harm to one’s patients, such ethical training is often devoid in the curricula of economists, sociologists, political scientists and other Navarro-esque members of the American nomenklatura, who believe that Pearson’s r is the only necessary calculation for the navigators on the ship of state.

Now, I must admit to fibbing a bit in my first sentence – I wasn’t surprised at the source at all. Navarro’s pomposity lays bear the bankruptcy behind the paleoconservative Buchananite criticisms of the managerial state. For the past four years, the various mountebanks that have darted in and out of Trump’s inner circle, like flies flittering around a freshly defecated pile of dung (e.g., Kushner, Gorka, Bannon, Miller, Navarro, Scaramucci, Cuccinelli, Giuliani, Lewandowski, etc. ad nauseam), have made it clear that they never had any intention of reducing autocratic rule by executive power, of eliminating work-arounds of legislation through administrative rulings and executive orders, of ending the redistribution of wealth through taxation to politically favored identity blocs, and no longer justifying these overbearing actions through an appeal to moral superiority. In the end, after all the Sturm und Drang delivered through memes of cartoon frogs, the only thing that has changed is the ideological dress code for managers – from Brooks Brothers and Glen check to Carhartt and Realtree. The Technocracy still rules, formulating massive intervention and regulation of every aspect of our public and private lives through naive statistical models, blissfully unaware of their inherent ignorance.

But what do I know? I’m a social scientist. 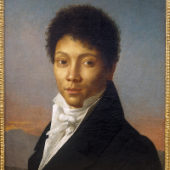 The following biography was crowdsourced from the members of the Glibertarian editorial staff: Legend has it that a double rainbow and a glowing new star appeared in the heavens to herald the birth of Heroic Mulatto, who grew up to be a highly educated asshole who likes twerking and is one surgical procedure away from being the ultimate diversity hire. Banned from entering Scotland.