It’s no news to anyone that has been reading my articles that there are a few now-obsolete guns and cartridges I’d like to see make a comeback.  One of those is the now-defunct .25 rimfires, which I would favor as a small-game round.  Here’s why. 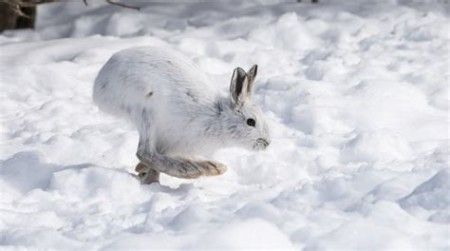 Snowshoe Hare, the makings for a good stew.

Small game hunting for the pot is something of a specialty unto itself.  While most mentions of small game bring about a vision of fine shotguns, pointing dogs and fine-feathered birds flushing, there are also the furred critters:  Rabbits, hares, squirrels, marmots, and so on.  The currently accepted rifle/handgun round for such game is the .22 long rifle, but there are issues with that fine old round; most of the current standard velocity offerings are target/plinking loads, and the dedicated small-game loadings tend towards high velocities and soft, quick-expanding bullets that can destroy a lot of edible meat.  The .22LR is also a bit on the anemic side for bigger critters like snowshoe hares, jackrabbits, marmots, raccoons and so on.

There is also the .22 Winchester Magnum Rimfire (WMR) but while that round delivers decisive kills on those bigger animals, it has the same issue as the .22LR with velocity and bullet expansion, only rather more so, making it problematic as an all-round small game cartridge for everything from gray squirrels to raccoons.

I’ve rifles in both rounds, and have used handguns for both, although these days I do not own a sidearm in .22WMR.  Both are good rounds, of course.  Both have their limits in small-game hunting. 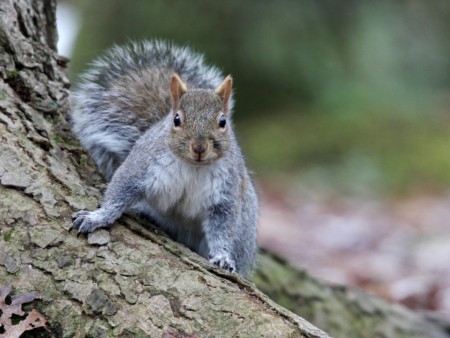 In my youth in Allamakee County, I spent an inordinate amount of time in the fall hunting squirrels, both the gray squirrels that lived in the tall timber on the hilltops and the bigger fox squirrels that tended to stay down in the creek-side bottomlands.  Squirrels are tough little critters but not particularly sizable, although corn-fed Midwestern fox squirrels can grow surprisingly large.  I hunted them with a .22LR rifle, usually using CCI high-velocity hollow-points.  Headshots are preferred for this kind of hunting, but a squirrel’s head is a tough target; the lethal area is about the size of a big acorn, and it’s constantly moving.  Unless shooting at a stationary animal at short range, body shots are frequently necessary.  And the .22LR high-velocity hollow points can mess up a lot of a squirrel’s edible meat if you clip a limb, where most of the meat is.

At about age 14 I picked up a Marlin bolt gun in .22WMR, which delivered more authoritative kills on the big woodchucks that frequented our hills, did even more damage to smaller squirrels and cottontails.

I didn’t really realize it at that time, but what I needed was a good all-around rimfire cartridge that could fulfill all my small-game needs.  In the past, there was such an all-around rimfire round; it fired a slightly larger-caliber bullet than the .22 rimfires at a moderate velocity, delivering quick, clean kills on larger game while not destroying a lot of edible meat.  That round was the .25 Stevens rimfire.

A Bit of History

In 1900, the J. Stevens Arms and Tool Company in partnership with Peters Cartridge Company brought out the Stevens Crack Shot #15 single shot rifle in a new round, the .25 Stevens rimfire. 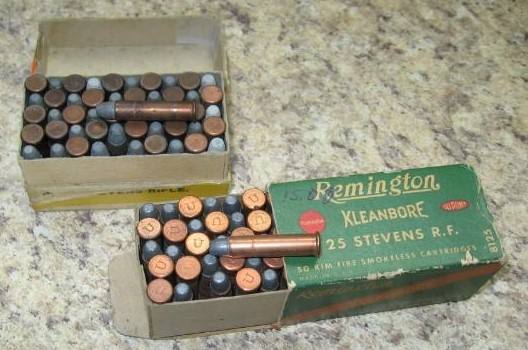 The new round was an effective one for its time, with the smokeless-powder loadings firing a 65-grain bullet at about 1,200 fps, packing considerably more punch than the .22LR.  The line of Stevens single-shots, including the well-known Favorite, were neat little rifles, light, handy and accurate.  They were favored by small game hunters, farmers, homesteaders, and trappers across North America.  Shortly after the introduction of the .25, the Stevens Buckhorn bolt-action repeater and the Stevens-Lord single-shot pistol was also offered in .25 Stevens, although few other arms were chambered for the round.

The .25 wasn’t perfect.  It had a somewhat lower velocity than the .22 LR and therefore a higher trajectory, but that was of little import to most of its users, as most shots on small game were at short ranges.  Inside of fifty yards the trajectory issue mattered little, while the quick kills afforded by the flat-nosed or hollow-point versions of the .25 were favored.

In 1902.  Stevens and Peters doubled down by bringing out the .25 Stevens Short, which could be safely fired in the regular .25 Stevens rifle, much as the .22 Short can be fired in a suitable .22 LR piece.  It’s a bit hard to see the reason for the shortened round, other than if offered the same quiet short-range advantage of the .22 Short but with a heavier bullet.

The .25 Stevens didn’t last long.  It never achieved a great sales record, being rapidly eclipsed by the .22LR and later, the more powerful .22 Winchester Rimfire (WRF) (Note – not the same thing as the .22 Winchester Magnum Rimfire, introduced in 1960.)  Sales of the .25 languished, and by 1942, Stevens and Peters quietly dropped both of the .25-caliber rounds, over the vocal protests of an Idaho gunslinger and writer named Elmer Keith, who had been advocating the rimfire .25 as a revolver round.

But the story of the .25 as a small-game round wasn’t over.

There is a centerfire cartridge, historically chambered in both rifles and handguns, that shares many of the attributes of the .25 rimfires:  The same .25-caliber diameter but firing a slightly heavier bullet at slightly higher velocities, capable of quick, clean kills on bigger animals while not being overly destructive on smaller critters like cottontails or mountain grouse.  That round would be the .25 Winchester Centerfire (WCF) better known as the .25-20 Winchester.

The popular small-game loading of the .25-20 launches a 60-grain bullet at a brisk 2,100 fps, and even the heavier 86-grain factory loads leave the muzzle at over 1,800 fps.  This is a tough little round for critters up to coyote-size.

The .25WCF pre-dates the .25 rimfire, having been introduced by Winchester in the famous Browning-designed Model 92 rifle in 1895. 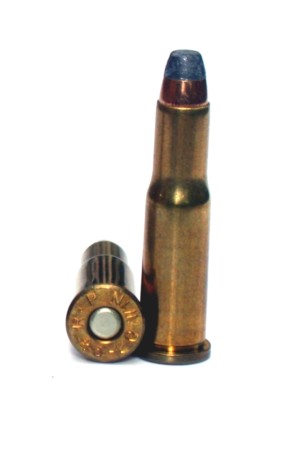 There are some advantages in a centerfire round like the .25-20.

First, the .25WCF was only offered in manually operated pieces:  Single-shots and lever guns, for the most part, as well as revolvers.  This is an advantage for the sportsman because it allows for the use of a wide range of loads.  While semi-autos can frequently be fussy about the bullet weights and range of velocities in their loadings, lever or bolt guns and revolvers are much less so, allowing the sportsman to “load down” something like a .25-20 to duplicate the .25 Stevens ballistics for use on small animals and birds while retaining the use of more powerful loads in the event you need to take down a fox, raccoon, jackrabbit or coyote.

Second, the .25WCF is still commercially loaded today, although loads are limited to one, a Remington load firing an 86-grain Core-Lokt soft-point bullet.  But dies are available, as are cases and primers, and a variety of bullets, making the .25-20 possibly more versatile than it was in those long-ago days of its introduction.

But the age and near-obsolescence of the .25-20 makes it problematic for shooters on a budget.  Realizing the full versatility of a .25-caliber small-game round requires handloading, which in turn requires a significant investment in press, dies, and so forth; also, the older guns available for the .25-20, like the aforementioned (and excellent) 1892 Winchester may not be up to the pressures that one could obtain with modern powders even in the diminutive .25-20 case.

There is another alternative:  The .22 Hornet, which is derived from the older .22WCF case.  Developed and introduced to the commercial market in 1930, the old Hornet has plenty of history and remains a fine cartridge for varmints out to about the hundred and fifty-yard mark.  .22 Hornet rifles are still available today, as is a somewhat more diverse variety of factory loads.  But the Hornet factory loads tend to go the same was as .22LR loads:  Velocity and fast expansion.

I have a .22 Hornet, a slick little Ruger #3 falling-block single-shot wearing a Nikon scope.  I bought it as a fall turkey rifle, and it has served admirably in that function, but I have loaded a bunch of ammo with cast lead 45-grain bullets which punch a hole without expanding.  This makes shot placement critical, and honestly, I’d rather have just the little bit extra bullet diameter to make a slightly bigger hole, but I suspect most of that advantage lies in my own perception.  The fact is that the .22 Hornet, like the .25-20, is an excellent medium-game round for animals up to coyote-size at ranges of a hundred and fifty yards or less.

But like the .25-20, to achieve that full versatility on medium and small game, handloading is still required.  Current factory loads won’t handle everything that this round can do.

I think there would be a market for a quarter inch rimfire cartridge today.

It seems like the trend in rimfire loads now, including the .22LR as well as the various .17 rimfires and the .22 WMR, is aimed at two very different targets:  Uber-velocity rounds with explosive expansion, or dedicated target loads with solid bullets. 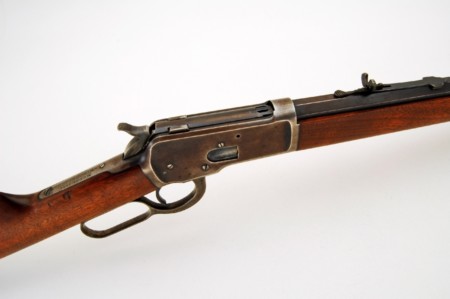 I’d love to see a larger-bore rimfire round firing a heavier bullet at moderate velocities, offered in revolvers and perhaps a good rimfire bolt gun like the Ruger 77-22 rimfire rifle.  This would be near-ideal small-game gun, for the sportsman or the landowner/farmer, capable of clean kills on animal up to the size of a raccoon or fox without being overly destructive on a rabbit or squirrel.

My ideal small-to-medium game rimfire rifle would take this form:  A lever or bolt-action repeater, chambered for a .25 rimfire cartridge tossing a 60 to 75-grain bullet at about 1,200 to 1,400 fps, easy to do with today’s powders.  The gun should have good open sights, preferable an aperture rear and hooded front, and be able to easily mount a low-powered, wide-angle scope.  The bullet should be a jacketed flat point for edible small game, with a hollow-point option for game like raccoons, foxes, or coyotes.  One could also have a “short” version of the cartridge for close-range work on smaller critters, or when noise is an issue.

So why can’t I have one?  Well, the nation’s gunmakers and cartridge companies are notorious for one thing:  They don’t listen to me.  And that, sadly, is just something I’m going to have to learn to live with.  In the meantime, I’ll keep my eyes open for a good original Winchester 92 in .25-20, which is likely to set me back a tidy few shekels; but I expect it will be worth it.