My Predictions for the Election

I thought it would be fun to put my thoughts down on what way each of the “toss up” states from RCP are going to go, and come up with my final predictions for the election going into it. So first lets set the game board. The following is a screenshot of RCP’s Electoral map as of 15 Oct 2020. 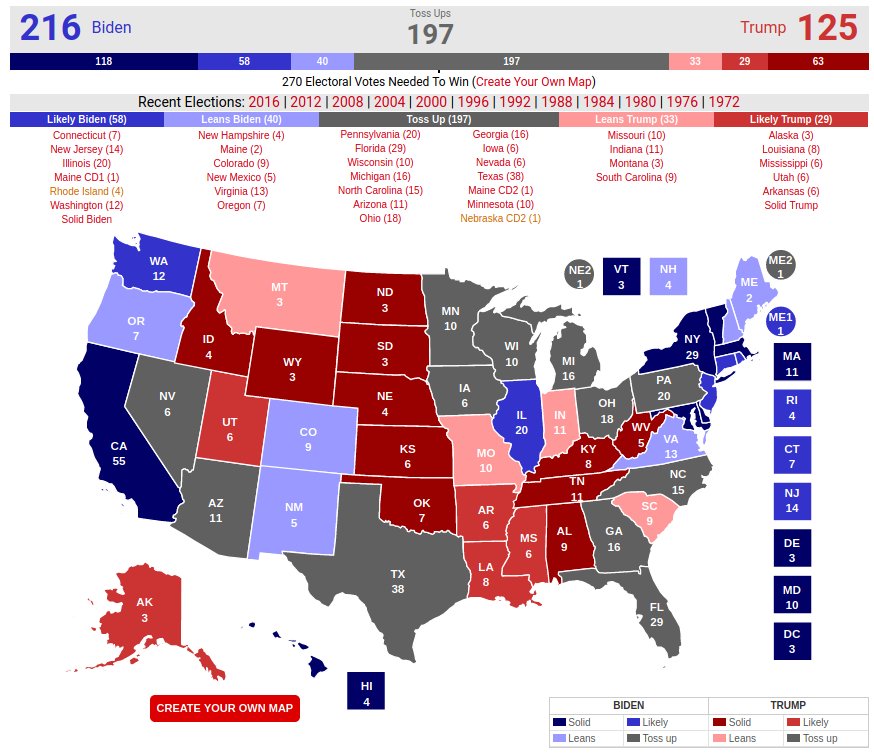 As you can see, RCP has 12 states, and 2 congressional districts up in the air, leaving 197 electoral votes on the floor. I’ll go over each and say how I think each will go down come Nov 3. Remember, these are just my predictions based off of the polling data, historical performance, my gut feelings and the entrails of my neighbors pet peacock. If you don’t like them, take solace in that I’m almost always wrong.

Lets start with the two Congressional Districts. They may seem like not much, but I think they could be playing an out sized role this election.

Statewide is pretty solid for Trump, and Trump took the state +30% in 2016. I feel pretty confident that even that is too much of a lead for Biden to beat. I call this one for Trump.

This one is a harder call. Biden has a lock on the statewide vote, but Trump was able to take it +10% in 2016. Even though the CD looks like it will stay in Dem hands, I think this one goes to Trump again.

Ok now to the states:

Hillary pulled this one over Trump in 2016 by 2.4%, with Gary Johnson taking 3.3% of the vote. The lackluster performance of Jo Jo’s campaign may provide Trump a boost, but i don’t think it will be enough. Add in that the State Legislature has enacted that mail in ballots can be sent in up to 2 weeks after the election, I think this handily goes to Biden.

The Blue Jewel of the Night. The Democrats are delusional if they think this is going to go to Biden. I call this for Trump

This one I’m basing off what I’ve seen from some early voting results. It seems like Trump has faltered a lot on this one. I don’t know why everyone is supporting the party locking them up. But that’s what it looks like. This is the first one that I’m calling as a flip. This one goes for Biden.

We are starting to get into the harder to call races. This one however looks closer, in my opinon, than it really is. This is mostly due to a Quinnipiac poll that put Biden up +7.  Quinnipiac is usually pretty poor in their polling, and the idea that Biden will pull a vote by +7 in a state Obama lost by seven points in 2012 is farcical. I call this one for Trump.

Will North Carolina go the way of Virginia? I don’t know. I flipped a coin. It came up heads. This goes for Trump.

I’m really conflicted on this one. The polling is just awful for Trump. However I have a contact in and around a more swing district of Pennsylvania and he says the enthusiasm is off the charts for Trump. I’m not sure, but I reluctantly call this one for Biden

Biden seems to be doing well here, but I don’t think Biden can make up the 10 point deficit Hillary had in the state. I call this one for Trump.

Ohio has become more red over the past few years. But with the likes of DeWine running the state, it might be purpler than I thought. Still I think it will be tight, but my prediction is Trump just barely make it.

The big prize of the night. A win in Florida for Biden would be a coup-de-grace for Trumps election bid. However I think Biden has failed to do enough distancing from communists and the antifa rioters for the comfort of the Cuban population. I think this goes to Trump. But if it goes to Biden then it’s game over.

We’ve gotten down to the last 3, and I think some of the most important states in this election. We are at 258 for Biden and 249 for Trump. The winner needs to win 2 of the next three states.

I know the polling is just awful for Trump. I just don’t want live in a world where the people of Kenosha (looking at you Don) decide to go with Biden after antifa and other leftist rioters come and burn their city down. Especially with Biden refusing to condemn antifa. So for that reason and none that actually makes any sense (and maybe for the good ratings) I say this goes to Trump.

Down to the last state. I would like to say the same thing about Minnesota regarding the riots. However this is the same state that has elected Kieth Ellison as AG and Illhan Omar to the House of Representatives. With no offense made to our Minnesota nice Glibs, I don’t think they are going to care. I call this one for Biden.

So their you have it folks. My election predictions. Biden wins with 279 to 259. 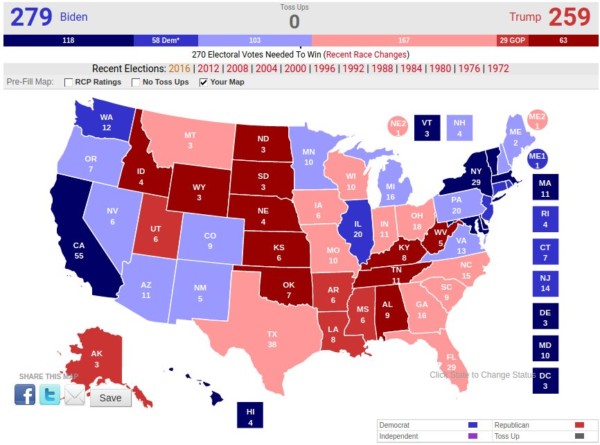