Back of the Napkin: CO2 and Paris

In light of the new Biden administration’s commitment to have the US abide by the Paris Agreement on climate change, I thought it might be interesting to take a little look into CO2 emissions by country.  For the purpose of this exercise I took data on CO2 emissions from the EU’s Joint Research Center (source).  The Europeans seem to be the most concerned about this issue, so I figured they should have the best data on it (and since the data is European, note that the tons mentioned throughout are metric tons).  To derive per capita data and per $GDP data, I took population numbers from Wikipedia and took GDP numbers from the World Bank (source).  I chose to look only at the top 20 largest CO2 emitting countries, but since they collectively contribute 78% of world CO2 emissions I figure this is sufficient to get an accurate look into current trends on the matter.  For the charts I pared this down to the top 10, as 20 was a bit too unwieldy for visualization. 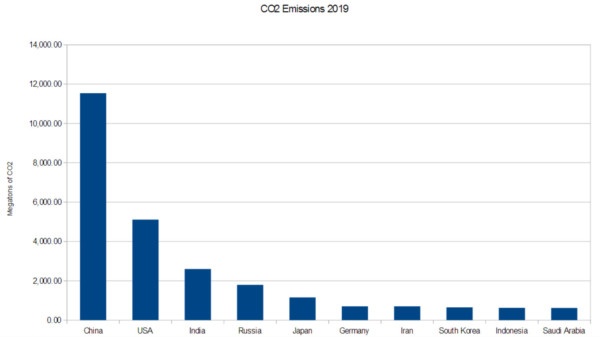 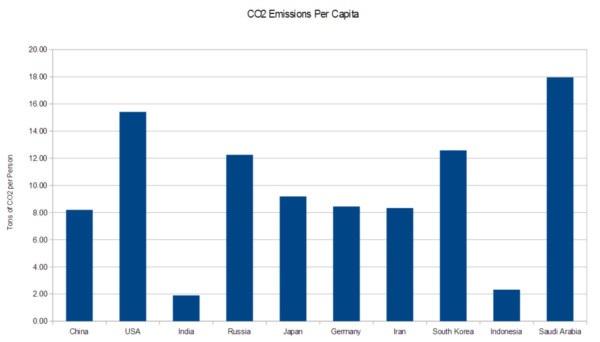 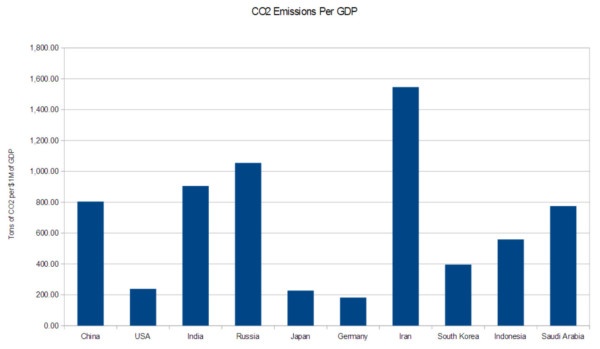 The Paris Agreement is the latest attempt at a globally-coordinated response to the issue of climate change.  Drafted under the auspices of the United Nations in late 2015, it was ratified and went into effect in 2016.  The gist of the agreement is that each country will set its own targets for reducing its CO2 emissions over time and adhere to those targets.  The agreement has no actual enforcement mechanism, which combined with the fact that each country is responsible for setting its own benchmarks means that in effect it is a toothless statement of intent, and not much more.  The agreement also includes encouragement for more developed nations to help less developed nations reach their goals through grants and other financial measures, pledging $100B per year towards this effort (although, again, no enforcement mechanisms).  This agreement has been accepted by all but six nations in the world. 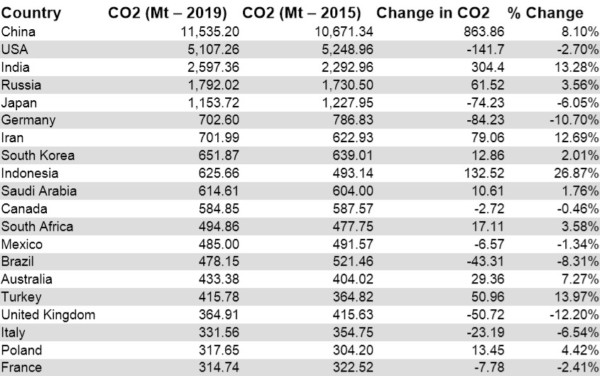 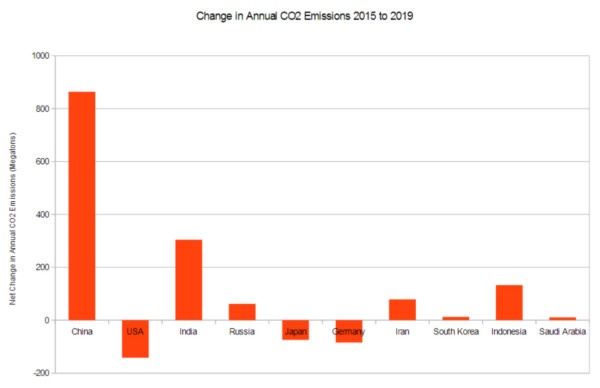 Or is it?  If CO2 emissions are an actual issue, then this agreement has so far been an abject failure at curbing them.  All of the reductions made by nations committed to reducing CO2 have been wiped out and then some by nations less interested in this endeavor.  But, money has still changed hands, with billions of dollars going towards green energy and carbon mitigation efforts in the developing world.  From the perspective of developing nations, however, this has been a success.  Not only have they gotten handouts, but they have been able to continue to develop their economies with the CO2 intensive energy sources that produce cheap, reliable energy that is the lifeblood of the modern world.  Perhaps their leaders do not see CO2 to be as much of a problem as the climate crusaders see it.  Or perhaps they are making the calculated choice that if they make their nations rich that they will be able to deal with the issues caused by a warmer world.  Even if the worst came to pass and the current ice age ended with the complete melting of the polar ice caps, most of the land in the world will still be above water.  It would be a major disruption, but humanity has adapted to greater change in the past.  And it is always easier to adapt if one is rich rather than poor.  Until a suitable (reliable, abundant, inexpensive) alternative to CO2 emitting power generation can be developed, it is probably safe to say that the world will continue increasing its CO2 emissions year over year as more and more nations develop and bring their citizens into modern standards of living. 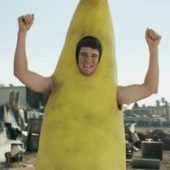