Funny how a fella goes from here to there.  I rode into Carson City real late last night, and it would have taken another couple hour to ride out to the place.  Horses were tired, I was tired, and so damned if I didn’t pass the night just like I had been doing before I took off looking for Spanish gold – sleeping in the stable stall with my horses.  Could have took a room at the hotel or above the Dollar saloon, but figured I’d save my money.  Slept plenty of worse places, and that’s the truth.  The straw was fresh enough and the stable warm enough that I passed the night all right.  Now it’s early morning.  Still an hour before sunup, I bet, but I was antsy, couldn’t sleep any more.  Just walked over to Miller’s Café, they open early, and got something to eat.  Now I’m about to saddle my horse, ride out to the place, and see Isis.  It’s damn well long past time. 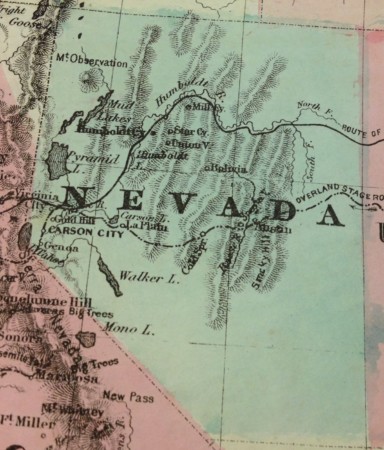 A bird flew in front of Bob, making his horse shy up for a moment.  “Come on, you goddamn stupid beast,” he said, but good-naturedly; the horse was, after all, just being a horse.

There were a few patches of snow on the ground along the trail west out of Carson City here and there, in sheltered spots.  Bob had heard tell that the blizzard that hit Pyramid Peak up in Canada had just been a snowfall here, and the weather had turned mild since.  Now, with the morning sun rising behind him, Bob felt like there was a fine day coming on.

Going home, he thought for the hundredth time that day.  The idea that Isis might not welcome him back had occurred to him, but he dismissed it – somehow, he knew that this was the right time to go back.

And the wad of bills in his wallet surely wouldn’t hurt, either.

As was his habit, he thought as he rode.

Never did understand how a woman can have such a hold on a man, he mused.  Not just by his pecker, neither.  Isis, she’s got a hold of my heart.  And my head.  And my life.

Wonder, did she know just what she was doing when she sent me away?

Up the trail towards him came a farm wagon pulled by two mules.  Bob recognized the couple on the wagon.  “Mister Henderson,” he greeted them, “Missus Henderson.”

“Why, Bob Allen,” Chuck Henderson said, eyes wide.  He pulled the mules to a stop.  “Haven’t seen you in some time, figured you’d moved on.  Are you back home now?”

Bob reined in his horse.  If his old neighbors – Neighbors, hell, they live four miles away, he remembered – but if they wanted to talk, Bob figured he could spare a few minutes.

“We see your wife now and then,” Elmira Henderson added.  “She’s done a pretty fair job of keeping the place up.  I hear tell some of the younger local men have come around a time or two, looking to shine her up, but she’s sent them all away right smartly.”

Bob considered Chuck Henderson’s question for a moment.  “Was gone up north,” he said, deciding to go with the truth – or most of it.  “Had a job of work to do up Canada way.  It’s done now, so I’m heading home.”

“I’m sure you’ll be glad to be home,” Elmira said with a smile.  “Well, Charles, we’d best be off – need to move on, if we’re to get our trading in town done and back before evening chores.”

“You’re right,” Chuck agreed.  “Well, Bob, welcome home.  Glad to have you back.”  Bob tipped his hat as Chuck Henderson snapped the reins to get the mules moving again.

Bob looked up the trail.  It wasn’t far now.

Another mile, and he came to the crest of a ridge overlooking the Clear Creek valley.  Below, a mile and a half away, he could make out the outline of his cabin and his truck field in the morning sun.  He thought he saw someone moving, in the meadow by the creek.

A cavalry scout’s spyglass resided in one of his saddlebags, so Bob pulled it out, snapped it open with an ease borne of long experience, and looked.

And there she was.  Isis was walking back from the creek through the lush meadow.  Right there where the creek floods that flat every spring, Bob realized, and where all the wildflowers come up when it drains dry.  Prettiest spot on the homestead.  Fitting I’d see her there, even if everything is brown and dead right now.

At the bottom of the hill the trail went through a small stand of poplars.  When Bob had ridden through them, the cabin and fields lay before him – and there was Isis.

Her hands were dirty.  She had clearly been up and working for a while, but sleep was still in her eyes; her long, black hair was still rumpled.  She was wearing her old dress, the one she kept for choring.

Prettiest damn thing I’ve seen in the last eight months, Bob said to himself, and that’s for sure and for certain.

He rounded the last bend.  Isis heard the hooves approaching as she was walking towards the cabin with a bucket of water from the creek.  She stopped and looked towards the road.

Yep, Bob realized, she still has that same hold on me she always did.  Strong enough to send me into the teeth of a blizzard chasing an impossible thing, just on the chance she’d take me back.  And hell, I still don’t know if she even will!

He booted his horse and rode on in.

She was there in the meadow where the creek used to rise.

Blinded by sleep and in need of a bath.

I came in from the East with the sun in my eyes.

I cursed her one time then I rode on ahead.