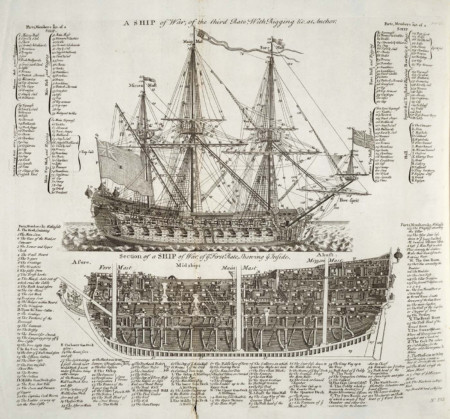 Per Swissy’s request for me to post excerpts from my books because we are running low on content, here we go.

A tertiary character, Maarten Gjaltema, is a Dutch pirate who often sails with Fury. He sails a fourth-rate.

The three of them are grappled together in the middle of the ocean whilst they are becalmed, to have a few days of merriment for however long they are caught without wind.

“Captain, I need to speak with you privately.”

Celia stood in her door looking at her second lieutenant soberly. It had to be dire for Papadakos to rap her door at midnight whilst she and Judas were clearly in the midst of bedsport and the crews were only at the beginnings of the night’s festivities. “Aye, Paulo. Come in.”

She opened the door wide and turned to cover her body with the kimono hanging neatly over the back of a chair. She cast a strained smile at Judas, whose face betrayed his tension. Of course he would know this was no trifle.

“If you would be so kind … ” she murmured, gesturing vaguely toward the door.

His dark eyebrow rose, but he said nothing whilst he pulled on his breeches and complied with her request, closing the door softly behind him.

Papadakos took a deep breath and drew close to speak very low. “Two of the boys were getting into trouble aboard the Silver Shilling and overheard plans for the mutiny of Captain Judas.”

Celia gasped. “Are they sure?”

“What in God’s name for? He told me he would rather kill than flog, but—”

“His hold is full of gold—and that’s the only thing in it.”

Celia’s breath left her in a whoosh and she sat on her bunk, a trembling hand over her open mouth. “God’s blood,” she whispered, horrified.

“Just before the Silver Shilling reached us, she’d taken a fleet of British warships bound for New York.”

Soon enough she was faced with two terrified ten-year-olds who stuttered and sputtered through their story, sobbing and hiccupping. She wasn’t sure if they were frightened of her punishment for being where they oughtn’t to have been or of the men they’d overheard whilst they explored the Silver Shilling’s orlop.

She suspected the latter.

She speared the German boy with a glance. “Your English is not savvy,” she growled. “Are you certain?”

The child gulped. “They were speaking Vlaams, Cap’n.”

Good Lord. ’Twas the mercenary marines, who were mostly some German variant. Damn the man for his inability to deviate from Royal Navy protocols.

Celia sat still, looking at the floor and searching her mind to put together some counter to this. “Thank you, gentlemen,” she said absently. “Leftenant, give these two an extra ration of grog and bread, and bid Captain Judas to join me.”

It was only a few moments until Judas had seated himself beside her on her bed. Celia did not know how best to impart such news but bluntly:

“You are about to be mutinied.”

She gasped. Her head snapped up to see him calm, a bit of a smirk on his face.

“What I do not know,” he continued cautiously, his slight amusement gone, “is by whom.”

“My boys tell me they overheard Flemish.”

He nodded somberly. “Aye, then, now I know who it is.”

“This is what has you so taut?”

“Only since we took our last prize.” Celia said nothing. “I … have put down a few mutinies in my career, but never have I been mutinied nor have I known of one solely over cargo. I assume, then, you also know what I have in my holds.”

She nodded impatiently. “Surely, you must have known before you took the pay fleet—”

“Of course I did,” he scoffed. “You asked me why I carry a full complement. That is why. I needed every sailor and soldier I could get my hands on to take that fleet. One first-rate and two second-rates.”

Celia gaped at him, a feeling of utter awe leaching into her body. “You—” she squeaked. “Alone?”

His eyelids lowered and he gave her a smug grin. “Aye,” he drawled. “Three men o’ war down, twenty-three hundred men. Sinking the patrol frigates in Virginia was child’s play by comparison, as we were preparing for much bigger prey, but it was an excellent drill.”

“You knew that fleet was there!”

“I did, and I was actively hunting it.” He wrapped his hand around her head and brought her ear to his mouth. Celia closed her eyes in utter ecstasy. “But I thank you for your lessons in piracy all the same, Madam.”

She jerked away from him then, jumping up from her bunk to stalk across her cabin. “You played me for a fool,” she hissed.

“Oh, ho!” he chortled. “Says Fury Prometheus, bringing the fire of piratical wisdom to hapless, helpless, idiot British Navy commanders. Do not make the mistake of believing you and the Hollander could take me.”

It happened not quite one week after the wind had arisen and they set sail, Fury close to larboard and the Hollander close to starboard. Tensions were mounting. Elliott could feel it in his bones and had signaled both ships and his officers to be ready. Even though he knew they were making battle preparations, he had not been able to discern it.

The dozen leaders, a mix of soldiers and sailors, drew their swords and charged the quarterdeck, dozens more men following—

Only to be killed by shots coming from the ships on either side of the Silver Shilling.

Gunports slammed open and cannons popped out. Gunners flocked to the swivels. Archers displayed tar-tipped arrows and the braziers prepared to light them.

“AVAST, MUTINEERS!” Fury bellowed from the platform of her main mast.

The dozens of men stopped cold and looked around. Elliott’s loyal crew had some of them at swordpoint, but there were more than Elliott had anticipated and the rest of his crew had not come abovedecks. That could only mean there were more below.

“One more step,” she roared, “and we will sink your little boat the way we did the British fleet.”

One of the mutineers ordered the Silver Shilling’s gunports opened, but … silence.

“They’re bolted shut, gentlemen,” Elliott said calmly. “You just sold your lives for a measly extra share, which I would have given you as a bonus anyway, had you not been so greedy.”

“And stupid,” the Hollander called, his Dutch accent heavy with disdain.

A soft whiff and thud pierced the relative silence. A soldier looked down at his chest where an arrow stuck out from his heart, then he toppled over. A flurry of steel-tipped arrows sent the rest of the mutineers scrambling and crying for mercy.

“Get the rest of them up here,” Elliott snarled.

Fury merely stood high above, arms crossed over her chest, and watched as man after man was brought forward and shackled to the previous one.

Elliott clipped down the stairs to the main deck and, furious, picked up the chainshot at the first captive’s feet and held it out to him. “Hold that.”

The second he took it, Elliott picked the man up and heaved him over the rail.

The clang of chain and ball as it scraped against the rail as the screaming men went overboard one after another, faster and faster until the last mutineer went over the side with a great splash.