Yet Another Trip to the Range 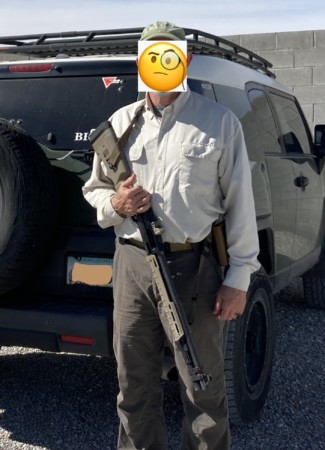 I did the two-day class in May, but the review did me no harm at all. I took advantage of the section on slinging and unslinging to switch to a, yes, tactical sling (shotgun across the front of the body), as it won’t slide off your shoulder that way and can just be raised and mounted without doing anything to the sling.  Less fiddling and fumbling is a good thing.

The class was 35 people, no women this time.  16 stuck around for the full four day class.  Age and experience ran the gamut from early 30s to mid-70s, and from a competition shooter and bird hunters with thousands of rounds downrange to “I’m thinking about buying a shotgun, so I rented one” (he was my training partner, and will be buying a Beretta 1301; I should get a commission).  I think the experienced shooters were surprised by how much they had to adapt to the heavier buckshot and slug loads.

The Beretta 1301 ran like a charm.  Since May, I changed my sight mount and sidesaddle shell holder.  I had a Mesa Tactical picatinny rail with attached sidesaddle, but with the weight of the shells off axis, it would work the mounting screws loose, so I switched to the Aridus Industries mount (strongly recommended if you are going to try a red dot sight on a 1301) and a “stick-on” velcro sidesaddle from Brownshirt Tactical.  I was not excited about gluing something to my shotgun, but I have read that just about all the screw-on sidesaddles suffer from working loose.  The ability to rip off an empty shell holder and stick a new one on is pretty handy, and fully loaded they fit into a standard AR mag pouch, which is nice.

We had a discussion about how to train on malfunctions.  Malfunctions are either a failure to feed from the magazine (solved by racking the bolt), or a failure to eject a spent shell (solved by rolling the shotgun to the right and racking the bolt, the “rack-roll”).  One doctrine is “look, rack-roll, shoot”, which I gather is typical for law enforcement, at least.  Front Sight teaches “look, rack-roll, decide to take the shot”, because while you are fiddling with your gun things can change.  “Look, rack-roll, shoot” has resulted in bad shoots when somebody steps into the line of fire in that second when you are clearing the malfunction.

I have a Trijicon red dot on my shotgun, and if you have money laying around with nothing else to do, I suggest you try a red dot sight on your shotgun.  They are fast on target, and since mine “co-witnesses” with my iron sights (that is, you see both at the same time), for longer shots it adds up to very good accuracy.  They do need to be zeroed, my least favorite thing to do at the range.  I have a laser bore sight (drops into the chamber), and I was dead on after zeroing with that at home. 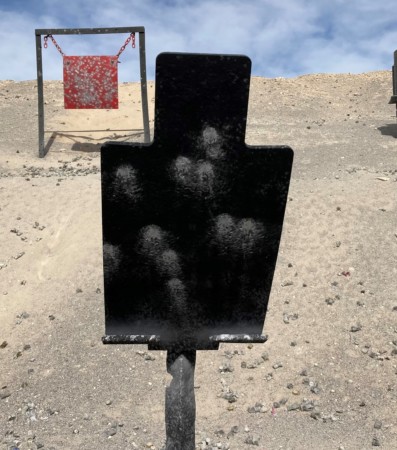 You also pattern your shotgun at Front Sight, to learn how far you can take a shot with 00 buckshot without pellets going wide of your target.  I brought some of my Federal “Flight Control” shells for this, as they are supposed to put up a tighter pattern.  They live up to the ad campaign.  The target shows four shots from the patterning exercise.  The torso is from 20 yards (all nine in the target, with the proverbial 9th pellet flyer at the lower right).  If I ever get my mitts on the semi-mythical 8-pellet Flight Control, I should be good from 25 yards, maybe a little further.  The head is from 10 yards, again all on target.  Only the people shooting Flight Control had clean headshots at 10 yards.  The upper right is from seven yards, and shows two pellets just outside the main pattern.  The upper left is from five yards. 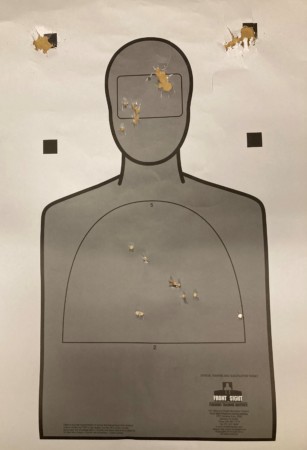 The drills (and test) include multiple targets – two, three, and four in a row.  What was really interesting here was the difference between birdshot “training” loads and 00 buckshot loads.  Birdshot, I could basically move the shotgun in a straight line across the targets with little correction after each recoil.  Buckshot was a different story, as the recoil is, well, significantly more.  It really tests your stance and how well you have mounted the shotgun (spoiler alert: my stance and mount were somewhat exposed with buckshot).  I should note that I don’t use the nancy “low-recoil” loads – I want my slugs and pellets to leave the barrel as angry as possible.

I managed to score high enough on the skills test to graduate, although not with distinction (this time).  The slug test involves swapping out a buckshot in the chamber for a slug, and then firing, all within 5 seconds from 50 yards and 4.5 seconds from 35 yards.  It was very clear to me I wasn’t going to make the time limit and still hit the target, so I concentrated on landing all six shots (yes, when I heard the sixth one ping on the target, there was a fist pump).  I did not get extra credit for my headshot from 50 yards (which, to be fair, was pure luck).

The rest of the shooting test was with buckshot.  After nearly four days of shooting a 12 gauge shotgun, I was tired, I’m telling you, and my mounting and stance were sloppy, so I gave up some points there.  Fortunately, stance and mounting are things I can drill in my garage with an empty gun.  The time limit on four targets from 15 yards is 2.5 seconds, and I missed the time on one multiple target shoot, and gave up accuracy on another.  There was universal agreement I had the saddest target of the day – it showed one single, lonely pellet hit.  (Pro-tip – when doing multiples, don’t shoot at a clean target).

There was also a brief session on room and house clearing.  They said it is extremely dangerous, and not to do it unless you have family in another part of the house.  Of course, Mrs. Dean’s bedroom is all the way across the house from mine (apparently, my snoring is that loud).  And my house is a tactical nightmare of dead spots that you can’t clear without being exposed to uncleared areas.  At least with the Dean Beasts I can probably just go to wherever the screaming and begging is.

Bottom line: the shotgun is my preferred weapon, and I now feel confident enough with it to keep it loaded and ready to roll in my bedroom.