During these years of stupid, I have rediscovered one of the finest joys. And that is sitting in my basement, shooting an air rifle at an Olympic (almost) range. I can sit and shoot all day for less than it costs to get to the nearest shooting area, range or hollow. I can do in it the relative comfort of my own house. I can do it in rain, snow, or sleet. 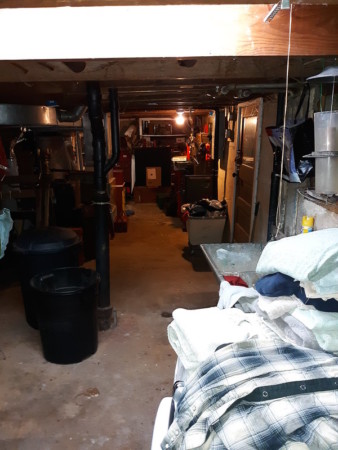 Now, I will fully admit that I am fairly lucky to have a full-length basement, but the fundamentals of air gunning are so easy to apply, anyone can do it in the comfort of their own domicile, no matter if it is a house, an apartment, or a recreational vehicle. All you need is a fairly long, straight part of the area, a pellet trap, pellets or BB’s, and something that shoots them.

Without getting too deep into it, air guns of one sort or another have been around for millennia. Blowguns that natives use to shoot poisoned darts? That is the basics of an air gun; using compressed air to launch a projectile. And we have all heard about the bellows gun used by the Austrian army and carried by the Lewis and Clark expedition. The basics of the spring piston-style gun were developed in England around the turn of the 20th century and developed by British gun-making goliath BSA. And lately, the CO2 and PCP guns have been taking the whole field to new heights.

The three basic types of air gun are the Spring Piston, where a spring launches a piston in a compression chamber, causing a pillow of air to send the projectile down a barrel. These range from the Red Rider lever action BB guns to the fancy European break barrel and side lever types, such as Walther Luftgewar and GAMO. Pneumatic, where air is drawn into a chamber and stored, only to be unleashed all at once to send a projectile down a barrel. This type of action comes in two types, the pump, an example of which is the Crossman that we all remember from our youths, and the PCP or Pre-Charged Pneumatic, where the air is introduced to the storage chamber via a mechanical method and is enough for multiple shots or extremely high-powered shots. These rifles can shoot calibers up to .50 and are now being used to hunt large game such as deer. Finally, CO2 guns use compressed, inert gas to propel the BB or pellet. This comes in little cartridges that are inserted into the gun, adding cost but making repeat shots easy and not taking up much valuable space.

We all know about BB’s, .177 steel balls. Most of us are also familiar with pellets, the wasp-waisted ammunition of the typical air rifle or pistol, which come in wadcutter for target shooting, domed for plinking, and pointed or hollow pointed for hunting and pest control. What most people don’t know are the sizes these come in. The most common is .177, closely followed by .22, with .25 a distant third. By the way, these three sizes were referred to as no. 1, no. 2, and no. 3 in older English guns, in case you were curious. Also, those same English guns don’t follow the metric system, so while the .177 was derived from the continental 4.5mm, the original .22 was 5.6mm, not the 5.5mm that is now used. This can cause confusion, inaccurate rifles, and headaches when trying to source pellets for older British and American guns. Fortunately, Marksman in Great Britain makes a special batch in this size, and older Crossman pellets fit the bill over here in the U.S. Pellets tins can be very collectible in their own right, with great artwork being the norm for the lids. The much larger and more powerful PCP guns will also use slugs of varying sizes, some going up to .50. These resemble black powder projectiles, in both looks and performance.

The uses and pastimes for air guns are many, and they range from simple backyard plinking at beer cans with an old BB gun, to hunting vermin and small game within city limits with a spring-piston .177 or .22 pellet gun, to more advanced sports such as Field Trials, a variation on golf much like Disc Golf or Sporting Clays. This basically consists of moving from shooting lane to shooting lane and hitting various small steel targets at different distances that are designed to fall over when hit at a specific kill spot, and they can all be reset for the next shooter from the firing line. Running Boar is a mainly European, indoors pastime, which consists of a series of moving targets scrolling across a shooting gallery, and each one needs to be hit to score. And then there is my favorite; Ten-meter Olympic-style shooting. Imagine a bullseye the size of the period at the end of this sentence, .5mm to be exact. Now, try to see this target from 36 feet away. No scope, just iron sights. Oh, and each shot is timed, not excessively so, but enough to put pressure on the shooter. I suck but am slowly getting better at a few shots per day. This is pretty easy to do, as I have set up a 10-yard range in my basement. These are just a few of the activities you can do with air guns, and as you probably noticed, you can do them at home, in your backyard, basement, down the hallway, or anyplace discharging a powder firearm is either idiotic or illegal.

I shot air guns as a kid, as my father had a Crossman single-shot pistol, a .45 auto lookalike that we spent hours with, sending BBs into targets, cans, lizards, and whatever else we found shootable. Later, when I hit junior high age, I was given a Benjamin model 317, a multi-pump .177. And while this isn’t the pinnacle of American air guns, that would be the similarly designed and manufactured Sheridan, it was real. Real wood, real blued steel, really accurate. That, in turn, was replaced by an Ithaca 37 shotgun, which lead me down the road to powder arms, which I still love and enjoy to this day. But two things brought me back to the world of compressed air.

The first was a regular shooting trip up to the mountains. I have never really liked formal ranges, something that stems from my father having 40 acres in the California foothills when I was in high school and college. It was quite easy to head out to the property and blast away at targets or go hunting jackrabbits in the scrub any time I had a free afternoon. With the only Rangemaster being myself or friends and family, I never had to deal with others deciding when a range was hot, worrying about my quick draw techniques, or any other issues. This didn’t stop me from practicing safe shooting, as that was burned into my brain at a young age by my father. In any case, I was out in the mountains, and while doing some .22 practice I noticed I had developed a flinch. Not cool, and was something I needed to work on.

The second thing was my wife’s vegetable garden. And the Nutria who decided to feast on all her efforts. I cannot shoot a firearm within city limits, but I can shoot a pellet gun. And a nice .22 BSA soon filled this corner of my armory. I quickly remembered how much fun shooting these weapons is. Quiet and cheap, as pellets cost less than $10 for 250, and as I said, you can do this at home. Since then I have added a Webley MK2 pistol from the late ‘20s, two Slavia’s, which is CZ’s air gun branch, two Benjamin’s, one a .177 pistol and the other a .22 rifle, both multi pumps from around 1950. I am sure there are more to come. 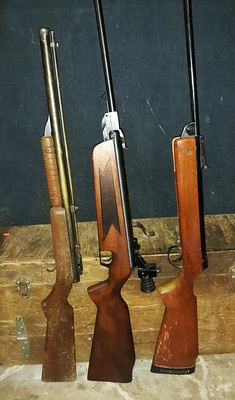 I have a fairly large basement, and so I set up a shooting lane, quickly and easily. Granted, I need to shoot around the sewer main, but I have my super cheap pellet trap that consists of a cardboard box filled with shop rags and backed up by a piece of 2×12, with a plywood stop. Perfect for my purposes, and it also is so quiet that I can shoot early in the morning when my wife is still asleep. A word to the wise, if you are going to do this at home, start shooting at your trap from around five feet away, as you want to make sure that your sights are actually pointing your shots in the right direction. But, if you have a garage, a long hallway, or as I have, a long basement, you have a good air gun shooting range. Just remember, it is a range, and these are weapons, treat them the same as any other gun.  Always obey the four rules of gun safety:

If this appeals to you, then I am going to make a couple of recommendations. While air guns can be quite expensive, as a new Feinwerkbau or Walther can easily run you well into the thousands of dollars, there are much cheaper places to start. For pistols, I would recommend the Browning Buckmark URX, a spring piston, break barrel single shot, so there is no CO2 cartridge to mess around with, and while it may be made of plastic, it is a great introduction to the sport and usually retails for less than $50. For rifles, I would start with the Crossman Optimus, another break barrel that comes in both .177 and .22 for around $130, though I would ditch the scope, as combo packs like that never contain good optics. Now, you might notice that I prefer spring piston pellet guns, and both of those listings are on the Pyramid Air website, a great place for all things air gun. And there you will find air guns that appeal to all tastes, from high-end competition guns from companies such as Anshutz, or full auto BB replicas of famous machine guns, great for blasting away  And I will say, as much of a vintage fan as I am, I do have my eyes on this bad boy: a Hatsan BullBoss, a bullpup, PCP rifle in .25 with a built-in silencer. (No, I don’t own or have stock in Pyramid Air, they just have a great website.)

Oh, you noticed I said silencer, did you? Well, air guns are treated differently under the law.  Based on Section 921(a) (3), air guns, because they use compressed air and not an explosive to expel a projectile, do not constitute firearms under Federal law — unless they are manufactured with the frames or receivers of an actual firearm.

This means that they can be shipped across state lines, do not need to be transferred via FFL, and can be suppressed. But one word about that, the silencers cannot be able to be used on a firearm that is covered under the NFA. So, they need to be permanently attached, basically. Also, keep in mind that wherever you live might have its own laws regarding compressed air guns. For example, NYC still requires you to register them with the local police. So, be informed.

In the end, air guns are not quite the same as shooting firearms, but they are a great way to work on your shooting skills and techniques in the comfort of your own home, have fun, and do this on the cheap. At least as far as ammunition goes. You are on your own for what you want to spend on the gun.

Zwak, who taser's the chimp with the razor.