When the invasion of Europe was only days old, the Germans dug in around the French town of Falaise.  The Kraut 7th Army and 5th Panzer Army were trying to hold a corridor open to the east so the bulk of their forces to escape.  In the north, the British and Canadians were given the job of pushing south while the Americans moved up to meet them, to close the gap.

As part of the Canadian 4th Division, C Squadron, 29th Armored Reconnaissance Regiment, the South Albertans, had struck southward out of Caen like a thrown spear.  In one of the lead columns was the American-made Sherman tank in which Corporal Ted Paige of Edmonton was gunner and Lance Corporal Albert Maskwa of Fort McKay was driver.  They were one of three Shermans assigned to take a small village, La Hogue, that lay in the divisions line of march.

“I miss the old Ram tanks,” Corporal Paige shouted over the roar of the tank’s Continental engine.

“Why would you miss those old pieces of shit?” shouted Private George Lesk, the assistant driver.  “Lot more room in the Sherman.”

“Yeah, but they were ours.  This is a Yank machine.  Seems like we ought to be able to build a good a tank as the Yanks, eh?”

Like any good gunner, Ted kept the turret moving as the tank advanced through a field bordered with woods.  He was looking for targets.  Behind him the loader, Private Alex McDonald, sat patiently waiting.  The tank commander, Sergeant Bill Gage, was standing in the turret, scanning the countryside with binoculars.

“Only the turret was ours,” Sergeant Gage called down into the turret.  He spoke without taking the binoculars from his eyes.  “The rest of the tank was American.  May as well just have the newer machine.”

“Yes, Sarge,” Ted sighed.  He looked down and to his left.  His buddy Albert looked over his shoulder and grinned, revealing crooked yellow teeth.  Albert had been Ted’s best friend since they both joined the Regiment, two years earlier, and just prior to D-Day had managed to finagle their commander into assigning them to the same crew.

Ted hooked his thumb up to indicate the Sergeant.  He rolled his eyes.  Albert snorted a laugh and turned his eyes back to the driver’s periscope.

The two men could scarcely have been more different.  Ted was a short, thick young man, with a mess of curly blonde hair and blue eyes.  Albert, from the Cree nation in the north country of Alberta, was skinny, only an inch taller than Ted but forty pounds lighter, with a ruddy complexion, beady black eyes and a nose that appeared to have been broken several times. 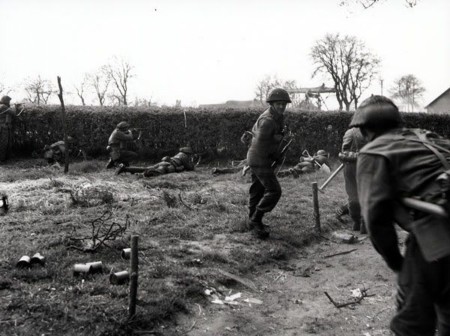 Both were anxious to face the Germans.  Neither had yet really found out what that would entail.

The radio crackled.  Sergeant Gage listened to his headset for a moment, then clicked his intercom mike.  “Halt here, Maskwa,” he ordered.  “There’s a village up ahead.  We’re to hold here and let the infantry lead into the village.”

“Stopping here,” Albert replied.  The tank ground to a halt, the engine running at idle.  Ted continued to use his gun sight to scan the trees to the left, and the small village to their right front.  He didn’t see any movement.  After a few moments, he saw the dismounted infantry moving up.  They were heading for the town.

“All right.  Move ahead slowly.  Stay behind the infantry.”

A loud CLANG to their right startled the crew.  Ted popped his head out of the hatch in surprise; to their right, another tank had staggered to a halt, flames pouring from the hatches.  The ammo began cooking off, blowing an obscenely prefect smoke ring out of the commander’s hatch.

“TARGET, ANTI-TANK, ELEVEN O’CLOCK,” Sergeant Gage shouted, his voice an octave higher than normal, betraying his surprise.  He was still standing in the turret.

Ted dropped back into the turret.  He cranked the turret around, looking for the gun.  He saw the infantry scattering for cover.  Ahead of them, somewhere, a German machine gun started buzzing.  Two of the infantrymen went down hard.

A flash from the open door of a barn on the edge of the village betrayed the location of the German gun.  The shell whizzed overhead; the Kraut gunner had shot high.  “IDENTIFIED,” Ted shouted.  He swung the gun to bear.  “Give me a Willie Pete round!”  Behind him, he heard Sergeant Gage slump down into the turret.

Alex McDonald slammed a white-tipped round into the gun and closed the breech.  “UP!” he shouted.

“ON THE WAY!”  The gun roared.  Albert immediately started swerving, zig-zagging the tank to protect them from return fire.

Ted looked back into the sight.  The barn was burning.  He saw a couple of smoking figures emerge from the structure, but the infantry cut them down before they could take ten steps.

Another tank fired a high-explosive round.  The German machine gun stopped firing.  Several Krauts were running now, in the street, trying to flee, but the two surviving tanks cut them down with their bow machine guns.

Ted finally looked back.  Sergeant Gage’s body lay slumped in the commander’s seat.  The second round from the Kraut anti-tank gun had neatly decapitated him as he stood with his head out of the turret.

They stopped that night in a small patch of forest south of La Hogue to let resupply of fuel and ammo catch up.  The company commander had come by, informing Ted’s crew that the tank that had been hit north of town was a total loss, the entire crew killed.  The commander stepped away from the tank, motioning for Ted to follow him.  He stopped underneath a small larch tree.

“I suppose this tank’s yours now, Corporal Paige,” the captain said.  “Can you handle commanding and gunning for now?  At least until we get some replacements forward?”

“Good.  There’s a re-arm/refuel point set up about two hundred yards due north.  Get your tank reloaded and refueled, we’ll be moving out soon.  That mad Yank General, Patton, he’s pushing up from the south.  We’re supposed to meet him somewhere east of Falaise.”

“We’re getting fuel and ammo.  Be moving out soon, I guess.  Probably be moving all night.  Supposed to meet the Americans somewhere east of Falaise.”

“Too much fun,” Albert replied.  His voice lowered.  “We cleaned up the turret as best we could.”  Sergeant Gage’s body had been removed from the tank an hour earlier.

The loader and assistant driver climbed up on the tank and disappeared into the hatches.  Ted stopped Albert before he could climb down the driver’s hatch.

“Sure,” Albert replied. “Anything.”

“I’m going to write a letter to my folks.  Just in case… well, you saw what happened today.  Just in case I don’t make it.  If something happens to me, would you take it to my folks in Edmonton after this is all over?”

Albert placed a hand on Ted’s shoulder.  “Sure,” he said.  “I promise I will.”  He looked thoughtful.  “It’s a good idea.  My folks are dead, I got no brothers or sisters, but there’s this girl, back up on the Reserve; if I write a letter, would you do the same?  If something happens to me?”

Albert grinned.  “If you go in the winter, dress warm.  Gets damn cold up there.  When the river freezes, they drive logging trucks on the ice, it’s so solid.  I was hoping to pick up a Kraut greatcoat for my gal, I hear they’re pretty good for cold weather.  If… well, if I do, I’ll tell you – get that coat out of my gear and take to her?”

Albert slapped his friend on the back and dropped down into his hatch.  A moment later, as Ted was climbing up onto the turret, the big Continental engine started with a roar.

If you go when the snowflakes storm

When the rivers freeze and summer ends

Please see if she’s wearing a coat so warm

To keep her from the howlin’ winds