More Random Thoughts, the Death of a Saguaro, Get Free Cocktail

We lost this massive saguaro at the Casa Dean last month.  It ripped down half of the tree when it fell, and I don’t know how the wall it fell on survived.  The landscaper who came to remove it said there were a lot of them down across town.  Apparently, they took up a lot of water during last year’s near-record monsoon, became top-heavy, and couldn’t take the high winds we got when a front came through. 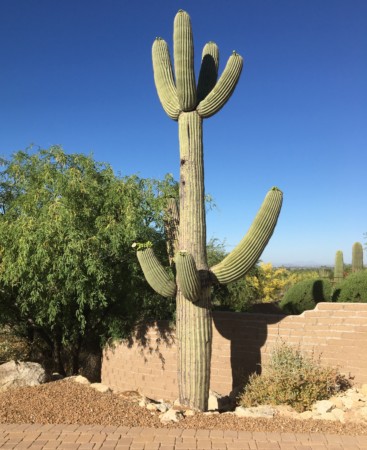 As a metaphor for a prosperous society not being able to withstand adversity, I found this to be depressingly on point.

About the only thing I have to say about Ukraine is, wow, has the Russian military ever underperformed.  I am confident that nearly everything I see is propaganda to some degree, but the basic facts seem to be that the Ukrainians haven’t lost yet, and are taking a bite out of the Russians.  “Russian military not the juggernaut everyone thought” strikes me as a good thing.  I can only hope that bumbling into a war with Russia is beyond the incompetence of even our unthinkably inept rulers.  Because, among other things, I’m pretty sure “American military not the juggernaut everyone thought” would be one of the takeaways.

COVID is over.  And not just, its almost completely disappeared from the news because it became a liability for the political side of the DemOp Complex.  We are down to less than 20% of the COVID patients we had just two months ago (and less than 10% of our all-time peak), and dropping.  The Omicron variant is pretty much what competent virologists predicted early on – eventually, viruses evolve to be less virulent and more infectious.  They were, naturally, ignored as inconvenient to the Narrative, and have been proven right.  Just like the people behind the Great Barrington Declaration.  In a healthy society, the policy-makers and opinion-shapers who have been proven wrong and inflicted such great costs would face consequences.  We, however, do not live in a healthy society.

There are many candidates for the root cause of our problems (and indeed, there are probably many root causes), but the one I keep coming back to is immunity from consequence.  Our soi-disant elites in government, academia, the Narrative machine of media and Big Tech, are (for now at least) immune from the consequences of their actions.  It is natural to want to avoid paying the piper, so maybe the real root cause can be found by asking, how this came to be?  How did we little people allow Our Masters to become immune from consequence?

The Great Divide between the urban/collectivist hive mind of the laptop class and their followers on the one hand, and the old-fashioned normies on the other, shows no signs of narrowing.  The sneering by laptoppers driving Teslas at people getting hammered by gas prices is just the latest, most obnoxious example.  The two incompatible worldviews continue to grind against each other, and I simply don’t see a resolution.  A non-catastrophic split into multiple nations or even some kind of tolerable semi-autonomy doesn’t seem to be in the cards, at all.  I find myself increasingly wondering whether its possible to “withdraw in place” from the ongoing conflict, or whether a physical relocation to a more rural community or to another country is the smart play.

This is just damage control, of course.  We seem firmly set on a course that will lead to currency, economic, and societal collapse, and when the US goes down, everybody will do down with it.  For the first time in years, I found myself pricing gold and silver coins (following my time-tested technique of buying high).  When my bonus shows up, some of it may go into the stash of “deep insurance” specie.  Maybe “junk silver”, but holy mackerel that stuff carries a premium.

For the moment, I’m not making much in the way of long-term plans – I’ll be working through the end of the year, and tend to think that making a big change shortly after retiring is generally not smart.  These are not normal times, though, so that rule of thumb may not apply.  We’ll see.  This is looking like ant time to me, not grasshopper time.  Winter is coming.  We’ll be lucky if its not the Burning Times that are coming. 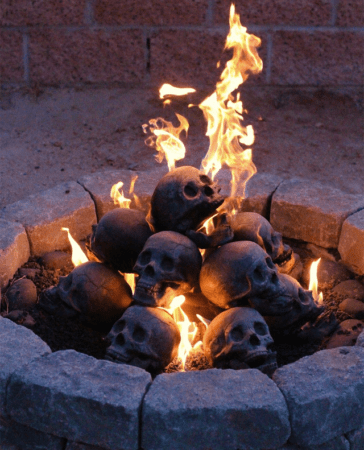 Cocktail time comes every day at Casa Dean!  This is a Tiki(ish?) recipe that I got from the Wall Street Journal.  It has a couple of specialty ingredients, which I usually steer away from, but I ponied up and gave it a go anyway.  It’s a “freezer cocktail” that you mix in advance and stick in the freezer for at least a few hours.  They had several variations; some served over rocks and some not, because they are already Zero degrees Americanheit when served.  Can recommend.

1 oz. passionfruit liqueur (they recommend Giffards, which was not available, so I got Chinola)

Pour everything in a jar, quick shake, stick in the freezer.  Should be fully chilled after 3 hours.  Serve over rocks in an old-fashioned glass.  You’ll need to give it another shake before you serve.

Damn good.  I drank way too much of the first batch in one sitting – this is a strong cocktail (note that there are no ingredients that don’t have alcohol).  That little bit of passionfruit liqueur is just right to give it some tropical fruit flavor without being White-Girl sweet.  I will be looking around for other cocktails I can use it in – its looking like this year’s cocktail experiments are going to be Tiki (ish).  Also, the freezer cocktail thing should work a treat for Manhattans, Negronis, etc. – just scale up your recipe.

Be of good cheer, my friends.  Storms always pass. 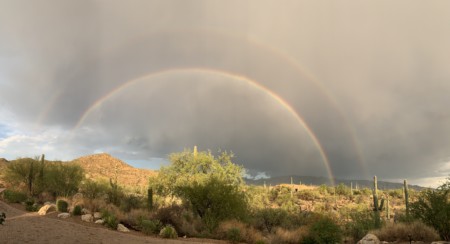