“Damn good thing we heard that on the radio about them waiting for us at the border.”

“Have to admit, it was the obvious thing for the cops to do,” Ad agreed.  “Never for a moment figured that bodyguard or whatever he was could have lived to talk to the cops, with all the lead I blew at him.”

The Thompson and the shotgun were now in the trunk of Penny’s Ford.  It was a dark night, two weeks after the botched robbery, and Ad was steering the Ford down a narrow dirt lane.  Penny and Ad’s descriptions were on every light pole, shop window and post office bulletin board in central Wisconsin.

“If we can get out of Wisconsin,” Ad offered, “some of the heat will be off.  If we can work our way over to western Minnesota or even North Dakota, we can probably find a place to wetback the border up there, get into Canada.”

“With a whole pile of American money?  Don’t you think the Canucks will find that a little suspicious?”

“You got a better idea?”

Penny didn’t have a better idea.

“We can’t exactly buy gas anymore,” Penny replied, again for the fourth time in an hour.  “Guy at that last place recognized us, I’m sure of it.  Just lucky we got away from there in time.”

“I been thinking about that.  If we can find a farm that’s using a tractor, instead of horses, they may have a gas tank.  Some of the farmers up this-aways are starting to keep gas tanks on the property for filling up their tractors and trucks.”  Ad was suddenly reminded of walking behind two plow horses on his old man’s forty acres in Oklahoma.  Wonder if he’s been dusted out yet, like so many of them.  Or the bank shut him down.  Wonder if they’re even still there?  Hell, Grandma might be dead.  Nobody’s told me anything.

He forced himself to stop thinking about that.  Not like they made any effort to let me know what was going on these last six years.

“We can go about two hundred miles on a tank,” Penny pointed out.  “We’ll have to hit up a couple more at least before we get to where we’re going.”

A few minutes later, in the dim glow of the headlights, a little bridge over a small creek appeared.  There was a dirt trail to the right; Ad drove down the track, finding an unoccupied campsite surrounded by blackberry thickets.

The night was clear and warm.  The fugitives spread a tarp from the trunk of the Ford out on the ground and lay down.

“All right.  Still hurts.  Clean, though.  Doesn’t look like it’s gonna gangrene up or anything,” Penny replied.

Then, exhausted, they slept.

The later morning sun woke Ad.  He shook Penny gently.  “Penny.  Darlin’.  Getting on towards noon, looks like.”

Penny opened her eyes.  “Sure is.”

“Probably oughtn’t move during the day,” Ad pointed out.

“Sure wish this whole thing had turned out different,” Ad said sadly.

“Yeah.”  Ad laid back down on the tarp and took Penny’s hand.  “It was great, being back on one more deal with you.”

They moved out once it was good and dark.  A faint sliver of moon showed in the sky.  Ad steered the Ford back to the dirt road and across the bridge, and about three miles on they saw what they were looking for. 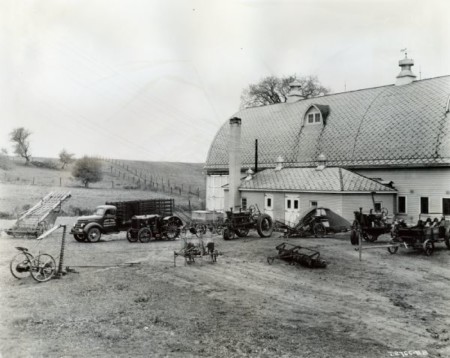 “Look,” Ad said.  It was hard to see in the starlight.  “Big place.  They got ‘lectricity, looks like; there’s a yard light, but the house lights are all out.  Farmers go to sleep early.  Looks like they’re doing well.  I see a tractor set there by the barn.  And a fuel tank!  Good thing the farmer ain’t using a Caterpillar, some of the farms I hear are using ‘em.”

“Why would that be bad?” Penny asked.

“They’re Diesel.  Tractors run on gasoline, like this here car.  OK, here’s what we’ll do.  I’ll idle the car in nice and quiet, next to the fuel tank.  You get out that side and cover me with the shotgun.  I’ll fill the car up.  In fact, let’s get both guns out of the trunk.  I’ll keep that chopper handy, just in case.”

They retrieved the Thompson and the shotgun from the Ford’s trunk and got back in.  Ad put the Ford in low gear and idled up the farm lane, as quietly as he could, up to the gas tank.

Penny got out of the Ford and walked around to the driver’s side of the Ford, shotgun dangling in her good hand.  Ad breathed a sigh of relief; the gas nozzle wasn’t padlocked.  He laid the Thomson on the car’s hood, pulled the nozzle off the hook, and put it in the Ford’s tank.  The gas began to run into the car.

A shout from the house startled them both.  “Hey!  You out there!  What, you stealing my gas?”  The shouter had a thick Scandinavian accent – the farmer.

Penny held up the shotgun, one handed, clumsily, and discharged it in the direction of the house.  A flash from the house gave away the farmer’s location on the porch as he returned Penny’s fire.  Ad heard her go down as he let go of the gas nozzle and grabbed the Thompson.  He aimed at the porch and fired a burst, but another shot from the porch smashed into the gun’s drum magazine, smashing it, and tearing the gun out of his hands.  He saw the farmer, advancing on him now, a lever-action rifle in his hands.

“You son of a bitch,” Ad yelled.  He scooped up Penny’s shotgun off the ground, pointed it at the farmer.

A bullet smashed into his chest.  Somehow, impossibly, he stayed on his feet.  He pulled both the shotgun’s triggers, but Penny had already expended both barrels.

Another bullet smashed into him.  Ad took one more step, wanting somehow to get to the blasting, crashing thing that had killed him,but a third bullet knocked him to the ground.

He fell facing Penny.  In the dim light from the yard, he could see her face, her eyes staring blankly.

“Hell,” he gasped through the blood filling his mouth.  “Never even told you I loved you.”  Then his world went black.

George Johannsen held his .30-30 on the two fallen bodies.  He shouted over his shoulder: “Lena!  You still on the phone with the Sheriff?”

“Yah,” his wife called back.

“Tell them these two, I think they are the ones killed that man over Milwaukee way,” he shouted.  “Tell them, whatever their deal was, it is done now.”

I followed the winding stream

I heard the deafening noise, I felt transient joys

I know they’re not what they seem

In this earthly domain, full of disappointment and pain

I owe my heart to you, and that’s sayin’ it true