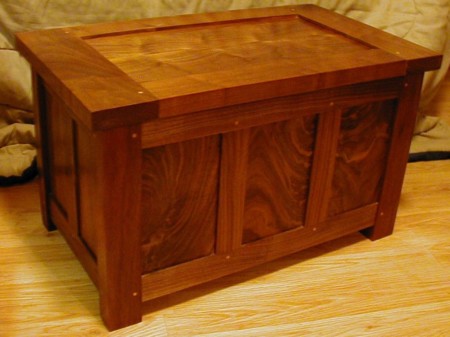 The primary goal for this project was to create a chest in which my wife could store supplies for sewing and weaving projects.

The panel chest first appeared in Europe in the late 14th century and was produced into the 16th century.  The model for my project was an early 16th century chest that comes from the British Isles (see figures 1 & 2 below).  The photographs of the model chest were taken from the website of an antiques dealer that specializes in English and Welsh artifacts.  The dealer dates this particular chest to the time frame from 1500 to 1540. 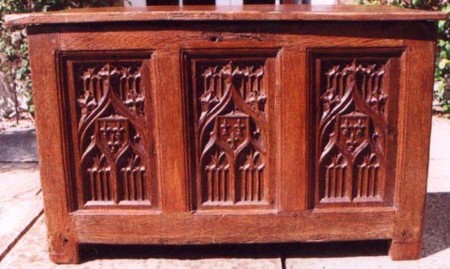 The panel chest marks the appearance of “floating” panels that fit into grooves cut into the framework of the chest.  This technique of building furniture helps to eliminate the cracking and splitting of the wood in the chest due to humidity changes.  The legs, rails, and stiles that make up the frame of the chest are joined with mortise and tenon joints. The pins (wooden dowels) that reinforce the mortise and tenon joints are visible in both the front and side photographs.

In the traditional construction of the panel chest, the panels would be intricately carved.  However, the lid, legs, rails, and stiles would not be carved or otherwise decorated.  In the model chest, the front panels are carved with a complex gothic pattern, while the side panels have a simpler linen-fold pattern. The lid would be constructed from multiple boards and would be edge-glued to achieve the desired width.  An edge joint in the lid is visible in the photograph of the side view of the chest. 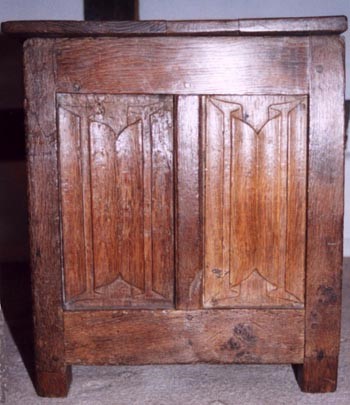 Since this was my first attempt at a project of this complexity, the focus of the project was limited to the construction techniques for the panel chest including the use of mortise and tenon joints as wells as floating panels.  Carving the panels was considered to be too large of a project for the time that I had available.  Since I was not going to attempt any carving, I selected highly figured panels to serve as the decoration for the chest. 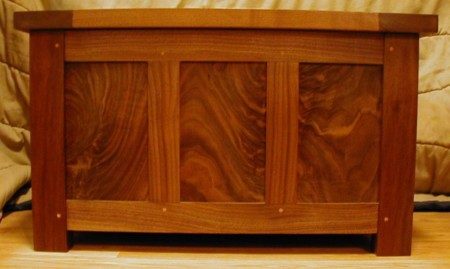 I designed the sewing chest from scratch.  The sewing chest is similar in size and construction to the 16th century model chest, but is not an exact replica of the model.  As with the model, the sewing chest has three panels on the front and back as well as two panels on each side.  The legs, rails, and stiles are joined with mortise and tenon joints that are reinforced with ¼ inch dowels. 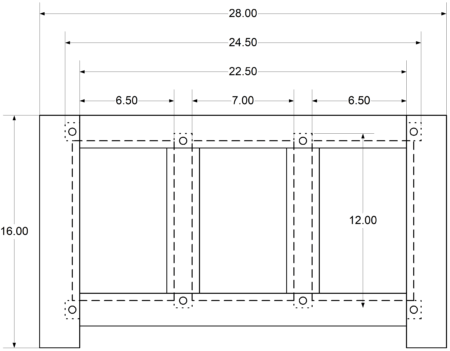 The tools used for the project include a 12-inch planer, a table saw, a compound miter saw, a portable router installed in a router table, a dedicated morticing machine, a random orbital sander, and a hand-held drill.  The panels, legs, rails, and stiles were ripped to rough size and then planed down the finished size.  They were then cut to the final length with the compound miter saw.  All of the ½ inch deep groves in the legs, rails, and stiles were cut using the router table with a ¾ inch straight bit installed in the router.  The tenons were cut on the table saw, and the mortices were cut with the dedicated morticing machine.  All pieces were then sanded with the random orbital sander with a 220-grit sand paper.  Finally, the chest was assembled by gluing the mortice and tenon joints with a modern woodworking glue and the joints were reinforced with ¼ inch oak dowels.

The lid of the project piece is a significant deviation from the traditional construction in that it has a large panel that floats in a set of rails and stiles instead of edge-glued boards.  The panel was constructed from a highly-figured, but thick board.  The board was re-sawn into two thinner boards, book-matched, and edge-glued.  The resulting “look” of the lid compliments the panel construction of the body wonderfully.

The lid is attached with modern cabinet hinges which are mortised into the lid and the body of the chest.  The modern hinges are virtually invisible with the chest is closed.  In the traditional construction, the lid would be attached with strap hinges attached to the back the chest and to the underside of the lid. 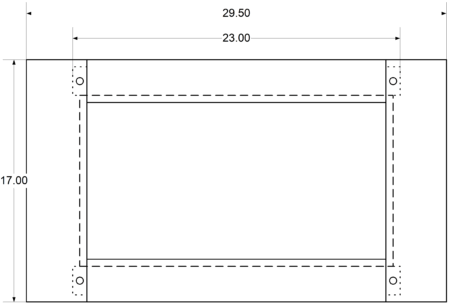 The lid was constructed using the same equipment and techniques as the body of the chest. 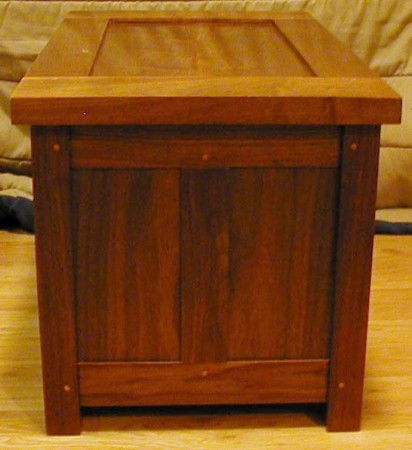 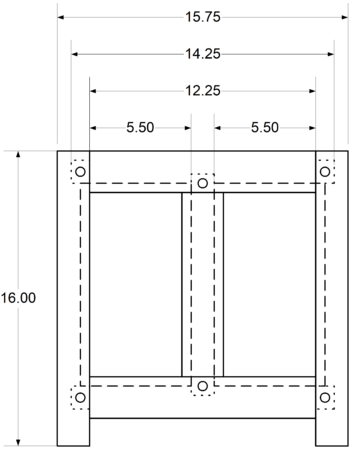 The sewing chest is finished with shellac and wax.  I used a ½-lb cut of shellac and applied the shellac with a rag.  I put on two quick coats of shellac with about a 15-minute wait between coats.  I waited about 2 hours after the second coat to ensure the shellac was thoroughly dry.  Then I sanded the surface lightly with a 400-grit emery paper.  I repeated this process three additional times resulting in a total of eight very thin coats of shellac.  This was enough to provide a nice satin finish.  I then applied two thin coats of Mylands clear furniture wax to protect the shellac and leave the chest with a high-gloss shine. 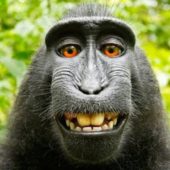