“One thing that surprised me when I joined up,” Caleb Pettigrew said after a pause to moisten his throat with some red wine, “what the rule of anonymat.”  You join under an assumed name, you see?  It’s like your past, your time before the Legion, it doesn’t exist.  Well, I figured, what the hell, my past was pretty messed up anyway.  By the time I talked to LeClaire, I was exhausted, I was hungry, I’d been rained on, snowed on, hailed on, shot at with everything from revolvers to cannon, and I’d marched out at least five pairs of shoes going up and down from South Carolina all the way to Gettysburg and back.”

“So, to join the Legion, you have to pick a new name?”  Philip McGraw sounded like he didn’t much like the idea.

Caleb grinned.  “Well, I’ll tell you.  There was a lot of the War of the Northern Aggression I was happy to leave behind.  But one of our corps commanders, well, if he hadn’t gotten himself killed, he just might have turned things around.  So, I took his name.  For thirty years in the Legion, I called myself Tom Jackson.”

“The very same.  That’s how I joined the Legion.  Coming like I did from the Army of Northern Virginia, after four years of fighting, I didn’t find the training to be too tough.  And I was eating regular and sleeping well.  I sure wasn’t counting on what happened a few years later – 1870, it was.” 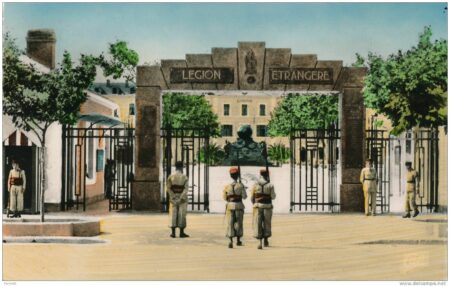 Sunday morning.  Caleb Pettigrew woke slowly.  As was usual in summer, the blistering heat of northern Algeria was already scorching in through the windows of the barracks.  His head hurt; he had begun the evening around a card table with three other legionnaires, the game fortified by several bottles of red wine.  He had ended the evening in the company of a rather talented Italian prostitute in a discreet little brothel in the center of the dusty little Algerian town that was the location of the 117 officers and 2,400 or so men of the Foreign Regiment.

Leastway’s it’s Sunday, Caleb thought to himself.  In the privacy of his own thoughts, he still considered himself Caleb Pettigrew, even as his fellow legionnaires knew him as Tom Jackson.  No training exercises.  No officers or sergeants comin’ in hollering at us.  Guess I’d better get up and find something to eat.  His head was pounding from the cheap, vinegary red wine his friend and fellow legionnaire had scrounged up.  That worthy, a Spaniard who styled himself as Charles Sebastian Diego y Sanchez but whom Caleb simply called Charlie, was snoring away in a nearby bunk.

Caleb sat up.  He picked up his canteen off the floor and sloshed it around; at least half-full.  He removed the cap, drank down the tepid, nasty-tasting water, and then tossed the canteen at the sleeping Spaniard.

Sanchez stirred and muttered a few Spanish obscenities.  His eyes opened, blinking at the morning light.  He looked over at Caleb.

“So does mine.  Blame that shitty wine you came up with.”

Sanchez sighed, resigning himself to being awake.  He rotated himself on the narrow bunk, sat up, placed his long, narrow bare feet on the planked floor.  “Si,” he admitted, “the wine, it was not so good.  But you must admit, amigo, it was better than no wine at all.”

“I’d give my left nut for a bottle of decent sipping whiskey,” Caleb grumped.  Whiskey or any sort didn’t seem to be available anywhere in North Africa, much less decent whiskey.

“You left the game early last night,” Sanchez grinned.  “You go to town, si?  You go to see Marissa again?”

“You know damn well I did.”  Caleb’s appetite for the buxom Italian prostitute was well-known.

“Tomas, you may end up ensnared, if you are not careful.  The Legion, she does not wish us to have entanglements.”

“I’m not getting entangled,” Caleb assured his friend.  “That’s the last thing I need.  Just having a little fun, that’s all.  Marissa’s a girl with some substance, you know?”  He mimed fondling two ample breasts, which made Sanchez grin broadly.  “I like that.  And if the Legion objected to us visiting a whorehouse, do you think they’d let this one keep operating, so close to the base?”

“It could be that you are right,” Sanchez admitted.  “And I have no intent of forgoing visits of my own.”

At that moment a human hurricane burst into the room, and Englishman who bore the unfortunate (to Caleb’s thinking) name of Grant Edward Smythe-Carstairs, and whom Caleb insisted on calling ‘Eddie.’  He was capable of pouring down wine, cognac, brandy, or any other alcoholic beverage endlessly with no ill effect; he was short, scrawny, loud, profane, and insisted repeatedly he came from a wealthy family of “bloody boring Cornwall landowners” and had joined the Legion “as a bit of a lark.”

“Here, you lazy sods,” he proclaimed, producing a canvas satchel.  While he spoke French, as the Legion insisted upon, he necessarily rendered some terms in English – “the Queen’s English,” he loudly insisted at every opportunity. “Some bloody awful rolls from the mess hall.  They had coffee, but I had nothing to carry it in.  You’ll have to go get that yourself.”  He opened the satchel and tossed rolls at his comrades, then took one himself and stuffed it into his mouth.  “You all hear the news?” he asked, masticating noisily.

“What news?” Sanchez asked.  He regarded the roll suspiciously, took a small bite and grimaced.

Caleb’s stomach did a slow roll at the thought of eating.  He set the roll aside.  “Yeah, Eddie,” he said.  “What news?”

“The Army of the Rhine is defeated.  The Prussians rolled right over them, just earlier this month.  The Emperor, good old Napoleon III, he handed over command of the Army to Marshal Bazaine, and they are forming a second army, under the command of Marshal MacMahon.”

“Will we be sent to France?” Sanchez asked.

“No poop on that yet, I’m afraid.”  Smythe-Carstairs sat down on his own bunk, extracted another roll from the satchel, took an enormous bite.

Caleb looked over at the rack of breech-loading Chassepot rifles.  “Legion isn’t allowed to fight in France, right?  As I understand, they can’t send us to Europe.”

“Needs must when the Devil vomits on your pillow, old man,” Smyth-Carstairs pointed out.  “If His Imperial Majesty Napoleon III decides he needs the Foreign Regiment in France, then to France we shall go.”

Caleb couldn’t find a counter to that, so remained silent.

Over the next few weeks, the news from Europe just got worse.  In September, Napoleon III was captured by the Prussians, and Marshal MacMahon surrendered the Army of Châlons to the forces of Feld-Marschall Helmuth von Moltke.

Two days after that news broke, the commander of the Foreign Regiment, Colonel Deplanque, announced that two regiments of the Foreign Legion would be sent to France, to fight for the new Republic.

“Hoo boy,” Caleb Pettigrew muttered when he and his comrades received the news.  It was early evening, after the evening meal, and the three legionnaires were once more relaxing in their barracks.  “Was bad enough having Yankees shoot at me with muzzle-loaders.”  He looked again at the rack of the Chassepot breech-loaders with their long, shining bayonets.  “Gonna be a whole lot more bullets flying now.”

“The Colonel,” Sanchez pointed out, “he said, they are only taking volunteers.”

“Yeah, and you know damn well anyone who stays behind – besides being stuck here with every German in the Legion, as they aren’t taking them – will be branded as yellow, and never be promoted, not if he stays in the Legion until Judgement Day.  No, no man will call me yellow.  I’ll go.  Reckon you will too, right, Charlie?”

Caleb wasn’t familiar with the English term ‘cock-up,’ but the meaning was pretty clear.  “Well,” he said, “I saw plenty of cockups in the War of the Northern Aggression.  I lived through that.  Reckon I can live through this.  You two, follow my lead when it gets thick, you got that?”  The other two nodded; Caleb was the only one among them that had seen actual combat, and he had seen plenty of it.  “Follow my lead, and with a bit of luck, we’ll get back to Sidi Bel Abbès in one piece.”

“And you will get back to Marissa,” Sanchez said slyly.

I was burned out from exhaustion, buried in the hail
Poisoned in the bushes, blown out on the trail
Hunted like a crocodile, ravaged in the corn
“Come in”, She said, “I’ll give you shelter from the storm”