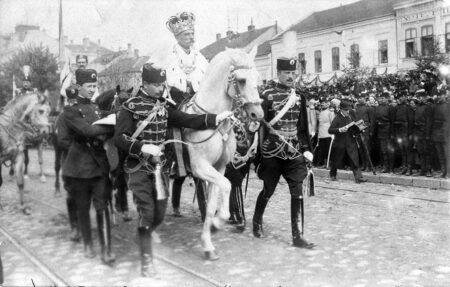 “I didn’t see Eddie again after that.  Two of the guys carried him out, but I heard later that they took his leg off below the knee, so I would think he went back home.  And that lieutenant, Kara George?  Would you believe he was a prince?  Guy was crowned Peter I, King of Serbia, what, eight or nine years ago.  Couldn’t believe it was the same guy when I saw it in the newspaper, but sure as hell, it was him.  Probably won’t hear much more about it – when was the last time you even heard of anything anybody from Serbia ever did, anyway?”

“I couldn’t even tell you where Serbia is,” Philip McGraw replied.

“Out east,” Caleb Pettigrew said helpfully, “south of Austro-Hungary.  Not that anyone but the Serbians much care about Serbia.”

“Probably.  So, what happened after the battle?”

“That,” Caleb said, “well, now, that got right interesting there for a while.  See, losing a war to the Prussians, turns out if wasn’t so hot for old Napoleon III.  And some folks decided they could do better.  Some of those folks were Communards, and they weren’t about to wait to be voted in.  They just tried grabbing with both hands, and the whole city of Paris went up like a tar barrel.  People were screaming for soldiers to come bang heads together.  Next thing you know, we were in Paris.”

Caleb Pettigrew – Sergant Tom Jackson to his fellows – and Caporal Charles Sebastian Diego y Sanchez walked cautiously down the streets of Paris.  Both had their Chassepot rifles loaded.  Caleb had found a knife that would have made Jim Bowie proud, and now he wore it conspicuously on his belt.  He knew his Spaniard compatriot had at least three small blades concealed about his person.  The two men of the Legion walked cautiously, their heads constantly swiveling about.  The Semaine Sanglante – the Bloody Week – had seen the Communard rebellion crushed at last.

The Paris Commune was suppressed, twenty thousand Communards killed and many more captured, at the cost of seven hundred and fifty French regulars and men of the Legion.  But the city was still tense, and nobody was yet quite sure who was in charge.  The men of the Legion walked as cautiously as barefoot men walking through broken glass.

“I wonder when we will be sent back to Sidi Bel Abbès,” the Spaniard mused aloud.

“Who knows?  And why worry about it?  I don’t mind staying in Paris, long as things stay peaceful.”  Caleb had taken a minor wound, no more than a scratch, while storming a Communard barricade.  Sanchez had come through untouched; the Spaniard seemed to live a charmed life.

“I would not mind either, mi amigo, but the law, she is  not changed.  The Legion is not supposed to be in France.  Now that the emergency is over, one wonders when we will be sent home.”

Caleb chewed on that a moment.  “I suppose.”

“Besides,” the Spaniard continued, grinning, “there is always tu dulce niña, yes, my friend?”

Caleb smirked.  He took his right hand off his rifle and mimed fondling an ample breast.  “Well, sure, Charlie, there is that.  And it’s not like you’ve never been to that house your own self.”

“Si, but I prefer variety.  You, it is always Marissa.”

“If you have a horse, you ride it.”  Caleb grimaced a little at the inaptness of the comparison.  Marissa was many things, but horse-like was not one of them.

When the two legionnaires finished their patrol, they arrived back in the temporary camp on the outskirts of the city to find their fellows buzzing with the news:  “Back to Algeria,” was the word.  Within the week, the Legion took ship at Marseille, bound for Oran.

“We will have to march from Oran to Sidi Bel Abbès,” Caleb’s Spanish friend observed as they filed onto a rather battered old two-master.

“Count on it,” Caleb replied.  “What the hell.  Have to be alive to march.  Plenty of men are dead.”

“Si.”  Sanchez shook his head sadly.  “And the people of France, they are angry.  Angry at the Prussians and Bavarians for parading through Paris.  They will want revenge on the Germans, my friend, you wait and see – we may be done fighting them now, but we are not done fighting them for good.”

“You forgot one other thing the people of France are angry at,” Caleb said.

“They’re angry at us.  The French regulars, the Zouaves, the Legion, all of us who fought and lost.  Heard plenty of that when I was walking from Appomattox to Norfolk.  Folks don’t like being whipped.  And just you watch, they’ll blame us for it.”

“Maybe.  Maybe not.  Napoleon III is gone, removed from his throne.  France is a Republic now.  Maybe things will be different.”

When the ship finally got under way, Caleb remained on deck, leaning on the railing, listening to the shouts of the sailors as they scrambled up the masts and made sail, and enjoying the calm Mediterranean winds and the clear blue Mediterranean sky.  He remembered his own brief stint as a sailor.  Never really did get the hang of it, he reminded himself.  Guess I’m better at soldiering.

The passage to Oran was uneventful.  The ship docked safely, and the men of the Legion dismounted and formed ranks, under the direction of the surviving officers.  Caleb took his place at the head of one of the ranks, due to his new status as Sergant, and was surprised to see a round-faced man in the robes of a priest sitting on a spavined old horse at the head of the column of legionnaires.

“This,” bellowed a leather-lunged Sergant-Major, “…is the Bishop of Oran, His Excellency Jean-Baptiste-Irénée Callot.  He will be accompanying us to Sidi Bel Abbès and will be holding holy services morning and evening along the way, for those of you miscreant souls whose confessions have not been heard in some time, as I suspect is the case for most of you.  Attend!  We will march as soon as all are in formation.”

“Don’t matter none to me,” Caleb muttered, slipping into South Carolina English.  “Raised a Baptist my own self.  Damned old monkey in fancy robes ain’t got nothing for me.  Reckon it’s the Old Place Down Below for me no matter what happens.”

The legionnaire next to him glanced over.  He spoke softly in French:  “Sergant, you do not listen to the Bishop?”

The Legion took their time marching home again – three days to cover eighty kilometers, through some rough, dusty country.  Caleb, in his mind, translated the distance to fifty miles, musing to  himself, we’d have gone a lot farther and a lot faster if old Stonewall was cracking the whip.

It was a hot, bright late July afternoon when they arrived at the Legion cantonment in Sidi Bel Abbès.  A tall, scrawny, cadaverous Adjutant with a patch over one eye appeared in front of them.  He extracted, of all things, a bugle, and blew a sharp three-note welcome.

Caleb chuckled.  He wasn’t the only one.

“Men of the Legion!” the walking cadaver shouted.  “Stow your belongings.  The refectory remains open until you have all been fed, but do not dally.  Welcome home, legionnaires!”

“Welcome home,” Caleb muttered.  “Hurry up and get yourself fed, or else go hungry until morning.”  He went looking for his Spanish friend and found him, in front of the barracks that they would be re-occupying.

“Mi amigo”, Sanchez said, “I am devastated that we will no longer be in the same bay.”

“Oh.  Right.”  As a result of his promotion, Caleb would be moved into the non-commissioned officer’s rooms at the end of one of the barracks.

“We can still be amigos, yes?”

“Don’t see why not.  You figure on heading into town after we eat?”

“Si.  Like before we go to France, yes?  You will be anxious to see Marissa.”

“I suppose.”  Caleb remembered the Italian girl; her ample bosom, her narrow waist, her full lips, her white teeth – and her penchant for biting in the heat of the moment.  “Yeah.  I suppose I am.”

And the deputy walks on hard nails, preacher rides a mount
Nothing really matters much, doom alone that counts
And the one-eyed undertaker, he blows a futile horn
“Come in”, She said, “I’ll give you shelter from the storm”