I watch hoarders programs because they make me feel good about my shoddy housekeeping. (Well, really, I have much better things to do than housework.) But it makes me feel superior because I’m not like them.

More often than not, the impetus for a hoarder to clean up is code enforcement agencies. They find out through EMS (who can’t get through the hoard to the patient) or neighbors (who have to look at it and/or smell it and/or deal with the vermin such hoards attract and the attendant lowering of property values) or loved ones (who are concerned and/or pissed off). Sometimes children are involved. Sometimes animals are victims of the hoard. (For the purposes of this article, I will not address DFS or animal control involvement.)

Enter the need for redress and resolution, if not recompense, and following that need, code enforcement.

Like the EPA’s existence, I can see why code enforcement would be a necessary evil to some extent. But the more I watched, I increasingly wondered how Libertopia would deal with the problem of one person imposing his problem on neighbors and/or loved ones.

I asked this on the zooms with Hyperbole, westernsloper, and MikeS. MikeS made the point that if I, a neighbor having to look at/smell/exterminate vermin caused by someone using their property as they see fit, act by calling code enforcement after direct requests to clean up have failed, I am imposing my will upon someone else to do what I want them to do. 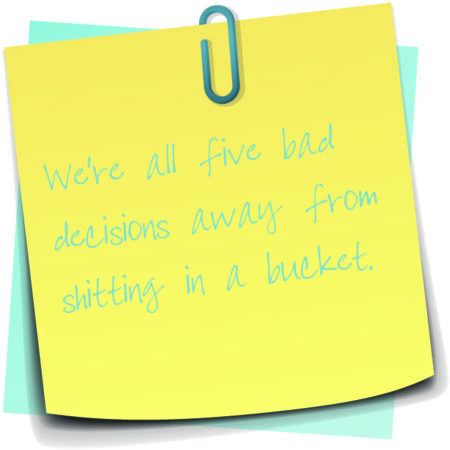 But the neighbor has already imposed his will upon me and I can’t do anything but submit.

Let us put aside a nature-versus-nurture discussion of the concept of free will because that’s a rabbit hole I haven’t been able to dig myself out of yet. However, what I do want to explore is what happens when your will is imposed upon by someone else to your detriment. It happens all the time. A car accident where you’re not at fault. A high-maintenance family member. A health scare that turns real. A family who moves in next door to you and junks up their property, bringing the whole neighborhood’s property values down.

None of these are things predicated on decisions you made, acts you committed. You cannot act. You are forced to react, which is not the power position, and so you feel powerless to change the situation.

Let’s take the case of the new neighbor. It takes a while to junk up the property, but there are signs that it’s going to get worse and it’s not going to get better. You either talk to the neighbor or you call your HOA president, if there is one. The neighbors either don’t answer their door, give you a line, or get nasty, or the HOA sends a notice.

Now here’s the rub: They ignore you. They ignore the HOA. They have nothing to lose because there are no real consequences. When you get right down to it, an HOA has no teeth. You, personally, are powerless to stop this impending hoard that will eventually bring with it stink and filth and vermin that will leach over into your property. Once the wiring gets eaten by rodents all it will take to set it (and possibly you) ablaze is a spark and a piece of paper too close to an outlet and the chance of fire is greater if they smoke. The value of every house in your neighborhood has tanked, especially yours, and even if you wanted to sell to get away from the neighbor, you’d take a bath. Everyone on the block is affected and not one of you can do anything about it.

HI. I’M FROM THE GOVERNMENT AND I’M HERE TO HELP.

Code enforcement can do something, but will they? And how long will it take?

Almost no one in this scenario has a TV producer to call and magically Matt Paxton will show up to dish out basic wisdom (“We’re all 5 bad decisions away from shitting in a bucket.”) while he shovels out a hoarder house and grounds and the hoarder is picking through urine- and feces-encrusted hand-knit baby blankets lovingly made for people who are now 43 years old.

In reality, the neighbor is not only unwilling to clean out his hoard, but he is likely unable to. 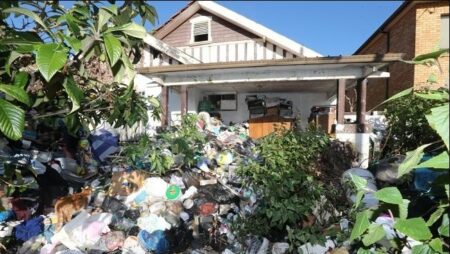 And then a hoarder who is not particularly interested in participating in voluntarism moves in next door to you. After all, we aren’t keeping people out. Before you know it, you’ve got roaches in your house. Sure, they signed the rules, but they simply don’t care. You can get the courts involved, but again, they ignore the judgment. Maybe you send collections after them.  They dodge the dunning.

Now you’re in a blinding rage because your will is being encroached upon by someone else and you are powerless.

My contention, that lovely night on the zooms, is that the logical conclusion of these two competing free wills, sans some governing/intervening body, sans some reasonable recourse and redress, is that somebody’s gonna get shot.