Gomp awoke on the third morning after his rescue to find Faye had evidently gotten up, dressed, and quietly left.

He sat up and looked around the tiny, cheap flop she had rented, paying cash, so they could “lay low” for a few days.  Emphasis on the ‘lay’ part, Gomp thought wryly.

There was folded piece of paper on the tiny, cheap table next to the bed.  He picked it up, unfolded it and was not surprised to see Faye’s neat handwriting.

Gomp, it began in an unflatteringly brief preamble – even in the heat of passion Faye had always referred to Gomp by his last name.  He read on.

I reached out to that data-cruncher I told you about.  No reply, but a ‘mutual friend’ told me Francoise is either on Earth or Mars right now, presumably up to no good, as usual.  Anyway, it doesn’t look like she’ll be able to help you crack Taliaferro’s computer system.

Sorry, but looks like you’ll have to find some other way out.  I’ve got a lead on another bounty, one I’ve been chasing a while now, so I’m off to the Skyhook to catch the zero-seven shuttle to the Princess Caroline that’s warping to New Albion this morning.

I’ll give you a call next time I’m in Mountain View.  If you’re still there.

“Great.”  He tossed the note on the floor and lay back down.  “Now how am I going to skin this cat?”

He remembered, suddenly, the night before.  They had been lying in bed, both birth-naked, both rather drunk, and Gomp had been telling Faye stories of the war.

“So, no shit, there I was,” he had said, “and the captains of the other two privateers we had met up with come walking into our ship’s Wardroom.  The captain of the Cape Fear, I don’t remember his name, he was nothing special.  The other guy, though, captained the Red Witch.  Hess, his name was.  What a creepy fucker!  Tall, skinny, looked like he was a hundred years old.  Yellow eyes, pointy yellow teeth, hands like claws.  He was wearing this crappy old Navy pea-coat, looked like he got it out of a salvage bin.”

“Of course,” Faye had said with a burp.  “Prob’ly catches people off guard.  Shows ‘em what he wants them to think of him.  Not what he really is.”

He got up, dressed quickly, and left the flop.

The better part of the day, several purchases, a few key conversations, and some setup work done, Gomp boldly walked up to the front of the big building where Bolivar Taliaferro had her ‘offices.’  Walking in the main door, he approached what was clearly a reception desk, occupied – unusually – by an actual human rather than a reception droid.  The receptionist was decorative but clearly alert and intelligent.  Her eyes swept over Gomp as he approached the desk, grinning, certain that there were weapons trained on him at that very moment.  He stopped in front of the desk, his small personal ‘pad in one hand. 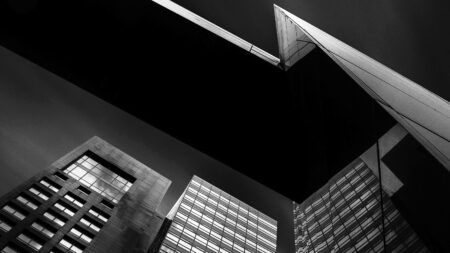 “I’m not armed,” he told the girl.  “My name is Hector Gomp, late of the privateer starship Shade Tree.  I’m here to see Miss Taliaferro.  It is Miss Taliaferro, right?”

“Wait, please.”  The girl tapped on the laser-keyboard on her desk.  She inclined her head for a moment, listening to something; Gomp presumed that she, like many people, had a temporal cone speaker-implant.  He had one himself.

“Have a seat,” the girl said after a moment.  She indicated a small couch a couple of meters away.  “Miss Taliaferro will be down in a few minutes.”

“Thanks.”  Gomp walked over and sat down.  As he sat, he did a mental inventory:  Three guys watching me.  One on that mezzanine up above.  One peeking in from that hallway behind the reception desk.  And the one guy that just walked up and posted outside the main door.  No long weapons, probably just sidearms.

Gomp sat, patiently waited.  He set his ‘pad on one knee and twiddled his thumbs for a bit.  He looked up at the girl, caught her watching him.  He grinned at her.  She looked hurriedly away.  Gomp toyed with the idea of waving to his not-very-well-hidden minders but decided against it.

After approximately ten minutes, an unseen lift door opened, and Bolivar Taliaferro walked out.  Gomp wondered if she had dressed for him; she was wearing a rather severe and yet flattering black business suit, with a slim black sheathe-skirt and what Gomp’s father would have referred to as “fuck-me pumps.”

“Well,” Taliaferro said, walking up and extending her hand.  “This is certainly a surprise.”

Everything is going to go in the next couple of minutes, Gomp reminded himself.  Either I’ll be shed of this, or I’ll be dead.

Taliaferro indicated the couch, and they sat down, facing each other.  “So, what can I do for you?  Have you decided to come work for me?”

“Not so much.  I wanted to tell you something about me, something you need to know.”

“Oh really?  And I suppose this something will involve me lifting the hit on you?”

Taliaferro nodded.  Gomp tapped a prompt, then turned the ‘pad around so Taliaferro could see the screen.  There was an image:  Gomp, surrounded by a group of about ten very large, very muscular men, much of a type with Gomp himself, in front of the very building they were in.

“You know a lot about me,” Gomp said, casting his first die.  “You know I was a Marine.  We took this photo a couple of hours ago.  Guess your people weren’t watching out front, but I’m sure you have your own security cams, you can verify it’s real.  These are the other members of my old Marine Special Assault Team, the ones that are right here in Mountain View.”  Gomp watched her carefully; there was a risk here, as in the Confederate Marine Corp there was no such thing as a ‘Special Assault Team.’

Taliaferro extracted a small, slim ‘pad of her own from her jacket pocket, tapped it.  “OK.  You were there, all right.  Why should I care?”

“Because they’re still out there,” Gomp replied, casting his second die.  He lifted the pad.  “OK, boys,” he said into it.

Ten laser beams lanced into the reception area, some from the building across the street, some from adjacent rooftops.  They traced slowly around the area, scanning for targets.

Taliaferro glared at Gomp.  She frowned.  Then, suddenly, she laughed.

“You have no idea,” Gomp replied.  He wasn’t grinning anymore.

“What the hell,” Taliaferro said.  “Henderson wasn’t all that swift anyway, letting himself get tagged with a bounty.  Someone would have got him sooner or later.  And you’re a hard one, Mr. Gomp.  I can respect that.  Fine, then.  You’ve got it.  I’ll lift the hit.”  She lifted her ‘pad, tapped on it for a moment.  “The word’s gone out.”

Gomp stood up.  “Good.  I’ll be on my way then.  Been a pleasure doing business with you.”

Taliaferro stood up as well.  She nodded, turned to walk away, then stopped.  She looked over her shoulder.  “Are you sure you don’t want to come work for me?  I could use a man of your… skills.”

“I’m sure.  I’ve done some shady shit in my day, but there are some lines I won’t cross.  You’re on the other side of a bunch of ‘em.  Still, though…”  He stepped forward, smiled, and patted Taliaferro on her shapely backside.  “I wouldn’t be above getting together purely… socially.”

“Maybe.  Someday.  If you’re lucky enough.  And if I’m bored enough.  Good evening, Mr. Gomp.”  She walked away, got back in the lift.  The door slid shut.

Gomp winked at the receptionist.  The three watchers were gone.  He walked out into the evening street.  Well, this feels like it rates a celebration.  Maybe I’ll get round a few beers, get me into a card game, maybe even find a girl.  He walked off down the street, whistling cheerfully.

Back in the building, Bolivar Taliaferro rode the lift to the top floor, to her personal quarters.  Her chief advisor was waiting for her there.

“Boss,” he said.  “Are you sure about this?  Lifting the hit on him on that flimsy act?”

Taliaferro smiled.  “Yeah, why not?  You should have seen the image of his ‘team.’  At least four of them were meatheads from that gym up the street.  I’ve seen them around.  He probably gave ’em twenty bucks each to come pose.  And those lasers?  I’ll bet money they’re light-show toys.  He probably wired them to actuators with a datalink tap.  Probably spent half the afternoon setting them up.  Clearly the guy doesn’t give even one single fuck.”

She shrugged.  “Like I said.  He’s got balls.  But here’s the thing:  Guy like him, bad luck just follows him around.  Sooner or later, times will get tough.  Sooner or later, he’s going to walk back in here looking for a job.  And when that happens, I want him to be healthy and tough.”

A few blocks away, a dive bar Gomp hadn’t seen before beckoned.  He went inside, sat at the bar, called for a beer, then sat, sipping meditatively.

That was actually fun, he realized.  Not sure why the hell I patted her on the ass.  Not my type at all.  Just wanted to get away with it, I guess.  What if I hadn’t?

He frowned into his beer mug.  That could have ended up really bad.  I could be dead right now.  Would be if she hadn’t bought the bit about the fake team.  Don’t know why, but I’m still having a hard time giving a shit.  Ever since the ship got destroyed.  Ever since I almost died.  Everything changed.

He pulled out his ‘pad.  He scrolled through the contact list.  There it was, the name he was looking for, next to the ‘call’ prompt:  “Captain Jean Barrett.”

Gomp frowned.  No.  Not now.  He dismissed the contact list, pocketed his ‘pad, and turned his attention back to his beer.

I hurt easy, I just don’t show it

You can hurt someone and not even know it

The next sixty seconds could be like an eternity

Mr. Jinx and Miss Lucy, they jumped in the lake

I’m not that eager to make a mistake

People are crazy and times are strange

I’m locked in tight, I’m out of range

I used to care, but things have changed