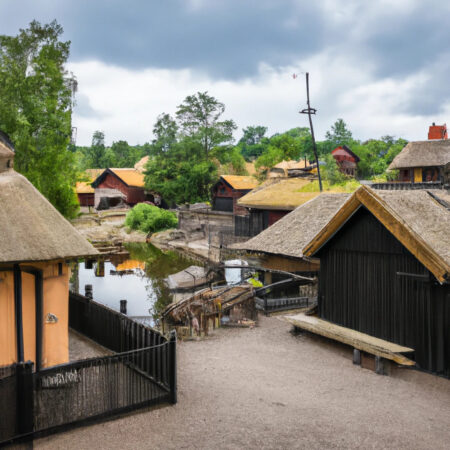 Hengist was gone when Mabinne awoke; he had a way of arising, dressing, and slipping out without disturbing her.  She dressed quickly, donning the heavy blue dress, and wrapping a warm shawl about her neck and shoulders.  She found the purse of coin and left the inn, walking east on the crowded street.  The shopping area was an Hengist described; vendors of clothing, jewelry and other luxury goods shouted and haggled all about.  But Mabinne was looking for something in particular.

After a half-hour of exploring, she found what she was seeking.  Mabinne was glad to see that the practice for identifying a magic shop was the same in Ikslund as in Beretan; a simple placard on the door bearing a distinctive pattern of waving lines.  She hesitated for a moment, then shook her head and went inside.

A small chime jangled as the door closed behind her.  From behind a curtain came a woman, clearly an Ashlander, short, swarthy, and smiling.  “Hello, my dear,” she said.  Then she looked closer at Mabinne, and her expression grew guarded and her accent more pronounced.  “Beretanian, then, are ye?”  It wasn’t the first time in the trading village that someone had looked at Mabinne with suspicion.

“I am Beretanian,” Mabinne assured the woman, “My name is Mabinne.  But I live here now, in Ikslund, with a man of Ikslund, on a homestead north of the hills.”

“As you say,” the Ashlander said.  “I suppose you would hardly be here otherwise, after all that happened…  Well, never mind.  I am Duress.  What can I do for you?”

Mabinne moved closer to the store’s small counter.  She unwrapped the shawl she wore about her neck to reveal the binding collar.  “Can you remove this?”

Duress leaned forward and examined the collar.  “No,” she said.  “In the first place, it’s strictly against guild rules.  I presume whoever put that on you – your Ikslunder man, perhaps?  Then he had good reason to do so, and I won’t interfere.  In the second place, even if I wanted to, I couldn’t.  It’s keyed to the user, and no one else can remove it.  Only he can do that, and love, if he dies, it stays on you until you die.”

“I thought as much,” Mabinne said.  “He may remove it, one day…  In the meantime, may I look at your wares?”

Duress nodded.  She extracted a long Ashlander pipe from a robe pocket, stuffed some foul-smelling weed in it, lit it and proceeded to puff out clouds of smoke.

Mabinne presumed the smoke was intended to make the air unpleasant and so to cause her to leave faster, but she ignored it.  Most of the shop’s content was typical, herbs, potions, poultices.  But in one basket…

“What are these?”  Mabinne picked up a small black crystal on a silver chain.  In the basket lay another identical crystal and chain.  They were like nothing Mabinne had seen before, black with a hint of purple, about as long as her middle finger.

“Soul crystals,” Duress said.  “They can greatly amplify a magic-user’s power for a brief time.  Using them destroys them, but the results can be impressive.  Mind you, they don’t contain a person’s soul; that’s just a story to scare children.  But they do work.  But love, your magic is useless to you while you wear that collar.  Amplifying nothing still gives you nothing.”

“Six gold each.  Eleven gets you both.”

Mabinne picked up the other gem.  “Will you sell them to me?”

Duress looked at her, exhaling another cloud of thick smoke.  “Why not?  Few magic-users about, and the Ikslunder magic users consider those naught but Ashlander superstition.  Stupid.  I suppose you can’t use them, so what’s the harm?”

“I’ll give you seven for both.”

“If you’re no fool, then why did you already admit to me that no one hereabouts is interested in these?  Eight.”

Mabinne handed over the coins and tucked the gems into her pouch.  She’d tell Hengist they were jewelry.  And, as long as she wore the collar, that’s all they would be.

She went back out into the chilly morning.  She bought a few heavy shawls, a warm fur hood for Hengist, and made her way back to the inn to find Hengist seated in the main hall, swilling an ale, and telling Bjorn a story of a bear hunt in the mountains.

“Ah, my sweet,” he greeted Mabinne.  “I have what you asked – Ashlander yeast, five sacks of wheat, two of barley, salt and spices.  We’ll eat well this winter, eh?”

“We will.  Here,” she said, handing Hengist the fur hood.  “I know the winters here are cold.  It’s important to keep your head covered.”

Hengist looked from her to the hood, then back; he broke out in a grin.  “I thank you, sweet,” he breathed.  Clearly a gift was the last thing he expected.

And honestly, Mabinne mused, I’m not sure…  I don’t know why, but his pleasure… pleases me.

The next morning, wagon loaded, they set off for home.

The autumn brought cooler weather during the day, and downright cold weather at night; Mabinne grew to appreciate the several large hearths in the house, even if feeding them required her to help Hengist in cutting, splitting, and stacking wood.  For a few days Gerd came over to help.  Hengist quietly explained that Gerd couldn’t handle an axe, but that he was good at carrying the split wood to the overhanging shed attached to the house and stacking it within.

Then Gerd had to go back to help his parents with harvesting, and Mabinne was left to carry wood, as Hengist chopped and split.  He seemed to relish the task, whirling the axe expertly around his head, and working bare-chested even in the chill autumn air.

On one particularly bright, sunny day, Mabinne took note of the several ugly scars that Hengist’s back and chest were adorned with.  He had never mentioned being injured, but surely the life of a raider was a hard one – and several of those blows must have come close to killing him.

And where would I be, she wondered, if one of them had?  Back in Beretan, certainly.

The thought came as something of a surprise, but not as surprising as realizing she hadn’t thought of Beretan or her dead husband in some time.

Am I actually coming to accept this life?  Hengist may have taken her in a raid, may have raped her in her own house and ordered the murder of her husband – but here, in this place, he treated her with deference, even kindness.  He had encouraged her to order his house, kitchen and furnishings as best suited her, and hurried to carry out her wishes in the slightest regard where those things were concerned.  She had noted another thing; over the weeks he had stopped referring to the place as “my house,” and instead as “our house.”

He was good to his family, going out of his way to accommodate a nephew who clearly was damaged in some way.

And at night, in the bed, he strove to be gentle and considerate, even tender.

It was a perplexing contradiction, the two sides to this man; Mabinne wondered if she’d ever understand it.

Meanwhile, there was wood to be carried.  Hengist had stopped chopping for a moment and was watching her.  She picked up several chunks of cordwood, more than she had been carrying.  Then she tried for one more; with her load balanced, she straightened up, took a step – and stumbled over a rough patch of earth, spilling the wood onto the ground.

Hengist let out a shout of laughter.  “Careful, sweet,” he chided her.  “Ambition suits you, but if you try to carry all this at once, we’ll be out here into the night.”

Then, for the first time, she smiled at him.  Hengist’s face broke out in a huge grin.