A Glibertarians Exclusive – The River II

A Glibertarians Exclusive – The River II 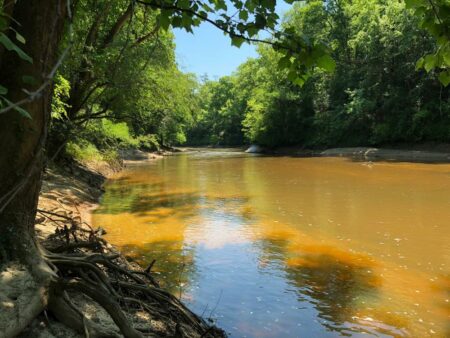 James Davidson grunted in the affirmative.

“Y’all ain’t used that fishing rod much,” Ty pointed out.

Ty and James were once more ensconced in their lawn chairs on the sand bar overlooking the Conecuh River.  They once more had a bottle of whiskey, this time Jack Daniels.  “No sense drinkin’ cheap whiskey today,” James had pointed out, “when this here’s the last Saturday ever.”

James looked down at the fishing rod and tackle box laying in the sand next to his chair.  “Thought about it,” he shrugged, “but just don’t see the point, you know?  Botherin’ the fish and all.  It’s their last few days too, after all.”

“S’pose it is.”  Ty took another small drink of bourbon.  He extracted his phone from a shirt pocket and looked at it for a moment.  “Guess there’s bad things goin’ on in the cities.  Even up to Birmingham.  People just gone nuts.  Looting, burning and the like.”

“Idiots,” James snorted.  “What good’s all that gonna do?  Stealin’ televisions and all that.  In two days y’all jus’ gonna get wiped out.”

“Some folks,” Ty observed, “jus’ gotta be stupid.  City folks, mostly.  Hell, you was up in Birmingham your own self for what, a year?”

“Yup.  Janitor at the University up there.  Guess cleanin’ toilets is in m’ nature.”  Halfway down the bourbon bottle, James was beginning to slur his speech.  “Had me a girl, too.  Thought a couple times about goin’ back.  Reckon she’s got a new fella, though.”

“Ever thought about goin’ back?”

“No, stupid,” Ty reached over and punched his friend’s shoulder.  “Before all this.  Getcha a better job.  Find a new gal.  Sure ain’t many unattached gals ‘round here.”

James frowned.  “Oh, hell, I thought about it.  My gal Sally, well, she was somethin’ else.  If I coulda patched things up with her, well, then I’d be jus’ a-flyin’ back up to Birmingham.”

“Maybe you oughtta call her.”

“Why?”  James took another hit off the bourbon bottle.  “Even if she don’ have a new fella now, what for?  Things are goin’ straight to hell up in the city.  I got no hankerin’ to go up there now.”

“Maybe you should call her, ask her if she wants to come down here.”

“Didn’ think of that,” James admitted.

“Can’t,” James said.  He took another hit of bourbon and handed Ty the bottle.  “Phone’s dead.  I haven’t charged it since… well, not since we got the news.  Of the meteor and all.  Jus’ don’ see the point.”

“Ain’t there nobody you’d want to talk to?”

“Who?  Sally, she dumped me, remember?  My folks are dead.  My sister, she moved out to Californey, decided she had got too high-falutin’ for the likes of her old dumbass redneck Alabama brother, she ain’t returned my calls in two years.”

“Is what it is,” James grumped.

“I reckon.”  Ty looked thoughtful.  “Look here.  Mama’s cookin’ up a big spread tomorrow for dinner.  Figures no use leavin’ anything in the freezer, nor the pantry.  Why’nt you come on over, eat with me and the family?  Mama’d be glad to have you.”

“Might could,” James allowed.  “Yeah, I jus’ might well could.  Long as she don’ pester me not comin’ to church these last few years.”

“She will,” Ty predicted.  “But don’ let that bother ya.  She reckons us all to be sinners, anyway.  If’n you ain’t come to Jesus yet with all this goin’ on, don’t figger she’s gonna spend too much time lecturin’ ya.”

James nodded.  He took the bourbon bottle back, took another hit.  His lips were tingling, his head fuzzy.  Probably have a hangover in th’ morning, he told himself.  He had suffered a hangover every morning since the word of the World-Killer had hit the news, so that was nothing new.

Damn it all, why’d Sally have to go and dump me?  She was just the sweetest thing.  Sure, I drink some, but it ain’t like I was ever a mean drunk or nothin’.  I always treated her good.  Never missed a day’s work.  Had a decent place to live.  Was savin’ money.  A couple more years and I’d-a been able to buy a house up there.  We coulda… Well, we coulda…

He frowned again and took another hit of bourbon.

A sudden swirl in the brown water of the river swept up in front of the two friends.

Well, James thought, Could be worse ways to meet the end of the world.  I’ll settle for my lawn chair, my old buddy, a bottle of good hooch and a good old river to watch.

He took another hit from the bourbon bottle, handed it to Ty, and relaxed.

Wish I was back in the city

Instead of this old bank of sand

With the sun beating down over the chimney tops

And the one I love so close at hand

If I had wings and I could fly

I know where I would go

And watch the river flow