The Hat and The Hair Extended Universe: Hillary, The Becoming: Episode 21

“I just don’t know what to do, Grandmother,” Hillary said, kneeling painfully before the crone on the dais.

“Lose not thy hope, Daughter,” came the reedy, thin voice, like the rubbing of insect wings. The widow’s hump on the crone’s back had forced her head almost down to her chest and she could barely open her eyes.

“My failure has put a rapist on the Supreme Court,” Hillary wailed. 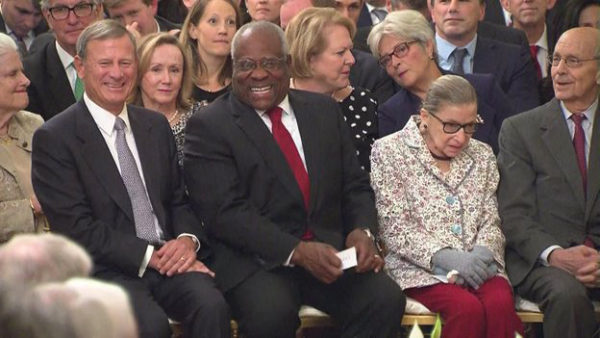 “A rapist on the Supreme Court,” the assembled women of the crowd echoed, pussy hats pulled low to cover their faces.

“I don’t know how he could have beat me,” she said, thumping the hollow between her diseased teats. “Me. Hillary Clinton. The most qualified and the most ethical and the smartest person ever to run for President…”

Somewhere behind her, a couple of bepussyhatted figures snickered. One way in the back might have even chortled. She whipped her head around to glare, a blue light rising in her eyes, and the crowd fell into a fidgety silence.

The crone lifted a thin arm, eyes burning with ancient hate. “The fool has great powers on his side,” the crone rasped. “The hat. The hair. These creatures work against us, offal from sidereal hells unknown.” She closed her eyes and lowered her arm. “But we too have powers, gods of the Elder Races that ruled this Earth when we mammals still scurried between the strides of titanic beasts, their cyclopean cities rising from fetid swamps.”

“O’ mighty they were, the Fe’tyrol and the D!ga!” She reached out and stroked the huge misshapen skull on a pedestal beside her, the fangs yellowed and the eye-pits stained red with the blood of a thousand thousand maidens.

“The Fe’tyrol!” the women said, their voices rolling out over the blasted plain where they stood, lit by the sickly orange light of a dying sun hanging sullen in the sky.

“The D!ga!” they said, the glottal stop clicking like the cocking of a hundred guns.

“Stop that!” Hillary yelled. “This is a holy event, not a fucking Rihanna concert!”

The crone waved and the cellphones crumbled to noxious dust.
“Kavanaugh,’ she croaked when the crying settled.

“Yes, Grandmother,” Hillary said. “Let me be the instrument of your divine will. I will kill him.”

“No,” the old woman said. “He is too powerful. Powerful magics protect him or else the accusations would have been enough. He has some phallus talisman or totem of the dingus, and it is by the dingus he must be betrayed. I am close to him now. It must be me.”

The crone stood painfully and pulled off her sacred vestments, letting the SUPER DIVA! sweatshirt fall to the ground. Grooved and fissured, the twisted labial extrusia of her flesh quaked as she raised her arms and thrust the tomb of her vagina toward the women.

“I SHALL SEDUCE HIM!” she said, her voice the thunder of the lightning she summoned.