Warty Hugeman and the Sensitive Vampires 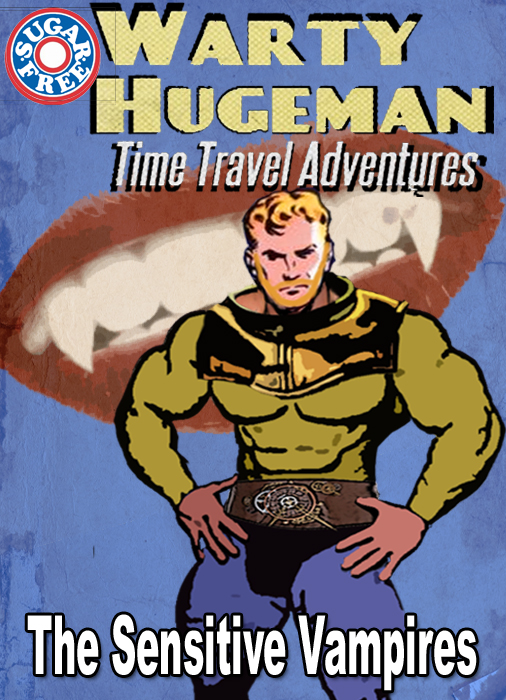 “I will destroy you all, vampire scum!” Warty growled at the feeding horde of bloodthirsty undead. They had killed the entire population of a small town and their bodies lay all around them, drained and pale, contorted in pain, or just torn to pieces. The town itself was burning in the distance behind them.

“Whoa, whoa, there’s no need to be hasty, friend,” the vampire in front said, lisping around his extended fangs.

“Look at this stake,” Warty said, raising a gnarled spike of gray and black wood. “I carved it from the last tree that will ever live. I’m going to shove it into your dead hearts and scrape them from your chests.”

“Wow. Such violent language,” a blonde vampire in back of the horde of undead said.

“Is that really necessary?” said a stately vampire dressed in rotted silk and lace.

“I’m very uncomfortable right now,” a child vampire said, the lower part of her face caked with gore. In her hand was the forearm of an infant that she took occasional sucks off of like a lollipop. “I just don’t think you are making this a safe space for expression.”

“You are murderers. You’ve drained this town dry,” Warty said. He kicked the nearest vampire in the crotch and his pelvis snapped audibly. Warty plunged the stake into the creature’s chest and he exploded into flame and ash, his disarticulated skeleton clattering to the ground.

“Human supremacist,” one of the bloodsuckers hissed.

Warty backhanded him and his blood-stained fangs went flying out of his mouth.

“I’m going to cleanse this town of your kind,” Warty said, staking the toothless hippie.

“Fascist,” the little girl vampire hissed. The word got repeated, passed around like a joint; soon the entire crowd was high on it.

“I am not a fascist,” Warty said. “You are predators. Killers. Murderers.”

“We have a disease, man,” the silk-draped vampire said.

“An addiction. Gripped in the throes of addiction,” the child vampire said.

“We didn’t ask to be this way,” said a vampire in pantaloons and blouse, advancing on Warty. “We’re the real victims here.”

Warty shoved the vampire to the ground and they all backed away.

“Typical Neanderthal,” a tall blonde said. Her eyes were icy blue chips. “The only language he speaks is violence.”

A short female Hispanic vampire held up her hand. “Uh, Desomelda, I feel that as the only queer undead-of-color present, I should lead the re-education efforts of this huminated individual.”

The blonde’s haughty demeanor fell away. “Of course, Yara,” she said and melted into the back of the crowd.

“Your fatphobia has been noted,” Yara sneered back and many in the crowd smiled with confirmed bias.

Warty held up his stake. “If I get you with this, will it be the ash and flame gag, or will you just pop like a blood balloon?”

“That tone is very hurtful,” the child vampire said, her youthful face betrayed by her ancient, flat eyes.

“We know who you are, Warty Hugeman,” Yara said. She used fingers that dripped with blood to put air quotes around “man.”

“If you know who I am, then you know why I’m here to kill you,” Warty growled.

“Of course,” she said. “A hemophagic individual…”

Yara rolled her milky eyes and continued, “A hemophagic individual supposedly hurt someone you loved…”

“She bled out in my arms,” Warty said tightly.

“Please stop interrupting,” Yara said, “It’s very rude.” The vampires behind her raised their hands and uptwinkled in agreement.

“Someone you loved was hurt and you blame all the persons who share the same disease that the supposed killer or killers also have. Is this correct?”

“And you feel that you need to kill everyone with the same disease?”

“The vampire threat…” Warty began. He was drowned out as the assembled bloodsuckers started barking in tandem.

It was so strange, Warty took a step back. “What the fuck?”

The short fat little vampire raised her arm and the barking stopped. “Please do not use the V-word,” Yara said. “We find it very offensive.” They all nodded, even the little girl trying to gnaw her way into the marrow of the denuded humerus she held.

“We have a disease, but we are not our disease,” Yara said crisply. “We are victims of an infection none of us chose.”

Someone behind her coughed loudly.

“An infection that most of us didn’t choose,” Yara corrected herself. “Please forgive me Archibald.” A pair of hands uptwinkled behind her.

“Victims?” Warty snorted. “You just murdered everyone in this entire town.”

“Yes, an unfortunate side effect of our disease. Sacrifices sometimes have to be made.”

A vampire staggered forward out of the crowd and vomited a spray of blood at Warty. He leaped back before the spray of blood hit him and he ordered his shoulder-mounted gun to fire. The vomiting creature was peppered with a dozen balls of compressed holy water. The vampire was drenched, and the ones near him were splattered. Their skin smoked and split where the water hit them. But the one that took the direct hits just kept vomiting, leaning over, his hands on his knees.

“Yes he was!” Warty replied.

“They is just sick. Them not mean anything by it.”

“Why are you talking like a retard?” Warty asked, still in a defensive crouch.

“Wallid’s preferred pronouns are they and them, you shitlord,” the little girl snapped. She threw the splintered humerus at him weakly.

All of them had backed away from the vomiting vampire. They was just down to dry heaves at that point, them stomach convulsing painfully.

“What the fuck is wrong with… “ Warty asked, pointing.

“Wallid is still learning to digest blood. They is so brave. We are all very proud of them,” Yara said.

“Well, if you must know,” Yara said primly, “Wallid is a transhemophage.”

Warty pulled up an infrared view on his tactical display. Wallid stood out bright red and yellow against the group of ambient temperature wraiths ringed around him.

Yara backed up and started to raise her arm.

“You dipshits start barking again, it’s holy water enemas for all of you,” Warty said.

“Test me on this,” Warty said, and gave them a very scary smile.

Wallid straightened up and glared at Warty.

“You’re just so… so…,” they said, grasping for something truly hateful to say, “Reductive.” The sneer turned into a triumphant smile.

Warty pointed to the vomited up blood. “Reduct that, dumbfuck.”

“I am a vampire,” Wallid said. “I am. Ever since I was a small child I felt like a vampire. I’ve always known.”

“You used the v-word,” Warty said.

“You’re surrounded by vampires, idiot. Just get one of them to turn you.”

“Some transhemos choose to stay non-bit; some are pre-bit,” Wallid said. “You don’t define me.”

Wallid looked around, stricken. A few of the other vampires nodded at him sadly. He though for a moment, then screamed and began to beat at his clothes and ran away.

“Wallid is an important member of the HLPQT+ community and you just humiliated they,” Yara said. She bared her fangs and hissed.

“HLPQT+ community?” Warty asked. “Aw, fuck it.” He staked Yara and she blew up like a tractor tire filled with blood and guts and more blood.

“There is no Master,” the demonic little girl told him.

“We operate on more of an adhocracy model, forming committees to tackle specific problems within the community and then disbanding,” the tall blond Desdomelda said. “For decisions that affect us all, we come together for a series of democratic votes, each vote weighted to reflect the intersections of prejudice and obsession the individual voter experiences.”

“This making any sense, caveman?” the little girl asked. Warty stepped forward before any of them could react and kicked her head clean off. It sailed out behind the horde and disappeared.

“Violence is the last refuge of the moron,” Desdomelda sniffed.

Warty unzipped the timesuit crotch and the Doomcock 2.0 deployed from its pelvic silo.