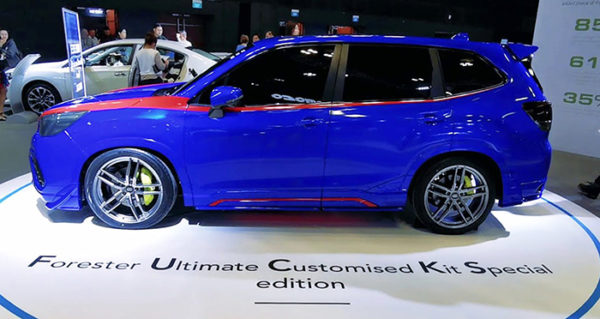 “Be quiet!” he said in an urgent whisper. “It might hear you.” The vendor booth they were hiding in shuddered as the Subaru stomped passed.

“Sharon!” he whispered. “Get ahold of yourself! Panicking is not going to help us.”

Ron took her by the shoulders and shook her until her teeth rattled. “Be quiet!” When she opened her mouth to say something, he slapped her and then slapped her again.

She sniffled and held a hand to her face and glared at him, but she was quiet.

“FUCKS!” the Subaru roared. The sound was further away now, combined with ripping metal and shattering glass. He chanced a quick look over the table of the booth. It was raping a minivan. “FUCKS!” it groaned.

“It’s right by the main exit,” he told her, ducking back under the table.

“Wha-what about the other doors?” she asked in a quiet voice. Her eyes were angry and red and his handprint was blooming on her face.

“Dead bodies all around them,” he said.

“How are we going to get out?” Sharon asked.

Screams. Ron looked over the table. Three people rushed the Subaru, hitting it with folding chairs. He saw it was a distraction. A group was rushing the main exit. The Subaru pulled itself out of the ruined minivan and dropped on all fours, crushing two of the attackers. It rolled over the third and began honking and raping and revving its engine.

“Mark!” a woman in the group screamed as she was dragged through the exhibition hall exit. The Subaru stood, its penis, glistening with motor oil and blood, dropped into a lower gear and rumbled. It waddled toward the exit doors. “FUCKS!” it screamed as it slammed into the doors.

Ron got back under the table.

“Why build an electric blue Raparu with a four-speed manual penis?!?”

“FUCKS!” the Subaru rumbled. It mounted a hatchback and flipped its high-beams on and off in orgastic pleasure.

“We should run now, Sharon,” he told her calmly. “It’s away from the exit now.”

“I bit my tongue when you shook me,” she said. She opened her mouth to show him.

“Goddamit, Sharon,” he said and vaulted over the vendor table. He ran, dodging car parts and dead booth girls and the abstract pieces of destroyed displays.

“FUCKS,” the Subaru screeched. It reared back and ripped the hatchback door off. It dropped back down to all four wheels and raced toward him, the still-deployed penis digging a furrow in the cheap industrial carpet of the exhibition hall.