Why I’m not taking coronavirus seriously

In these times of strife, I have been taking this coronavirus thing in stride. I’m really not worried about it. Yes some people have died and some more will die. But I still feel that the response taken by government has been over-reactive. My attitude has been labeled by some in our culture as “Not taking it seriously”, or “Denying the importance of the coronoavirus.” or “downplaying it” (looking at you Dave Smith).

So after some pondering I have decided to write a quick essay on why I’m such a denier. Let me show you why I fucking hate science.

The reason why I’m not worried about this is because that is precisely what the tyrant politicians want me to do. Let me give you some examples. First we have AOC, who in a Glengerry Glen Ross way has managed to Always. Be. Commie-ing. Now with “Emergency Measures”, which of course turn to “Always Measures”. 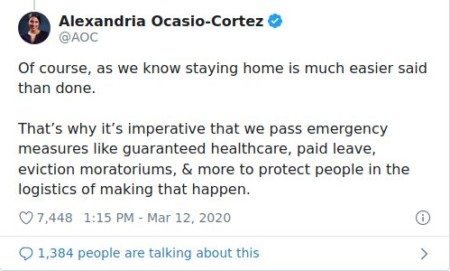 Then you have the NYC Mayor, who was so popular that he placed behind a small time mayor from Indiana in the presidential primary. De Blasio has called for the nationalization of critical Emergency companies and factories in order to ensure 24/7 production. What no one asked was the unstated assumption, that De Blassio was willing to conscript factory workers to work much longer hours than they were willing to work already, and that the market was willing to pay. Still he insists that we need to treat this like a war (an eternal favorite for progressives), so i guess this would just be #WarSlavery.

And don’t think the GOP gets off with a clean bill of health. They have decided, like buck private at a whore house , that just pumping money into the situation will somehow make this mess go away. Anything and everything must be done to stop a recession that would unseat the president they have all denounced.

And this isn’t even mentioning all the Governors, and lower executives who are euphorically exercising their own emergency powers to do things ranging from the medically plausible to naked power grab: Force people to stay at homes, Close businesses, restrict Gun sales, stop accepting online FOIA requests and impose curfews. But don’t worry its all for our best interest.

Now I can’t only fault the politicians. Seizing power is in their nature. Panic, like war, is the health of the sate. But what about our great 4th Estate? How have the Journalists been keeping those politicians in check? Lets Check in with Rania Khalek:

Civil liberties are important, but in a pandemic I think it’s right for the government to impose extreme restrictions to prevent spread, including shutting things down, quarantining areas and making people stay home. Why is this even up for debate? https://t.co/CvuAsbYXh8

Rania, like the rest of our media class, falls into what I call “Mental Fascists”. They cannot conceive of any way things could be resolved that happens Outside or (heaven forbid) in contra to State driven solutions. So while our civil liberties are whittled away, the class of people who — during good times — claims to be the stalwart defenders of them, explains why akshually we really don’t need them in this one case because Daddy Government will make all our choices for us. If that choice leaves you destitute, well your just being selfish because you wanted some granny in Maine to die.

Of course, the real joke is on all of us. Because we are the fools who thought that things like constitutions, checks and balances, and independent oversight would save us from having to make hard choices about our governance. We hid behind those things so as to not have to face the reality that any government is and will be as powerful as people are willing to let it be. We blame the politicians for being tyrants, when it is our fellow man who cowers, begs and pleads for the politician to exercise his fearful might.

So I’m not worried about Tom Hanks Disease/Wuhan Flu/Mao’s Revenge. No, I’ll stay away from stores for now, work from home and be prudent. But I’m not worried about it. I’m worried about the state of our country, and the caliber of its subjects. And during this time of mandatory isolation, I’m going to be busy figuring out how to make sure I’m permanently isolated from the Politicians, the Idiots and the Fools.

– Slammer on the Californians call 911 link

– Gustav and Don for the FBI FOIA link

– The rest of the Glibertariat (i don’t know who) who shared the majority of the tweets and links in this article. Thank You.