A Song of Ice And Choirs: Factionalism in the Utah House 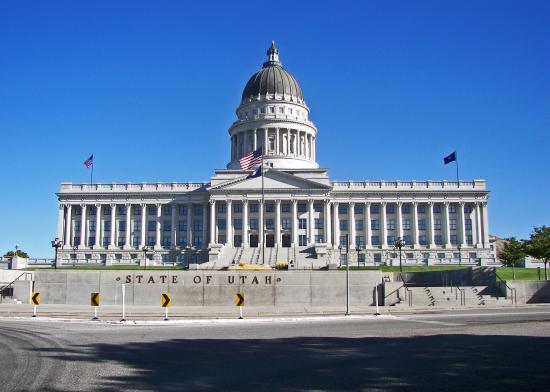 March 12, 2020 marked the end of another legislative session in Utah. For the politically unaware, Utah is a red state. Ever since 1994 the Republican party has controlled at least 50 of the 75 state Representative seats. After a quarter century of the democrats being an almost total irrelevant opposition party, it is not surprising to see the real political struggles to be between competing facti ons within the Republican caucus. By investigating the voting patterns of the members I believe we can see what factions are contained within the house and how they measure.Thankfully Utah has a very simple record of each vote taken on the floor, and the votes of each legislature in each session. With a little Python, and some HTML parsing, we are able to explore that data.

In 2020 the House voted 1324 times, on motions, bills or other items. A little under half of those were voice votes, leaving us with 699 recorded votes. The House rules are fairly strict. During floor debates all members are required to be present, unless excused, and must vote either Yay, or Nay on every motion. This means that the only abstentions in our data are from members who were not present for the vote.

The almost all of the votes were on Final Passage of a bill. Only 6 times was the house divided for a vote to amend, and only once was a vote to terminate debate held. Only 23 motions failed to pass.

In order to analyze the composition of the factions within the House, I decided to use a hierarchical clustering algorithm. This algorithm works by plotting the “distance” each legislator is from each other, with regards to their voting pattern. In short if two legislators always voted the same, they would be next to each other, and two who were always opposed would be far away.  The algorithm then builds “clusters”, by adding the two closest legislators into a cluster, and then repeats that process until there is only one cluster. In this way a “tree” is built out of representatives and you can see how close each rep is to each other and what groups they tend to vote with.

Of the 699 recorded votes, only 258 were not unanimous. For the purpose of this analysis, I have excluded all the unanimous votes as they don’t provide us any real information. The remaining data presents us with this hierarchy tree (dendrogram in analyst speak), of the House. 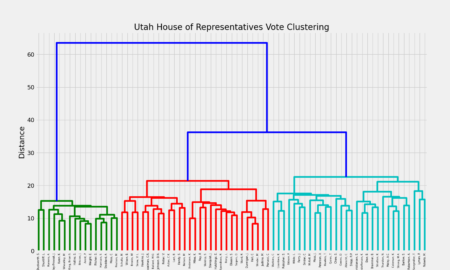 The Lines are Drawn…

Quickly, I’m going to explain how to read this graph. Along the bottom is the name of every legislator. The Y axis maps “Distance”. A line extends from each legislator and moves up, increasing in distance. When two legislators are within distance y of each other, their lines merge and they form a cluster. This process proceeds until all lines have merged. By selecting various height to cut the tree at we can create different clusters. When I say distance, it is best to think of it as a measure of “Dissimilarity” rather than a meaningful distance.

In my opinion I think it separates pretty neatly into 3 core factions. There are some technical analysis that I could do to get some kind of “confirmation” of that, but a lot of it is feel, and the story I want to tell. In Green you have the Democratic Representatives. They are very tightly clustered, voting almost always as a consistent block. Then you have the Republican party, split into two, almost equal factions. Looking at the names in that group, and cross matching with The Libertas Institutes “Legislatvie Index”  I can see that the Red Group represents the “Centrist” Republicans, and the Teal Republicans represents the more “Libertarian” Republicans. That leaves a split of 16 Democrats, 29 Red Republicans, and 30 Teal Republicans.

But what affect do these really have? Well, i have no real data for this but I would postulate these interesting tidbits. The current Speaker of the House is a “Red Republican”, however the Charmian of the Rules committee (the most powerful committee in the house, is a “Teal” republican). I have nothing saying this did happen, but it does seem that the Teal and Red Republicans cut a compromise to divvy up the power in the house. In a follow on post I will use these groups to analyze actual votes that occurred in the House, and see if we can suss out details of backroom machinations in action.