No one told me every Subaru came with its own gaijin ghost girl. I did not even know she was a ghost girl at first. She was not wet. Her uncombed hair did not hang in her face. Her teeth were not black. She smiled and opened her mouth and there was no chorus of horrors from the depths of Hell. I was very confused.

Once my bicycle, basketballs, and guitars had all disappeared from the rear storage space, I was very concerned. But there, across the street, was smiling ghost girl. Once I drove away she was in the seat beside me. She did not smell badly and seemed very clean. I asked my friends if they could see her and they said no. They tried to take my keys from me. They said I had been drinking. Smiling ghost girl frightened them until their hair turned white and they became figurines for sale in a vending machine. I apologized to my friends. I had no change.

I took my new Subaru to the dealer to talk to them about my smiling ghost girl. Maybe there was a recall issued. That is when I found out about the new car ghost girl mandate from the government. Ghosts girls would wander all over Toyko and in many of the smaller cities and villages. This caused much disruption in local economies and hundreds of gruesome deaths. It was decided to weld the charred bones of a ghost girls in the frame of every new car and mix their ashes into the paint. This made the ghost girl the responsibility of the car owner. The girl would stay with them and not kill them and even be their ghost girlfriend if they wanted. The dealer said the new law was talked about on the television and reported in all the newspapers. I do not remember hearing about it. I cannot return my haunted car. 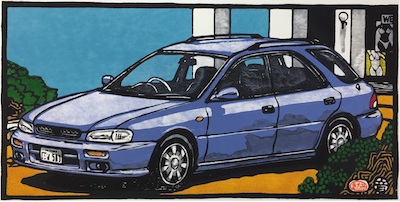 Except for brief visions of her screaming in my face with a distended mouth, and I have gotten used to my smiling ghost girl. She does not speak and never tries to change the music. She stays in the car all night. I never have to take her to dinner or buy her presents. She cannot text me or call. She is a good girlfriend in these many respects.

More and more cars have their own ghost girls. I see her waving to them and giggling behind her hands. At least four every time we go anywhere. Why do we have so many ghost girls? Why is mine smiling all the time when she isn’t screaming in my face? I cannot even ask her how she died.

I look at her and she looks at me. The sunlight is shining through her. She touches my hand out of doomed attraction. All I feel is cold.