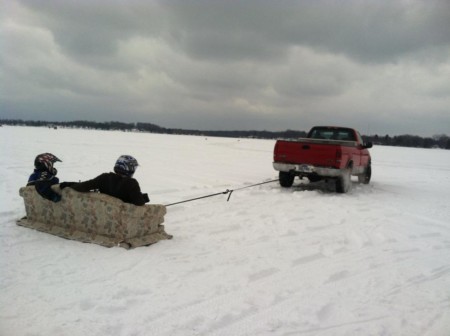 Note:  A prologue from my upcoming autobiography, Life’s Too Short to Smoke Cheap Cigars (Or to Drink Cheap Whiskey.)

Let’s talk for a bit about one of every American’s favorite winter pastimes.

By Way of Background:

In the wooded hills of Allamakee County, one of the best things about winter was sledding.  Well, after hunting, ice fishing and running the trapline, anyway.

Granted our equipment wasn’t always up to par.  Broken-down old sleds that may well have predated the one famously referenced in Citizen Kane were the norm, and occasionally trash-can lids, sheets of plywood and other such things were pressed into service.

In our younger years, our sledding was pretty traditional, though, aside from the antiquated and sometimes homemade equipment.  The heavy timber on most of the Allamakee County hillsides made it a bit dicey at times, but we managed to find safe places like the farmstead lanes where we could make our descents without slamming into a trunk.

Of course, once we had drivers licenses, another local tradition came into play, which involved tying a sled (or a sheet of plywood, or a couch) to the back of a car and “sledding” at what was more often than not a reckless speed. 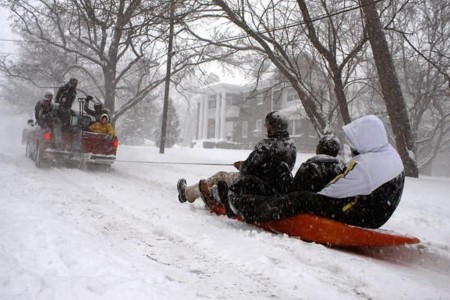 Not the best idea.

This didn’t always go as planned.  One afternoon we spent a good thirty minutes digging Mark Malek out of a drift after a sharp left turn sent his sled into the drifted-shut ditch; his size made the excavation a considerable project.  Broken bones and concussions weren’t unusual, but we took that with aplomb; such things were accepted as part of a normal country childhood.

But then there was the time we tried it in the summer.

It all started one July afternoon the year I was sixteen, when the temperatures were in the nineties, the fish weren’t biting, and my old buddy and partner in malfeasance Jon and I seated on my parent’s front porch, reminiscing about the nice cold winter before and laughing over some of the sledding antics from that season.

“Say,” Jon suddenly piped up, “You know, we could probably figure out a way to sled in the summer.  All we need is a nice grassy slope.”

“Where are you going to find one of those?” I asked.  I inclined my head to indicate the heavily forested hill across Bear Creek from the folks’ house.

A few miles from my folks’ place, on one of the expansive Duffy farms, Waterloo Creek ran for a couple of miles through a deep cut between two hills.  While hills and valleys were usual in that country, this one was both steeper and deeper than most.  For some reason, the locals called it Gristle Canyon.

The slopes of Gristle Canyon were indeed mostly treeless, mostly because the slope was so steep that trees couldn’t easily take root.

“Come on,” Jon urged.  “I’ve got an old tarp in The Van we can use to sled down the hill on.  Ole Duffy’s back pasture track goes right up to the top of his hill.  I’ve got permission to shoot woodchucks on his place, so he won’t mind us driving in there.”

I wasn’t too sure, but it was a pretty dull afternoon.  I decided to go along with it, just to see what would happen.

In retrospect, I should have known better.

An hour later, we stood at the top of the precipitous slope of Gristle Canyon, looking down.

“See,” Jon pointed, “It can’t be more than a couple hundred feet down.”

“I don’t know.”  I was decidedly doubtful.  I leaned over the edge of the bank and looked down.  “It looks more like four or five hundred.  Pretty steep, too.” 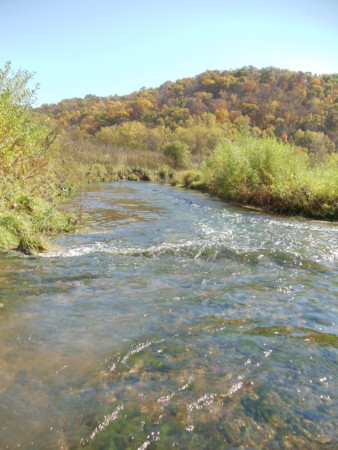 The actual by-gosh Waterloo Creek, only in summer.

“It’s nice and grassy.  Nothing to run into until you hit the creek at the bottom, and you’ve got plenty of room to stop before that.  Go on, try it.  Fold that tarp in half – there, like that.  Now set down on it.  Indian style.  Cross your legs, yeah, there you go.  Get a hold of the front edge – get a good grip.  Hold it up a little.  Yeah, just like that.”

Jon put his right boot in the middle of my back and shoved.

From up on the hillside that overlooked Gristle Canyon, it hadn’t looked like there were that many rocks hidden in the grass.  I hit the first of them about twenty feet down the slope, a particularly large and hard rock that left a sore spot on the part of my anatomy that was placed on the canvas.  I knew he’d have a colorful bruise there later, but other things commanded my attention first.

About fifty feet down, at about thirty miles an hour, I hit a small bench.  I skidded across it, trying to brake with my behind, but it didn’t work.  As I shot across the small grassy bench, I had the fleeting image of a mound of dirt and a flash of brown fur just before the tarp hit the edge of the bench and resumed the plummet downwards.

There was suddenly a feeling of weight in my lap.  I felt something move.  I looked down to see a terrified woodchuck in my lap.  The groundhog looked up at me, eyes wide in terror.

“Hang on,” I heard Jon’s voice, faintly, calling down from the top of the slope.  “You’re about to hit the steep part.”

The canvas folded up in the wind, plastering itself flat across my face.  There was a slight chirp of terror from the woodchuck, which dug its heavy, burrowing claws into my lap, uncomfortably close to some rather sensitive areas.

A series of rocks left a series of bruises in my already tender fundament as the woodchuck and I skidded across them at forty miles an hour – maybe fifty.

“It can’t be much farther,” I shouted to the woodchuck.  That was pure bravado, as the leading edge of the tarp was still covering my face.  The woodchuck let out another terrified squeak.  Together, we managed to fight the edge of the canvas down, just in time to see the one tree on the slope looming large.

The impact knocked the canvas, the woodchuck and me sideways.

Now we were rolling, not sliding, down the slope.  The canvas wrapped itself around me and the woodchuck.  Bound together like two frightened peas in a pod, we rolled, bouncing over the rocks, down the slope to the creek at the bottom.

A large splash announced the end of the ride.

As Jon watched from the top of the slope, I dragged myself out of the water, the woodchuck under one arm, dragging the canvas behind.  I set the woodchuck down and patted it on the head.  The woodchuck looked up, staggered in a complete circle, and sat down.

I looked up the slope, frowned, and started climbing.

Finally, after about forty-five minutes, I made it back to the top.  I was dragging what was left of the tattered, sopping wet canvas tarp.  I looked down; the woodchuck had followed me up the hill, apparently feeling some bond due to the traumatic experience we had suffered together.

Jon looked at me thoughtfully.  “I’ll have to try that myself someday.”

“Oh,” I said to him through gritted teeth, “I don’t think so.  I think you’re going to try it right now.”

A few moments later, after we threatened Jon with mayhem, the woodchuck and I watched his descent.  He didn’t make it past the tree, hitting it squarely rather than the glancing blow we had managed.  But he did get out of it with nothing worse than a couple of cracked ribs and a few teeth jarred loose.  The woodchuck and I conferred after Jon regained consciousness and headed back up the hill; when he arrived, we informed him we had decided he rated an eight for the difficulty of the routine attempted, but only a six for execution.

Eventually I grew up and had kids of my own, which was nature’s way of repaying me for the headaches I caused my parents.

The sixty acres of hardwood timber where I grew up had two meadows ‘up top’ on the top of the hill, while the house sat along the creek in the valley.  The flat creekside bottomland was connected to the upper and lower meadows by the Woods Road, a simple graveled track the Old Man maintained by tractor with grader and bush hog.

In winter, the Woods Road made surprisingly good sledding, save for a sharp right turn at the bottom, where we had made a cut through the steep bottom slope of the hill.  Snow tended to drift in the cut in winter, and on the outside of the curve where the hill provided a windbreak.  Sometimes that stretch just outside of the curve would drift up feet deep, just to the side of the road where we kept a path cleared.

Came the winter when our oldest daughter was about seven.  The folks had purchased an old wooden toboggan that the older grandchildren used on the Woods Road.  Our daughter was not yet one of the ‘big kids’ allowed to use the toboggan alone, but one afternoon she convinced her grandfather to take her sledding.  I trailed along to watch.

Our oldest loved her Daddy (and still does) but she absolutely worshipped her Grandpa, so she ran ahead and grabbed his hand, chattering away.  The Old Man pulled the toboggan behind by a length of rope.  I clumped along after, but when we passed the first bend in the road I spoke up.

“Dad,” I said, “we usually only sled down from the bend by the blackberry thicket.”

“I know,” the Old Man replied.  “But it will be a nice long ride if we start at the top by the big oak.”

“You’ll be going pretty fast by the time you hit the bottom.”

“OK,” I said.  I was feeling somewhat doubtful.  “I’ll wait here and watch you go past.”

A few minutes later, they blew past me at a considerable clip.  The Old Man was in front, holding the piece of rope attached to the front of the toboggan, a sternly repressed look of alarm on his face.  My kid was behind him, clinging to his coat, squealing in delight.

A few moments later I heard a thump from the bottom of the road.  I walked on down to find the Old Man extricating himself from the snowdrift.  His glasses and open coat collar were full of snow.  My little girl, smaller and lighter as she was, had flown over the Old Man’s head when they hit the drift, bounced, and rolled, and was now standing atop the drift giggling wildly.

The Old Man, deadpan as always, just looked at me and said, “Well, that wasn’t how I expected that to go.”

Suddenly I didn’t feel so bad about some of my own similar lapses in judgement.