And Now, For Something Completely Different

I’m going to expand on some deep thoughts I presented over at my own web site a couple of years ago.

Should Dueling be Legal?

Here’s a fun little libertarian mental exercise.  Should dueling be legal?  I’m not talking about sparring on Twitter or in the comments section of some news story.  I’m talking honest to gosh, 18th century-style, pistols at ten paces dueling.

Dueling has been illegal everywhere in the United States, indeed in most of the Western world since the early 19th century at least.  But let’s set aside our ingrained prejudices for a moment and ask ourselves, in a society that honestly and completely exists under the concept of liberty – should it be?

Let’s do a thought experiment. 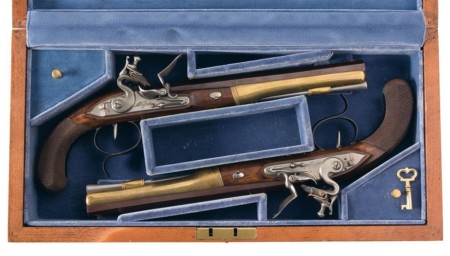 I’d use these, just for the sake of tradition.

Two men (or women, or one of each, whatever) have a serious disagreement, one which cannot be reconciled by any normal means.  Courts have been unable to arrive at a settlement acceptable to both.  Counsel has failed.  They are well and truly at loggerheads.

So, both of them, as capable, competent, consenting adults, in full possession of their faculties, agree to pistols at sunrise to settle the dispute.  They meet in a field with their seconds, who oversee the loading of the pistols; they take their places, step away from each other on the count and, when indicated, turn and fire.  One is killed, the other emerges the victor.

Now – answer me this – what crime has been committed?

Oh, yes, I know there is a statutory crime committed.  But has there been a moral crime?  Both parties went into the affair knowing that death was a likely outcome.  I’ve read that back when the code duello was more commonly practiced, it was considered the gentlemanly thing to do to just pink your opponent in the arm or leg and claim victory without fatality, but fatal injuries were a normal outcome; it even happened to one of the more famous of our Founding Fathers.

So.  Should dueling be legalized?  I’m inclined to say yes.  If, in 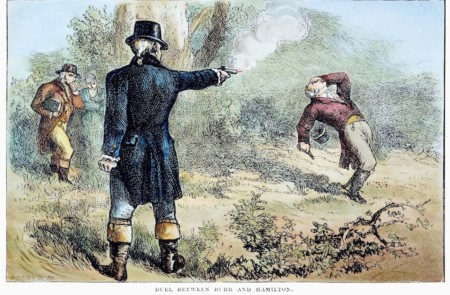 a society based first and foremost on the principle of individual liberty, two parties agree to settle their differences in one-on-one mortal combat, knowing the outcome is likely to be at least one of them shuffling off the mortal coil, then what role does government play in preventing them from so doing?

Obviously there would have to be some limits.  You could scarcely allow a duel between two people using nuclear weapons as the weapon of choice, for example.  I’d be willing to consider the following restrictions:

The trouble here is as with so many things; the limits here would have to be legislated, and as it is the nature of government to grow ever larger and more intrusive, eventually the code duello would be so full of requirements and conditions as to be useless, kind of like the tax code.  Really, it would be better to have the government as completely divorced as possible from the process.  The only law that applies would be contract law. 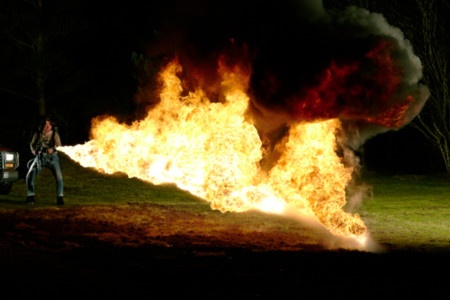 Then again – why not?

“But Animal,” some might ask, “wouldn’t a duel have the possibility of setting off a vendetta, say between two families?”

“Sure,” I’d reply, “…and as long as all parties agree to the code duello and the likely consequences, and follow the guidelines and rules applying, then, fine.  I really have very little problem with families who are so prickly that they can’t settle their differences by non-lethal means thinning themselves out thusly, and besides, you can only have the duel if both parties agree; this makes it pretty easy to break the chain.”

“Even so,” the questioners go on, “wouldn’t you have the possibility of a revenge killing outside the code duello system?”

“Again, sure,” I’d reply, “…and that would be a crime, to be dealt with by the legal system just like any other premeditated murder.”

“But wait,” comes one final question, “…what about the Non-Aggression Principle?”

“That’s an interesting one.  It seems to me that both parties are initiating aggression in unison, by prior agreement under conditions also agreed to.  So, yes, both parties are violating the NAP – and neither are.  As the initiation is simultaneous – say, five paces, turn and fire – then both are initiating, and both are responding.  You can make an argument here that the NAP doesn’t apply.”

Of course, this is just an intellectual exercise, and it’s unlikely in the extreme that dueling will ever be legalized, anywhere, in our modern era and, honestly, one would hope that civilized people have better ways to resolve their differences.

But the veneer of civilization is pretty damn thin.  If things ever got to the point where trial by arms was again an acceptable way to settle differences, it would be best to have some kind of guidelines around how to conduct those trials.

More to the point, I find the moral question interesting.  It seems to me that a duel is morally acceptable if both parties are competent adults, fully informed, and willing to sign on to a legally binding agreement to enter into mortal combat.