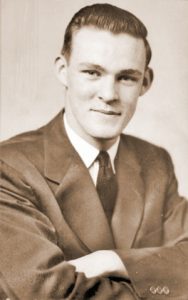 Appearances Can Be Deceiving

The young fellow to the left no doubt looks like a calm, mild-mannered young man, with his neatly coiffed hair and spiffy suit.  Doubtless a young man of promise, who will go on to manage a hardware store or perhaps sell cars.

That is not the case; this is the young Joseph Beryle, one of America’s premiere Second World War badasses, a guy the Germans couldn’t keep locked up, the only soldier to make his fellow troops feel inadequate in both the U.S. Army and the Soviet Red Army, and the latest subject of our Profiles in Toxic Masculinity.

Joseph Beryle was born on August 25, 1923, in Muskegon, Michigan.  His parents, William and Elizabeth Beryle, were a factory worker and a housewife, respectively.  Joseph’s father lost his job early in the Great Depression, after which the Beryles were evicted from their home and moved in with Joe’s grandmother.

Growing up in the Depression had its challenges, as my own parents often described in detail.  The Beryles dealt with things as many other folks did in those days; by finding a way to get by.  Joe’s two older brothers dropped out of high school to join the Civilian Conservation Corps, and so Joe was able to finish high school and even win a full scholarship to Notre Dame.

But then, Pearl Harbor happened, and young Joe passed up the Notre Dame scholarship to join the U.S. Army’s 506th Parachute Infantry regiment.  The 506th was, of course, part of the 101st Airborne Division and the same regiment from which came the men described in Stephen Ambrose’s book Band of Brothers. 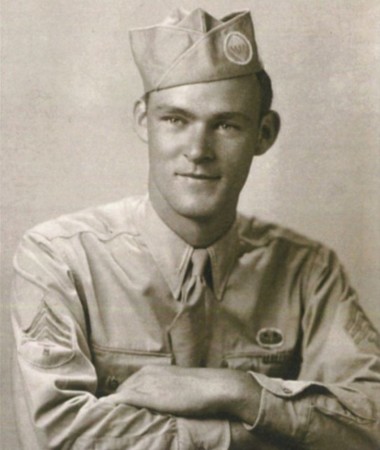 Training for the paratroops was some of the toughest training the U.S. Army did in World War 2.  Beryle apparently got through the Camp Toccoa training with little trouble.  Paratroopers were required to make a certain number of jumps to qualify, and it seems some of Joe’s fellow soldiers weren’t terribly keen on it, so Joe would take their places on training jumps, getting them their jump credit on the sly; this earned him the nickname “Jumpin’ Joe.”  Once he was at last a fully qualified paratrooper, he was sent forthwith to Ramsbury, England, to continue field training.

There was one problem:  Maneuvers, sand-table exercises, and field problems bored Sergeant Beryle.  There was a need for a paratrooper with balls to jump into German-occupied France with gold for the French Resistance.  Sergeant Beryle apparently thought this would be, as the Brits say, “a bit of a lark” and so volunteered – twice – for a mission that would have gotten him shot if he were captured by the Germans.

It was on The Longest Day, though, that Sergeant Joe Beryle’s real odyssey began.

On the very early morning of June 6th, 1944, Joe Beryle found himself along with many of his fellow paratroops, in a C-47 transport plane bound for Normandy.  On the approach to the drop zone, the C-47 came under heavy fire, forcing the men to jump early and, like so many other members of the 101st and 82nd Airborne divisions in that exercise, to be scattered and lost.

German troops in the French village of Saint-Côme-du-Mont woke early that morning to find it was raining Michigan badasses.  Jumpin’ Joe came down on the roof of the church and, while under fire from a German rifleman, calmly cut himself free of his parachute, loaded his M1 carbine and started killing Germans.

One of Beryle’s unit missions was to blow up the power substation in Saint-Côme-du-Mont.  Alone, Jumpin’ Joe nevertheless had some Thermite and a huge pair of solid titanium balls, so he found the substation, killed a squad of Germans around it, and blew it up himself.  He used his supply of grenades to kill another squad of Germans who came to investigate, then blew up a bridge to prevent more Germans from reinforcing the village or the troops defending Utah Beach.

He then stumbled across a German machine-gun position and, finding himself facing ten armed and pissed-off Krauts, was forced to surrender.

Trouble was, the Germans didn’t know they were trying to imprison a demon in a corncrib.

On the march back towards a German POW collection point, the column Jumpin’ Joe was part of was bombed and strafed by aircraft.  Whose aircraft it was remains unknown to this day, but Joe used the opportunity to escape – after being hit by shrapnel and blown into a ditch, he legged it for the horizon but was captured by a German patrol after twelve hours on the lam.

Joe was then loaded into a truck bound for the French town of St. Lo, which was still held by the Wehrmacht.  The truck was strafed, this time by Allied fighter-bombers.  Joe used the resulting chaos to attempt escape again but was caught.

I was interrogated 20-24 hours a day, they were trying to get all the usual questioned answered. “Why me, a German, was I fighting for the Jews Roosevelt and Morganthau against my own people?”

Sometime during the questioning, I called a German officer a “SOB” and woke up several days later in a hospital with a big headache and a bashed head and later I was taken back to the monastery.

Finally, it dawned on the Germans that this stubborn guy from Michigan was going to try to escape again no matter how much they abused him.  In September of 1944 Joe was sent to a POW camp in Poland containing mostly Russian soldiers. 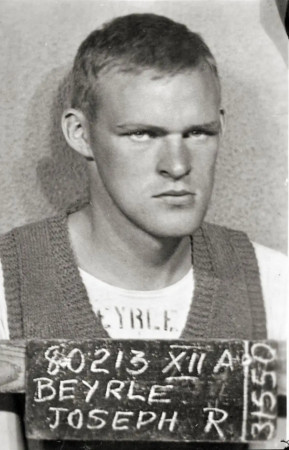 Joe as a POW and still intimidating the shit out of the Nazis.

The Germans treated Russian prisoners even worse than Americans, but that didn’t stop Jumpin’ Joe from enlisting some fellow American prisoners in his next escape plan.  One night in November, the four cut through some barbed wire and hopped on a train that they thought was headed east towards advancing Soviet troops.  Bad luck, though, as they caught the wrong train and found themselves in Berlin and ended up in the hands of the Gestapo.

About that interlude Joe later related:

In the next 7 to 10 days, we found out everything we had heard about the Gestapo was true. We were interrogated, tortured, kicked, knocked around, walked on, hung up by our arms backwards, hit with whips, clubs, and rifle butts. When you thought they could do no more, they would think of other ways to torture you. When you would slip into semi consciousness, they would start again.

Eventually a Wehrmacht officer found out about the Gestapo’s prisoners and protested, claiming the Gestapo had no jurisdiction over military prisoners of war, and so Jumpin’ Joe found himself out of the Gestapo frying pan and into a larger, Wehrmacht frying pan known as Stalag Luft III.

Stalag Luft III had been opened in Poland in 1942 and was considered escape proof.  Once Jumpin’ Joe got his strength back from the Gestapo abuse, he put that assertion to the test.  In January of 1945, Joe and three other allied POWs broke through a wall and ran for it.  Joe’s three companions were shot and killed but Joe escaped.

On the run in frozen Poland with a pack of German troops and dogs on his trail, Joe plunged into an icy river and followed it downstream for several miles to throw off the pursuit.  Finally, he reached the Soviet lines.

Once more at least in (sort of) friendly hands, Jumpin’ Joe was taken to the battalion commander, one Aleksandra Samusenko, the only female tank commander of World War Two.  Recognizing each other’s inherent badassery, the two quickly established a rapport in spite of Joe’s minimal Russian.  Samusenko found Jumpin’ Joe’s request to join her troops convincing, and the fact that he had demolitions experience was a plus.  Thus, Jumpin’ Joe Beryle became the only soldier to serve in both the American Army and the Red Army in the entire conflict.

Later that month, the Red Army battalion Jumpin’ Joe was assigned to liberated Stalag Luft III.  That had to be satisfying.  But in February, Jumpin’ Joe’s unit was attacked by German aircraft, and Joe was wounded. 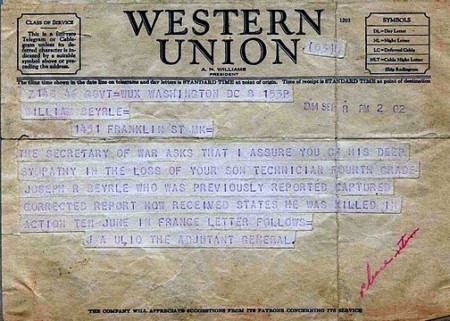 The Red Army sent Joe to a Soviet hospital in Landsberg an der Warthe.  While there, word got out that there was an escaped American POW serving with the Red Army, and so in a Forrest Gump-like moment, Joe received a visitor – one Marshal Georgy Zhukov, who arranged for Joe to be sent to the American Embassy in Moscow.

There was a problem – Joe had been declared killed in action back in 1944, and his family notified by telegram.  There had even been a funeral Mass held in Muskegon.  Joe was held under guard until his fingerprints were verified, and then had a long trek to Odessa, Cairo, and Italy before finally arriving back in Muskegon in April 1945.

Home at last in April of 1945, Joe celebrated V-E Day in Chicago.  The next year, he married JoAnne Hollowell and started a 28-year career with the Brunswick Corporation and, by all accounts, let an uneventful post-war life.  One exception to that peaceful existence came on the 50th anniversary of D-Day, when he was invited to the Rose Garden to receive medals from U.S. President Bill Clinton and Russian President Boris Yeltsin.

Joseph Beryle passed away in his sleep on December 12, 2004, during a visit to Toccoa, Georgia, where he had been trained as a paratrooper.  On the wall of the church Jumpin’ Joe landed on in Saint-Côme-du-Mont, France, there is a plaque that bears the following words in French and English:

No soldier ever was awarded a finer – or more appropriate – epitaph.