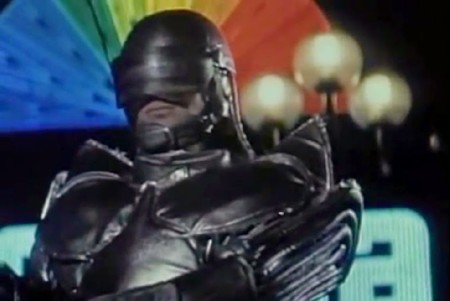 A Rainbow Warrior, dressed in pleather and bent hubcaps

Holy crapballs! We have hopping vampires, kung fu, android cops, slightly less boobies than last week but still boobies, and an incomprehensible plot! This is the first real Z-movie I have presented. Z-movies are a special grade. Worse than B-movies, these are often considered the lowest of the lot. But that in no way means Z-movies are unwatchable, or lacking in fun. I personally would rather watch Robo Vampire over The Last Jedi any day of the week!

Godfrey Ho is our director this week. He directed around 150 films during his career. How do you achieve something like that? He did it by reusing footage in a number of movies using a technique called “cut and paste” to stick together movies from common footage. He did not pioneer the technique of cut and paste filming, as you can see this same concept used in Three Stooges shorts. But Godfrey used it A LOT in full length features. It explains the disjointed plot of Robo Vampire. Legend says this movie is actually two different films glued together.

I can say the best thing to do is be on your second drink / gummy whatever you do by the time you press play and everything will work out fine. This movie is hilarious. Whoever dubbed it did so in a men’s room. Sound is bad, editing is bad, costumes are nigh-improvised. Welcome to the world of Robo Vampire! What have we got tonight?

This movie is legendary in Z-movie circles.  So legendary I expected a selection of merchandise, like bobbleheads.  Out of curiosity I looked around and I found a Robo Vampire miniskirt available. “Has anyone bought it?” you may ask.  Well, there are fifteen positive reviews for it my friends. “Sleek, sexy & flattering!!” says the first review.  The End Times are coming soon.

There was a Robo Vampire 2, called Devil’s Dynamite.
Shocker, there is a third sequel: Robo Vampire 3.
I suppose if you are running the TVs at Guantanamo Bay you could run nothing but Robo Vampire 1,2,3 all day until people break. (This is my idea, so if you are in the military and lurking in the comments section, send bitcoin to Glibertarians.com if you implement.)

If you enjoy this kind of wackiness you might check out the additional links above. If you hate it, take solace in the joy that starting next week is a string of newer movies! Since we are in October I will keep reviewing little-known horror comedies, beginning with DeathGasm.
Apocalypse! Death Metal! Extreme pancake makeup! Teenagers! New Zealand!

Watch it or don’t – everything is voluntary!