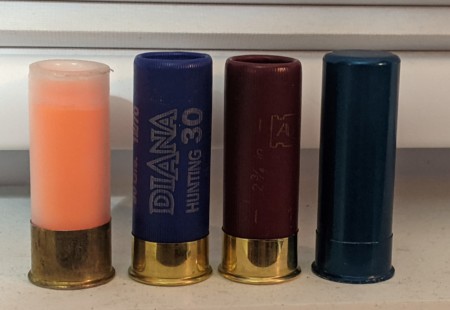 One of these things is not like the others

I am not a hunter, nor a tactical operator.  I am a Gun Culture 2.0 shooting sports enthusiast.  Therefore I buy gear and practice for gaming purposes.  YMMV.  I originally bought the el cheapo ones because I thought I’d buy a few dozen of them and sit and watch TV while practicing my dual/quad loading.* I discovered that if you’re not using a gaming shotgun, that you wind up losing your thumbnail while practicing, but that yes, you can dual load but when you get to the match, shit doesn’t seem to work.  It turns out that the ST Action Pro (STAP, pronounced “stahp”)  are contrary to their advertisement, significantly shorter than an actual 2.75″ shell, and this problem is doubled when you’re attempting to dual load.  So they’re pointless for what I need them for.  The A-ZOOMs on the other hand, work great.

As far as weight, the stahps are waaay under, and the A-ZOOMS are actually heavier that what I have around the house.  Maybe they’re weighted to duplicate buckshot/slugs?  No idea.

As far as durability, I have not had a problem with either of the dummies having their rims ripped off by the extractors in my shotguns.  I don’t know if autoloaders are gentler than pumps when being actuated manually.

I guess if you’re practicing cycling your pump shotgun, you could get away with the stahps, but if you want to practice reloads with something that are the actual size and weight of live ammo, they suck.

*I actually load weak hand since I still need to look at what I’m doing.  Maybe if I become serious I’ll switch to strong hand.  I’d need to figure out some other way of mounting shell caddies though.