“And so that’s how it happened,” Ted concluded.  “That’s how Albert got it.  It’s not really fair.  I know it’s not.  I got this little scratch on my shoulder (the field hospital, groans and screams from the wounded, the acrid stench of antiseptics, doctors and medics red-eyed from exhaustion), and Albert, well, Albert is in a grave in France.  When we got hit, I got out of the tank without a scratch, and Albert is dead.  It’s not fair.”

Ted and Penelope were sitting across from each other, in rough wooden chairs at a table that was so narrow as to nearly be a tall bench.  Penelope had served Ted two fried eggs and a couple of links of sausage that tasted odd.  “Moose,” she had explained, on seeing Ted’s puzzled expression.

The cabin was dim.  One narrow window on the south wall let in the sun.  Dust motes swirled in the air.  At least it was warm; the June day was mild.  Penelope’s dog, a medium-sized mutt of no discernable breed, lay on the floor next to her chair.  Outside, Ted could hear the chickens clucking quietly to themselves as they dozed through the early afternoon.

“No,” Penelope said at last.  Her eyes were red, but she had maintained her composure throughout Ted’s spiel.  “Nothing about war is fair, is it?”

“Go home to Edmonton.  I had a job in a lumberyard there before the war.  I suppose I can get my old job there again.  My uncle runs the lumberyard, after all.”  He managed a weak smile.  “What will you do?”

“That’s true.  Did your parents leave you this?”

Ted remembered his best friend’s description of his girl: “Probably the strongest gal I ever met.”  She lived up to the description.

“I will walk you to the automobile,” Penelope said.  She had a strangely formal way of speaking.

They went outside.  The sun was high in the sky, and a warm breeze was gently stirring the grasses.  Penelope walked with Ted down the narrow laneway to his old Grey-Dort.

As they reached the car, Ted turned to face her.  “Albert was my best friend,” he said.  “He was my brother.  If you ever need anything…”  He handed over a folded piece of paper.  “If there’s ever anything I can do for you, this is where I am.”

Penelope tucked the paper in her trouser pocket.  “Thank you,” she said.  “I will be fine.”

“Oh.  There’s one other thing.”  Ted opened the back door of the car and extracted an object, a bundle of cloth, oddly gray-green.  “Albert was talking about getting you one of these.  It’s a Kraut winter coat.  Heavy wool.  I picked it up in Germany when we overran a German supply depot.  Albert wanted you to have one, against the winters up here.”

Penelope nodded.  She took the coat, shook it out, examined it, then folded it and tucked it under one arm.

Ted nodded.  There didn’t seem to be anything else to say.  He cranked the battered old Grey-Dort to stuttering life, climbed in and drove away.

Penelope watched the battered old car turn left onto the road and rattle away in a cloud of dust.  She went back inside.  There were chores that needed doing, but they could wait.  They would have to wait.  She went back in the tiny house and hung the German coat up on a hook on the wall behind the door.

She ran a hand down the heavy wool.

She picked up the tin plates they had eaten eggs and sausage from.  She put them in the little tin sink, along with two coffee cups.  She pumped the sink full of water.

Then, unable to do more, went into the narrow bedroom at the back of the house.  She sat down on the bed.  “Albert,” she said once.

Then she laid down.  It was past sunset before she stopped crying.

When Penelope got up the next morning, she found Albert’s letter, still on the table.  She read it one more time.  Then she put the letter back in the envelope.  From a high shelf, she took down an old cigar box.  In it were her few important papers:  The deed to her property, her marriage license, her late husband’s death certificate.  She put Albert’s letter in the box, closed it, and put it back on the shelf.

Her dog came up to her and whined softly.  Outside, she could hear the chickens complaining.  She sighed.  The stock had to be fed.  She had to look after her garden.  Life had to go on, regardless of how she felt.  She went outside.  The dog followed her, tail wagging.

On his way through Fort McKay, Ted stopped again at the general store.  The old Indian was still standing behind the counter.  He raised an eyebrow in query as Ted walked in.

“How is Penelope?” the old man asked.  “How did she take the news?”

“As well as you could expect, I suppose.  She’s a strong woman.”

“She is that.”  The old man pulled a carton of Players from under the counter.  “You did a good thing, coming all this way.  Albert would have been happy you did.  Keeping a promise is always good.”

“How could I have done anything else?”

“Yes.  Please, take this.”  He handed Ted the carton of cigarettes.  “I’m sure Penelope was grateful to you.  But I am, as well.  Her dead husband was my son.  I can not do much to thank you, but I can do this.” 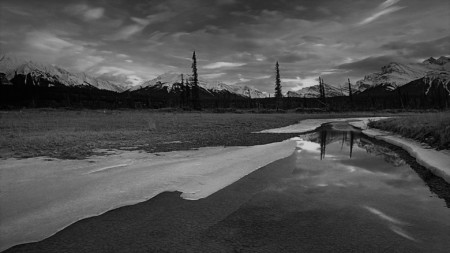 “Will you be coming back this way?”

“Then take my thanks with you.  Live in peace.  I think you have seen enough trouble to last you a lifetime.”

“Something to that, I think.”  Ted turned and left.

As he put the car back on the road headed south (the constant clanking of tracks, the smell of the tank turret, burnt powder, oil, mothballs and sweat) he looked to the right.  For a moment, he thought he could make out his friend:  The broken nose, the shining black eyes, the grin showing yellow, crooked teeth.

He shifted up as the car picked up speed.  I should be in Edmonton by tomorrow night.

The old Canadian car rattled away to the south, leaving only a trail of dust behind.

So, if you’re travelin’ in the north country fair

Where the winds hit heavy on the borderline

Remember me to one who lives there

She once was a true love of mine