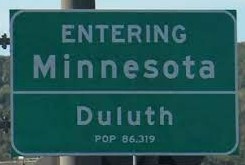 Welcome to Duluth, Minnesota!  This has been my home for the last 15 years.  There is much to love about my city, and also a few things to dislike.

Duluth is Minnesota’s fourth largest city (population 86k).  Duluth is the westernmost freshwater port in the United States. Iron ore from the Mesabi Range, coal from the western United States, and grain from the Red River valley go out.  Limestone, cement, salt, and ginormous windmill blades come in.  Lake Superior is the largest freshwater lake in the world (by surface area, 31,700 square miles).  It is known locally as the Unsalted Sea (Shark Free!).  Superior, Wisconsin is just across the bay (the only thing superior in Superior is the view – of Duluth)

Outside magazine once ranked Duluth the best town in America. 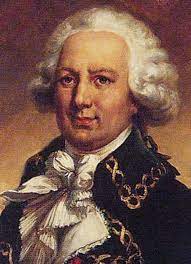 The area was visited in the 17th century by French voyageurs, including Daniel Greysolon, sieur DuLhut (or Du Luth), who claimed the area for France in 1679. The fur-trading post of Fond du Lac, on the St. Louis River, was active until the mid-19th century and was controlled by the Hudson’s Bay Company.

At one point, Duluth had the highest percentage of millionaires in the world. Timber barons, railroad owners, and steel magnates flocked here to do business and capture wealth.  Some of the houses they built are gorgeous, others are hideous. 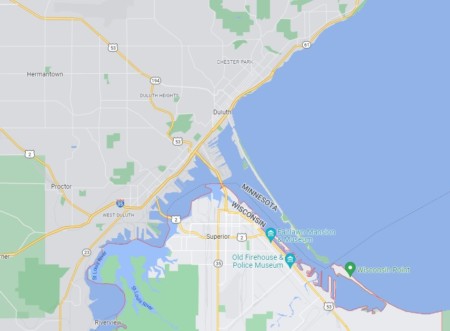 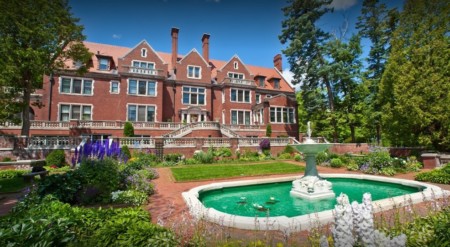 Glensheen Mansion is one of those beautiful houses.  It boasts 39 rooms (27,000 square foot) and is situated on 12 acres of prime Lake Superior shoreline.  Chester Congdon made his fortune in mining and started to build a beautiful house for his wife, Clara, in 1905.  Glensheen is also the site of the grisly murder of their daughter with a pillow and a candlestick in 1977. 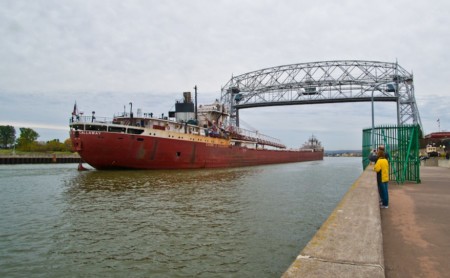 Canal Park .  I’ll just say it.  Canal Park is a tourist trap. Horse drawn carriages.  Scooter rentals. Ice cream vendors.  But it done have some redeeming qualities.  Watching a big thousand footer ship pass under the Aerial lift bridge is awesome.  Grandma’s Restaurant was a destination for us before we moved here.  There are all sorts of candy stores, clothing stores, hotels…anything a tourist (or local) could want.

Bentleyville Christmas Lights was started by Nathan Bentley in 2001 at his home.  It has grown steadily and now takes over Bayfront Park from November to December.  It is setup and dismantled yearly with mostly a volunteer crew.  It is “free” (the city subsidizes the park use and the electrical so not, technically, free for the taxslaves) to wander around under millions of Christmas lights.

Every year in August, Bayfront Park is home to the Bayfront Blues Festival .

Great Lakes Aquarium is the only all-freshwater aquarium in the United States. 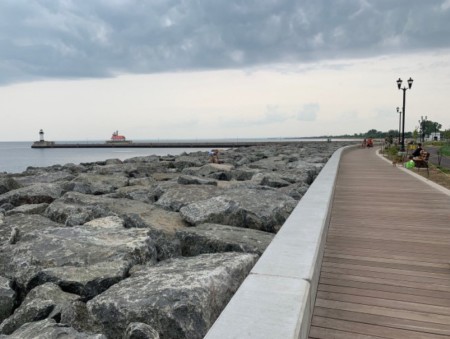 The Lakewalk is an 8 mile long paved/wood decked walking and biking path from Canal Park to Brighton Beach along the shore.

If Lake Superior fishing is your thing, there are several guides who will take you out on the lake in their boats.

Spirit Mountain is, during winter, a ski hill.  During the summer it is an adventure park with an alpine coaster and a seated zip line.  Year round, it is a goddamned drain on the taxpaying citizens. 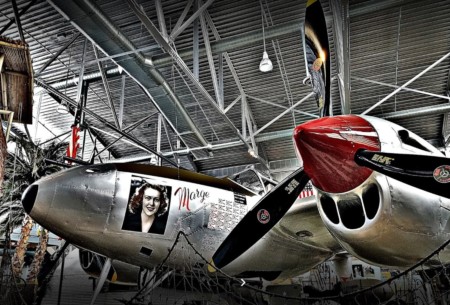 Richard I. Bong Veterans Historical Center, across the bay, in Superior, features a variety of well-preserved military vehicles including a fully-restored P-38 Lightning fighter plane   Dick Bong (heh, heh)  was one of the most decorated fighter pilots of World War Two.

My current favorite restaurant is Tavern on the Hill. The Cioppino stew is pretty damn good.  Their cheese curds are to die for.

The Anchor Bar in Superior is consistently ranked #1 in the area for their burgers.  My favorite is the olive burger.  Prices are cheap.  The place is busy at all hours.  Expect to wait for an open table.  The ambiance is…eclectic.  What ever you do, don’t look in the kitchen.

The Pickwick is a charcoal grill steakhouse.  My favorite here is the grilled tenderloin.  Second favorite is the deep-fried pepper cheeseburger.

Duluth Grill is a former Ember’s restaurant that went rogue.  They are no longer affiliated with Ember’s, instead they do their own thing.  The BiBimBap, the Korean Brussle Sprouts (yes, seriously!), and the Scotch Eggs are excellent.

Grandma’s is a former boarding house (possibly even a brothel house?) turned into a restaurant.  It is located right next to the Aerial Lift Bridge.  Try the Steak Cheese French or the Chicken Wild Rice soup.

Vanilla Bean‘s steak fries are the best I have ever had.  Crispy on the outside yet creamy on the inside.  This is a popular brunch spot so be prepared to wait, especially on the weekends.

The Juice Pharm and Grill  is a vegan juice bar and café.  I am an avowed carnivore, but this place has great food!  The Walnut Chorizo in their Mexicali tacos is particularly delicious.  They even make their own tortillas.

Ravin crossbows makes the Cadillacs of crossbows.  I am amazed at the range and accuracy of mine.   Also the power: 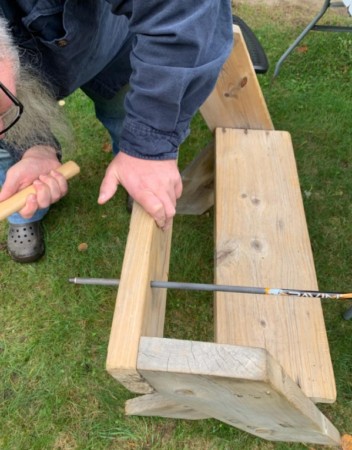 Yes, I hunt wild benches in my Crocs. It took a good 15 minutes to get my arrow out.  Then I adjusted my scope.

Aerostitch is known throughout the cycling community for their high quality motorcycle riding suits and gear.

Duluth Trading Company makes high quality clothing for men and women.  I am a big fan of their long-tailed pocket t-shirts.

Genesis makes massive grippers and shears for attaching to excavator arms.  They are used worldwide for demolition of bridges and buildings.

Cirrus Aircraft  is the only aircraft manufacturer that builds a full airframe parachute into their airplanes.

Duluth is the birthplace of iconic folk singer, Bob Dylan.  He grew up just north of here in a mining town called Hibbing.    He pretty much disowns either city.

Trampled by Turtles is a bluegrass influenced folk band who enjoyed a good deal of success starting in 2010.  They are still pumping out albums and touring.

My favorite local band, Dedric Clark and the Social Animals (formerly Diet Folk)  isn’t even local anymore.  They moved to Nashville in hopes of making it big.

The not-so-lovable parts of Duluth:

Politically, the residents of Duluth are overwhelmingly True Blue Democrats.  Recently, the single conservative on the city council got frustrated and quit.  The city council has forbidden the sale of menthol cigarettes and has mandated that all businesses charge for plastic bags.  They spend ridiculous amounts of money bailing out Spirit Mountain ski hill or rebuilding the Lakewalk after a storm.

City streets are horrible.  The potholes remind me of those in third world countries.  City streets are sometimes plowed in a timely manner, sometimes not.  Many mornings, I would have to snow blow my 1/8 mile long alley just so I could get to work.  Every car my family owns has all wheel drive because of this.

Taxes are high. Infrastructure is crumbling. The sewer system overflows during heavy rains and dumps raw sewage into Lake Superior. At least one water main bursts every winter.  Drugs and homelessness (even in the winter) are problems.  But the city has lots of money to design a new city flag and to fund a wet house for alcoholics (free liquor! I’m thinking about applying) or to buy the downtown strip club and restore it to a movie house.

Duluth winters are brutal and long.  We usually get our first snowfall in late October/early November.  The last snowfall is usually in late March (right around high school hockey state tournament time).  Hockey is a big deal here.

But summer, summer is divine.

Next time, join me for a drive up the North Shore. 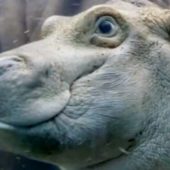