Good thing to have a full moon.  Penny was right, lots easier to see. 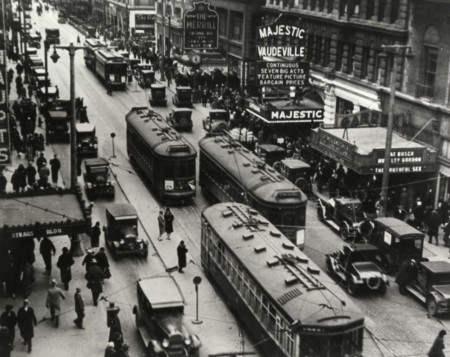 Penny had insisted on waiting for the two weeks she and Ad had spent in a small town outside of Milwaukee, in the cheapest of a line of cheap motels they had stayed in since Ad had walked out of McAlester, two months earlier.  But the wait for the full moon, Ad had to admit, had been worthwhile.

Ad and Penny were crouched behind a low hedge.  In front of them wasn’t a house, but a mansion, a huge, white, three-story structure with a long, paved driveway that delivered autos to a parking area just in front of the main doors.  A big garage was visible to the left rear, and on the other side was a stable, now apparently empty.

The Szabo brothers were crouched behind Ad and Penny.  The four had driven to the mansion in the brother’s Packard, which was parked a half-mile down a lonely stretch of road.  The lights of Milwaukee illuminated the sky to the east.  No lights were on in the mansion.

“OK,” Penny whispered.  She opened the 12-gauge double, checked the shells in both chambers.  “Just like we planned.  Let’s go.”

Ad led the way, bounding over the hedge and running up the driveway, the heavy Thompson in both hands.  He had removed the buttstock to make it easier to handle, but it still felt heavy as a cinder block, especially with the big drum carrying 100 .45 caliber rounds attached.  Penny followed, with the Hungarian brothers bringing up the rear.

It seemed to take hours, running in the dark, to get to the front doors.  Penny produced a key – another bit of help provided by her cousin – and opened the big double doors.

“Up those big stairs,” she whispered, pointing out a grand staircase just ahead.  “To the right, down to the end of the hallway, big doors on the left.  That’s his bedroom.”

Ad led the way, the short ugly nozzle of the Thompson preceding him.  He crashed through the bedroom doors.  Penny followed him in, the Hungarians close on her heels.

“GET UP, GET UP, GET UP” Ad shouted.  A lamp on the bedside table came on and there he was, an old man, bearded, wide-eyed, bewildered, sitting up in a big four-poster bed.

Ad grabbed the sleeve of the old man’s nightshirt and stuck the muzzle of the Thompson in his face.  “You’ve got a big stash of cash here, don’t you?  Oh, don’t shake your head at me, we know you do.  In the attic.  Show us.  NOW!”

Ad stepped back so the old man could get up.  As he turned and levered himself up off the mattress, his body passed in front of his left hand, so nobody saw the small black button on the nightstand or noticed the quick stab of a forefinger to set off the silent alarm.

The old man led them into the hall, down to the other end of the house.  He opened a narrow door, revealing a narrow set of stairs.  A switch was just inside; the old man flipped it, lighting the stairs dimly.  “This way,” he said.  “It’s up here.”

And it was, just as Penny had described; under a couple of loose boards, a metal strongbox padlocked shut.  The Hungarians carried it back down to the second-floor hallway, where Penny escorted the old man back to his bedroom, shotgun stuck in the small of his back, to retrieve the key.

She opened the box.  It was full of currency:  Twenty, fifty and hundred-dollar bills in bundles and gold and silver coins.  Penny looked at Ad, then at the Hungarians, all of them grinning widely.

“OK,” Ad said to the old man.  “You’re going with us to the front door.  Once we’re all outside, we’ll turn you loose.  Don’t try to follow us, see?”  He raised the Thompson for emphasis.  “You two,” he turned to the Szabo brothers, “bring the box.  I’ll lead the way.  You bring up the rear,” he nodded at Penny.  “If the old guy does anything funny, smash him over the head with that shotgun.”

The were halfway down the stairs when suddenly, startlingly, the entire great front room and the grand staircase was suddenly bathed in brilliant, dazzling, impossible light.

Ad stopped suddenly, stunned.  A tall, blocky man stood at the bottom of the staircase.  He was wearing a nightshirt, but in his hands – Ad recognized the piece, a Winchester Self-Loading rifle, like the ones the guards at McAlester sometimes carried.  It was a short, brutal piece, firing a heavy .40 caliber bullet, and as Ad watched, frozen and dazzled, the man shouldered the rifle and aimed.

Behind Ad, the old man dove down and to the right, hugging the staircase railing.  “SHOOT SHOOT SHOOT!” he shouted.

Ad brought the Thompson’s muzzle up.  He knew he wasn’t going to make it.  He watched the big man’s Winchester foreshorten and, as if in slow motion, flame spurted from the muzzle.  He heard a wet slap behind him, the thump of the strongbox falling, and one of the Hungarian twins fell down the stairs, part of his head shot away.

Ad aimed the Thompson, awkwardly with no shoulder stock.  He hit the trigger – nothing.  Dammit dammit the safety where the hell is the safety!  He felt for it, found it.  Another shot rang out from the Winchester, and the other Hungarian went down hard.

Ad pulled the Thompson’s trigger.  The gun let out a chattering roar, spraying slugs.  It was hard to manage, but Ad manage to wrestle the muzzle down and at what had to be the old man’s bodyguard.  The big man got off one more shot before he went down in the hail of .45 caliber bullets, and Ad, in horror, heard Penny’s screech of pain.

He turned.  Penny was sitting on a step, clenching her upper arm.  Both the Hungarians were obviously and messily dead, one with his head blown half-off, the other with a huge hole in his throat.

“Can you move?” Ad demanded.

“I can’t carry that box and this chopper.”  He opened the box, grabbed bundles of bills, and stuffed them in his pockets.  “That will have to do.”  He helped Penny to her feet.

The old man was still cowering at the railing.  In a fit of rage, Ad leveled the Thompson and put a burst into him.

Penny was able to move.  They made it back to the Szabo’s Packard; fortunately, they had the foresight to stash the keys on top of one of the back tires.  Ad slid in the driver’s seat and stepped on the starter.

“Head back to the hotel,” Penny gasped.  “We’ll get my car.  They may be looking for this one.”

“We should get you to a hospital,” Ad said.  He put the Packard in gear and stomped on the gas.

“No hospital.  Didn’t you see me bleeding all the way out the door?  They’ll know someone is hurt and got away.  I’ll be fine, it went clean through, just need a bandage and some rest.”

They made it to the hotel without incident, although several times they heard sirens in the near distance.  In their room, Ad tore strips off a bedsheet and bandaged Penny’s arm; the slug had passed through her bicep without hitting bone.  “I think you’ll be all right,” he said.  “We’ll want to get some iodine on it as soon as we can.”

“Where should be go?”

“You could have left me there,” Penny said as Ad was grabbing small clothes and socks out of a dresser drawer and stuffing them in his old suitcase.  “You weren’t bleeding.  They may have thought the Szabos and me were the only ones there.”

“And you wouldn’t have told them?”

“Running is one thing.  But squealing?  Something else.  Do we have any booze?  Fuck this arm hurts.”

Ad found a bottle of whiskey and handed it to her.  “Anyway, no, I wasn’t going to run then, and I’m not going to bail on you now.  No matter what road we take now, I’m sticking with you to the end.”

Penny forced a painful smile.  “Why?”

Ad thought for a moment.  “Why?  Well, I’m a-gonna tell you.  It’s because these past few weeks with you, I’ve felt more alive than I have, well, ever.  I don’t even think about you growing feathers on that last job anymore.  That’s all done past.  I’d rather end it alongside you than get away without you.  I guess, what I’m saying is, we’re in this together now.  To the end.  Like I said.”

“Yeah.  That’s probably a hell of a good idea.”

Well the moon gives light and shines by night

And I scarcely feel the glow

We learn to live and then we forgive

Or the road we’re bound to go

More frailer than the flowers, these precious hours

That keep us so tightly bound

You come to my eyes like a vision from the skies