Last week was a discussion outlining the problems with the Colorado River Compact.  Today we try to do the hard part:  find a solution instead of pissing downstream to spite your enemies.

This is my review of Fate Brewing Shot in the Arm Barrel Aged Imperial Stout: 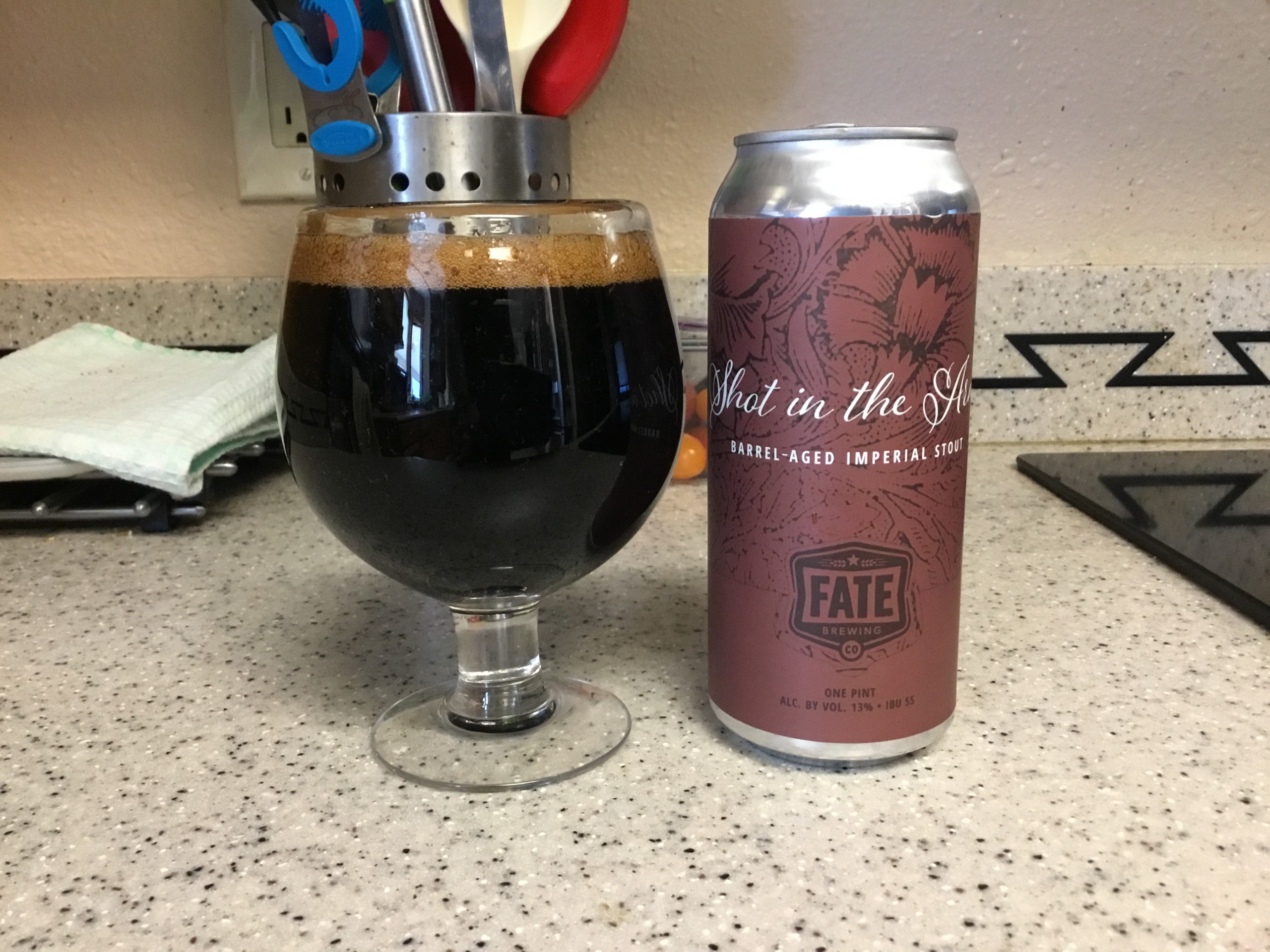 It will be mass chaos when the river will runs dry! We’re all gonna die!

While the 1934 Parker Dam Water War is where we began, it should be noted there was no loss of life that resulted from Gov. Moeur declaring war on California. The conventional wisdom is neighboring factions will inevitably resort to violence to preserve their possession of valuable resources.  In the case of water mismanagement, others have identified instances in the recent past where this was not the result.  Furthermore, in his book Enlightenment Now, Steven Pinker of Harvard University devotes an entire chapter of his book making a convincing argument armed conflicts are on the decline.  While he specifically cites reasons such as the increased lethality of conventional militaries, ultimately the reason for the decline in conflict is parties that engage in trade are unlikely to go to war.

This is in line with the axiom often attributed (although there is no evidence he said it at all) to Frédérique Bastiat: when goods do not cross borders, armies will.   If the AZLP is to have a coherent policy in place on this issue, the simple fact it is entirely within reason to believe cooler heads can prevail should be its foundation.

But you cannot create water in a desert

This is absolutely true, otherwise it would not be a desert. It does not mean that no water exists to be distributed in as efficient manner as possible.  The controls put in place by the State and Federal Government simply need to be removed and allow water resources be subject to market forces.

You want businesses to SELL water? 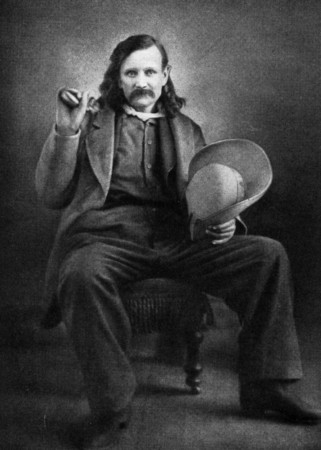 Yes, and it is hardly without precedent.  The City of Phoenix was founded in part because the Swilling Irrigating and Canal Company reused the canals the Hohokam Indians originally built and quite literally sold water to farmers and ranchers that later settled the area.

Water is a commodity like any other.  It’s value is determined by a simple relationship of supply and demand. But how does one allow that?  First, understand the Federal Government can do little to help

Even though Acts of Congress primarily funded and built the existing infrastructure, there is little reason to believe the current political discourse will change anytime soon.  This means any attempt by a congressional majority to tackle this issue will be wrapped up in an omnibus spending bill, ultimately kneecapped by the minority party over political issues that have little to do with water issues affecting a few states.  Even bills that do become law will be subject to the same political chicanery that allows for rent seeking, bureaucratic inertia, and government bloat to slow down progress.

The states affected will simply have to go at this alone, but it does have one unique advantage:  it complicates the Federal Government’s stake if they cannot simply override rights retained by the states.  Furthermore, many with interests in defending their property rights will have an easier time doing so within their own state, rather then using the Federal Courts system where the process is punishment unto itself.

There is however, one facet where the Federal Government can assist:  Ending agricultural subsidies.

This is a serious proposition.  Many identified agricultural subsidies as being a part of the problem.  While the easy scapegoat for agricultural decadence in the region is almonds, other cash crops grown in the region have a larger impact on water resources:

A majority of the water used by farms — and thus much of the river — goes to growing nonessential crops like alfalfa and other grasses that feed cattle for meat production. Much of those grasses are also exported to feed animals in the Middle East and Asia.

Alfalfa subsidies raise a lot of questions beyond water.  Then, there is cotton:

Lustgarten says conservation and increased efficiency in farming could reintroduce enormous quantities of water back into the Colorado River system. By Lustgarten’s estimate, if Arizona farmers switched from growing cotton to growing wheat, it would save enough water to supply about 1.4 million people with water each year.

Cotton subsidies do not amount to a mere pittance for Arizona farmers.  Ending the subsidy would force them to realign their financial incentives to grow something that could be more profitable had that subsidy not been available in the first place.  Is this politically feasible?  Perhaps not for every subsidy like corn, but Arizona natives tend to be more contrarian than their peers in other states.  As such, many farmers and ranchers do not collect much of a subsidy, if at all.  The preference when given the choice between a subsidy and water rights would rather retain water rights available on their property for their own purposes.  Thus reverting to traditional water rights as an extension of property rights. 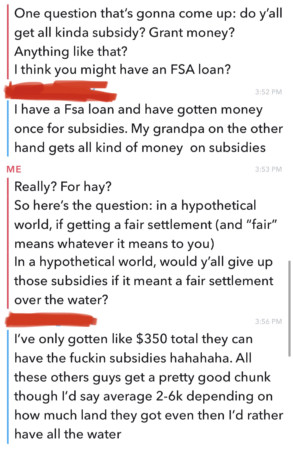 This will first require states and local governments to reassert jurisdictional authority.  How that is then put into practice would depend on the local authorities, who are more easily held accountable by the local population.  It might mean agreements such as the Globe Equity Degree, which governs usage in Eastern Arizona based on a first in time, first in right basis would become more prevalent along various river basins.  This could be viewed as a consequence of removing agricultural subsidies in that free taxpayer money comes with strings attached—demanding the strings be removed means no free money.  It would also end the special statuses interest groups that receive legal backing from the Federal Government, such as Indian Reservations.  Under the Globe Equity Degree for example, the Gila River Indian Community does not tie their water use to pre-enabling act maps, a constant legal battle that continues to this day.

This is not to imply Indian Reservations should not have any water rights, only they must operate under the same set of recognized water rights as an extension of property rights as everyone else in the region.

If they retained water rights, there wouldn’t be any for millions living in cities?

Not necessarily.  The current system of allocation acts as nothing more than a price control on water resources.  Few topics in economics have the sort of agreement across economic philosophies that government policies dictating price controls, inevitably result in shortages:

Prices inform everyone about consumer needs, how much they are willing to pay for it, while at times of high uncertainty discouraging hoarding. The very existence of profits tends in the long run to bring prices down because they give incentives to the entrepreneurs to produce more of it which will increase supply and may even reduce costs due to economics of scale. On the other hand, price controls or anti-gouging laws discourage innovation and sometimes can lead to supplies of goods and services being directed to foreign markets where these controls don’t apply, the very basic economic law of supply and demand explains that if you artificially suppress rising prices, you will get less supply. Imperfections in the price system do not justify the need to control it by central planners.

Controlling the price of water to be a mere afterthought coupled with subsidies ultimately leads to the perverse incentive to use more water than is really needed by remarkably few people.

Nowhere is that more true than the Imperial Valley, a sun-baked desert in California’s southeastern corner where around 500 landowning families use Colorado River water to grow much of the country’s winter vegetables.

In terms of water, the valley is especially important because the Imperial Irrigation District holds a right to an astounding 3.1 million acre-feet of the Colorado River’s annual flow. That’s roughly 20% of all the river’s water allocated across seven western states. It’s about two-thirds of California’s stake in the Colorado, and as much as Arizona and Nevada receive combined.

The amount of water used by a single urban dweller over the course of a year is a drop in the bucket compared to a farmer growing a subsidized crop.  By subjecting water usage to market forces, the water rights currently retained by those 500 landowners could simply be sold at a premium to a buyer that needs it, rather than growing resource intensive crops IF the market incentivizes them to do so.

What if the market forces do not incentivize property owners to sell water to cities?

A free market approach in this case would be to allow enterprising entrepreneurs and industrialists to build water infrastructure for local municipal use.  One example given is the Carlsbad Desalination Plant outside San Diego:

The plant produces 56,000 acre-feet of clean water per year, which means a total of nine such facilities could offset the proposed 2022 allocation cuts from the Colorado River. How feasible is this? No new technology is needed to deploy a fleet of reverse osmosis (RO) water factories where they are most needed – this challenge is largely a political one.

Granted, building anything in California is a difficult, time consuming legal process given their laws regulating environmental impact as well as simple NIMBYism.  Compared to every other state in the Colorado River Basin—they are the only ones with this option.  Other states can get creative as well.  For example, one project in Phoenix is currently underway, that seeks to offset future reductions in Colorado River allocations with water resources from within Arizona.

It is possible, but the technology is getting better to mitigate adverse environmental impacts.  There is also the thought experiment of going to the kitchen sink in the middle of the summer and finding there is nothing coming out of the tap.  Would that not change how one views such environmental impacts? 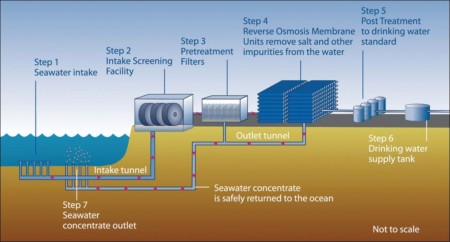 This is not a summer beer…but lucky for me we are currently experiencing  cooler weather than normal here in AZ.   This one is from a relatively new brewery in Tempe that uses bourbon barrels.  Which barrels?  From what I can find its either Dickel or Old Forester so if you are into whiskey that won’t necessarily impress your friends this is defined for you.  Quite frankly who among us isn’t into whiskey that won’t necessarily impress your friends?  It pours thick, with some carbonation, but that might just be trapped by high viscosity. 13%ABV; 55 IBU.  Please remember to operate heavy machinery at the level of risk you are willing to tolerate. Fate Brewing Shot in the Arm Barrel Aged Imperial Stout:  4.4/5