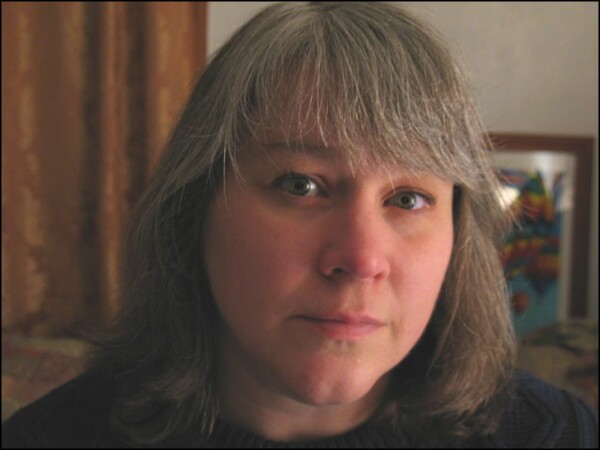 SP when we first met, 15 years ago. Those clear gray eyes devastated me.

OMWC: Monday, at 4:59 PM, our beloved SP breathed her last. She was peaceful, relieved of the pain, and bathed in the love of her wonderful daughter and me. It was in the same hospital where she was born. The medical staff was crying as much as we were; we all knew how this was going to end, but that doesn’t help when it does. The recent time we’ve had with her was a miracle – the particular cancer which took her away from us is so virulent that average time from onset of symptoms to death is about a week. She was so strong and so determined that we managed to get over three months of life together. Not anything close to what we wanted, but nonetheless a blessing.

SP could do all those things and more – she could literally create community, bathe others in a magical radiated love and calm, and bring out happiness and contentment in everyone around her. SP had a unique talent of disarming people and putting them at ease: “People tell me everything.” And they did. And she always kept their confidences.

In her professional life, she was a paramedic/EMT, a COO, a CFO, an accomplished musician and visual artist, a photographer, a skilled coder and developer, a published poet, and a teacher. She could wire a house, run finances, bake bread, sew clothing, grow and can vegetables, dig gardens, save lives. “I’m not unfocused, I’m multifaceted.” This website is part of it – we’ve been in a friends chat group for a decade or so, and whose nucleus was some of the regulars from the old Hit & Run. When we lamented that we hadn’t left Reason, Reason had left us, she naively said, “Well, I could whip together a new site for you in a day or so…” And here we are.

In our real life, I was a restless and itinerant person, which suits my profession. But we came to a point where we wanted to stop moving, find a place that suited us, and live our life the way we built it, very self-contained and centered on each other. And we found it, back where she started. We knew that we’d live the rest of our life here, and in the end we did. SP figured out how to pull it off and she made it happen with sheer will and determination.

She wanted you to know that her last words were, “I have information that will lead to the arrest and conviction of Hillary Clinton.”

WebDom: I wish I knew where to begin, but words are wholly insufficient to encapsulate a woman as amazing and boundless as SP, though OMWC has come close.

There are so many things about my mother you already know: her boundless kindness for others, her ability to do anything she set her mind to, and her ability to see the good in others, even (perhaps especially) when they didn’t see it themselves. She had the gift of believing in everyone more than they believed in themselves, and she had the power to unlock their potential.

But there are other facets to SP that may not have risen to the surface overtly within the Glibertarian community.

SP was a Quaker who never judged others for their spiritual beliefs. She always held space for others to express their own spirituality, and she would always support them in exploring and strengthening their spiritual practices. I was a young child when she taught me the importance of seeking God (the universal consciousness, as she sometimes put it) in everyone. SP believed — barring few truly evil exceptions — that everyone possessed a little bit of God deep within them, and it was her daily endeavour to find it and nurture it. It didn’t always work, but she did her level best.

When I was a child she first introduced me to meditation through Quaker meeting. She showed me the importance of quietude for it is in the silence that your soul speaks. I was in my early teens when she introduced me to Qigong as a form of energy working. She taught me about the power of the mind to overcome physical challenges and how to align your body and mind. It is this alignment that kept her going through the cancer battle that, by all accounts, should’ve taken her from us long before it did.

Mom had a deep reverence for nature, and also had a deep spiritual connection with nature. Nature, in all of its magnificence and mayhem, was an expression of God and the cosmos. SP had a knack for finding tree spirits in the wild, and would continually communicate with plant spirits and the animals that would cross her path. Her love for nature was nearly matched by her disdain for injustice, intolerance, cilantro, and small talk.

There is so much more to SP than I can possibly share in this post. She was a diverse, talented, and eclectic person with loves and interests that included American Indian history, British murder mysteries, Great Pyrs, pizza, baking, herbs, tomatoes, ravens, and signs and portent.

As introverted and reclusive as she was, she did truly love the Glibertarian community and what it had evolved into. She was continually impressed by how brilliant, accomplished, kind, and worldly Glibs are. She felt at home here. She felt as though she accomplished something, and even though she withdrew over the last year due to life’s turbulence, she passed with the knowledge that Glibertarians.com was going to be part of her legacy. While we wouldn’t be here now without her, she wouldn’t have had this if it weren’t for all of you.

OMWC and I will always be grateful that Mom found her tribe.

OMWC and WebDom: And here’s SPs favorite song, which, in a fit of cosmic irony, was actually written for a friend of Mulvey’s who was dying of cancer. Like SP, it’s a piece of beautiful lyric poetry.