A Glibertarians Exclusive – Too Many Goodbyes V

A Glibertarians Exclusive – Too Many Goodbyes V

Sally Braxton looked up from her book as her eighteen-year-old son George burst into the living room.  “Mom,” George Braxton said to his mother, “I’ve done it!”

Sally sat in her favorite chair, in the small living room of her small house in the small town of Zanesville, Ohio, where she had moved after leaving the Navy in 1946.  She was still bemused, sometimes, as to how a girl from New Bedford had ended up in this small town in the Appalachian foothills, but here she was, Chief Nurse of the little local community hospital – with George, her son, all she had left of her brief marriage to Commander Tom Braxton, now somewhere on the bottom of the Pacific with the USS Indianapolis. Long ago, before he boarded the Indianapolis and sailed into oblivion, he had told her of his grandparent’s farm in the area; maybe that was why she felt at home.

She had never remarried.  When asked why, she invariably replied, “Because I loved Tom.  If I remarried, I’d be forever comparing my second husband to him.  That wouldn’t be fair to him, to me, or to Tom.”

Her son’s announcement provoked some concern.  “Why?” she asked.

“It was Dad’s life, wasn’t it?  And you were in the Navy, too.  I want to do this.  It’s the only thing I can do to get to know a little about what my father’s life was like.”

“Well, your Dad was an Annapolis man.”  She smiled at her son, who looked so achingly like the father he’d never known.  “I’m sure you’ll find being a regular sailor quite a bit different than what he went through.”

“Even so,” George said, “I’ll still be in the Navy.  Sooner or later, we’re going to be facing the Russians.  Everybody says so.”  Sally mentally translated “everybody says so” from teen-speak to English as “a couple of people I like say so.”  “Besides,” George went on, “it beats waiting around to get drafted.  I’d sooner spend some time in the Navy than the Army.”

Sally remembered something she had seen on the news about the Army sending “advisors” to Indochina – no, they were calling it Vietnam now.  She nodded.  “Yes, I’d rather you were in the Navy than the Army.  When do you have to report?” 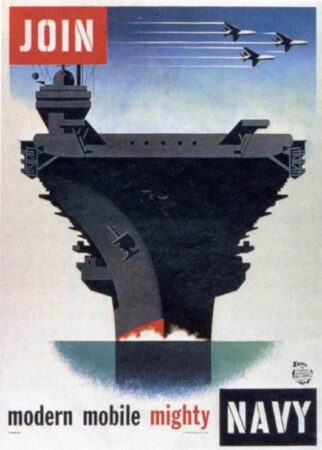 “Day after tomorrow.  I have to catch a bus; I’ll report to the Great Lakes Training Center.  After that, who knows?”

“Well, all right.  I’m not working that day.  I’ll drive you to the bus station.”  She got up and hugged her tall, strong son, so achingly like his father.

George took that for approval.  “I’ve gotta go tell the guys.  Later, Mom!”  He rushed out, leaving Sally bemused and a little apprehensive.

Sally put down her book.  She looked around her living room, the front room of the little house she had raised George in, alone.

Soon I’ll be alone here, she thought.  Alone again.  George is going to go away, like his father did, so many times.  One more goodbye.

“Well,” she said to herself, “it’s not like I didn’t know it was going to happen.  Kids grow up.”

She went out through the kitchen, to the back of the house, where there was a small deck with a round table and two chairs.  Sally sat in one of the chairs, facing the huge white oak that dominated her back yard.  A robin was singing in the top of the oak.  A few sparrows were foraging in the row of bushes along the edge of the yard.

And now he wants to be a sailor, Tom.  No Academy ring for him, he just rushed out and signed up.  He should be OK, though.  Our war, the Second World War, there surely won’t be another war like that, not again.

She paused in her line of thought.  The robin was still singing.  Somehow, she never felt that she was talking to herself in these internal soliloquies; she felt that Tom was, somehow, listening.  In some ways Tom felt like a distant memory, but in others, not.  Sally could still hear his infectious laugh, could still smell his shaving soap, could remember his big hands, his Annapolis class ring.

I wonder, she thought, which one of us really left the other behind.  My folks, your folks, they’re all sure that you’re in Heaven, waiting for me to come join you.  I wonder about that.  Would the God we learned about in Sunday school allow something like Okinawa to happen?  Or Iwo Jima?

I know what you’d say.  You’d smile that crooked smile and tell me I should get hold of myself.  You went out doing your job, serving on a ship in the Navy you loved.  That there are worse ways to go.  But Tom, oh, Tom, how lonely it’s been without you.

I remember the year after the war ended.  Did I ever tell you, Tom, that I went back to Honolulu, back to Pearl Harbor?  My old apartment building was still there on the Ala Wai Canal.  I found the spot we stood under the koa trees where you proposed.  It was as though I could feel you there with me.  When I came back to the States I stopped in San Francisco, where I had resigned my commission when the war ended.  The Old Knoll Navy Hospital was still there, but most of the wounded men have been moved on.  Not much happening there in 1946, just a few sailors and Marines still being treated.

I went to Ashtabula, saw your parents.  How odd it was to meet them for the first time, without you there.  But a piece of you was there, and I think it made it easier on your parents knowing that I was carrying George, even then, and that something of you would go on.

And now George has joined the Navy.  It’s like something has come full circle.

George thinks I should let you go.  I’m not fifty yet.  I could start a new life.  Start over.  Find someone to spend my life with.  Let you go.

I’ve been so occupied with raising George.  It’s not easy, raising a boy without a father.  At least he has had his grandfathers for role models, and thankfully they’re good men.  But Tom, if only you could have been here.  If only he could have known his father.

But now George has joined the Navy.  He’ll be going away.  Like his father did, so many times.  Another goodbye.

Sally paused in her internal dialogue.  She looked up into the branches of the oak.  The robin was perched on the end of a branch; as she watched, he tipped back his head and pealed out another stream of song.

But I don’t want to let you go.  I can still see you.  I see your face in every cloud.  I hear your voice in the wind.  When the grass ripples in the summer breeze, like it’s doing right now, I can feel your breathing.  And most of all, I see you in our son, in George.

Just so you know, always, that no matter what comes up next for me, that I’ll always love you, more than anything in the world.

Sally felt like something had shifted, like some new chapter in her life was starting up.  She looked up into the oak.  The robin had flown away.

I’ll look for you in old Honolulu
San Francisco, Ashtabula
You’re gonna have to leave me now I know
But I’ll see you in the sky above
In the tall grass in the ones I love
You’re gonna make me lonesome when you go.