Hillbillys in a Haunted House 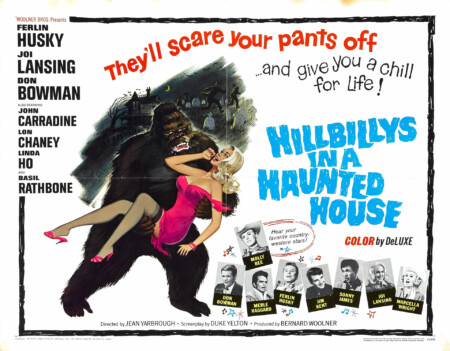 Notice the poster was already set, Ferlin is the lead, then down below in the pictures Merle Haggard has been hastily added. “He’s makin’ hits, boys!”

Hillbillys in a Haunted House

Professor R.J. here with some more trivia. What has Merle Haggard, Ferlin Husky, John Carradine, Lon Chaney Jr. and Basil Rathbone all in one movie? This one. And you may be asking yourself, why have I never heard of this thing? How could a film with such an ensemble cast be missed? The answer is, sadly, it is not missed. It is forgotten. This film was listed in several databases as one of the 50 worst movies of all time, which is a little harsh. Now I do agree that one should not attempt to watch this seriously. This is a movie to put on at parties in the background. Is there a plot? Loosely. Is the movie actually about an hour long, then it turns into a country western / hillbilly jamboree? Yes it does.

So why was this made, other than as a cash grab? I believe it was supposed to be a vehicle to popularize Ferlin Husky and country music in general. The idea was good. Get an all-star cast, hire the guy who wrote Abbott and Costello movies, borrow some spooky sets and surely you have a hit! Even the car is a star in this film! It is a legendary car made for Webb Pierce called the “Silver Dollar.” You will clearly see the guns glued all over the car – but I don’t think there is a clear shot of the interior, which is lined with silver dollars*. The car currently resides at the Nashville Country Music Hall of Fame should you ever wish to see it.

“Who the Hell is Ferlin Husky?”  some of you heathens might be saying. “Why isn’t Merle Haggard the lead?” This movie was made in 1967 – Merle had just three albums to his name when this was made. Ferlin, on the other hand, had eighteen albums! He had a greatest hits compilation already! And he was working on a Christmas album! I will say, all three of Merle’s albums at the time charted higher that any of Ferlin’s albums to that point. This accounts for Merle’s inclusion in the jamboree.

So enjoy this film for what it should be – a silly romp and a historical perspective on the country music scene in the 1960’s. Chances are you have never seen this, and may never see it again. It’s a piece of lost rockabilly culture.

So watch!  Or don’t! Everything is voluntary!  Next week, a surprise kung fu film – Shaolin Vs. Evil Dead!

*If you follow that link the video calls it the “Nudie Cadillac.” Nudie was a famous maker of western wear, it is not used as an adjective to describe the Cadillac here.