I’m not a person who is easily swayed by marketing, but there are exceptions. Like the fact that I’ve worn Old Spice ever since they employed Bruce Campbell as a spokesman. Another marketing campaign that I took to heart was the ‘Toys R Us Kid‘ campaign. Not that I shopped that much at Toys R Us, they were mostly out of my price range as a kid. No, I more took the mantra to heart. ‘I Don’t Wanna Grow Up! I’m A Toys R Us Kid!’ I’ve always enjoyed things that celebrated keeping the magic and wonder of childhood alive, as a kid Peter Pan was one of my favorite Disney movies.

As an adult when I visited Disney Land with some college friends the Peter Pan ride was still one of the best rides. I enjoy keeping a hold of this childish wonderment, not only as so many my age for pure nostalgia crack, but also so I can enjoy it with the next generation. I have no children of my own, but I 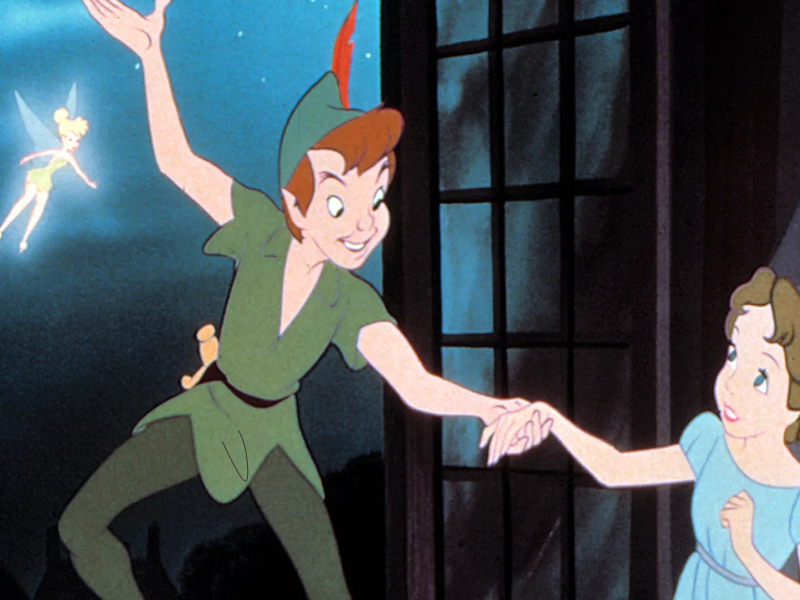 have nieces and nephews ranging in age from 2 to 22. I enjoy the joy they have when they come to visit me and play with all my old toys and getting to share with them toys and cartoons I enjoyed as a kid.

That is a very long winded way to get to the actual subject of this article, but hell, I’ve been drinking. A toy line and cartoon I loved as child was Transformers, you know, with Optimus Prime. It’s something I love that I’ve been able to share with these children. In 2003 Hasbro (the American company that marketed Transformers in the US) along with Takara (the Japanese company that originated the toys) released the first ever ‘Masterpiece’ figure. An 11 inch tall die-cast and plastic, fully articulated, and 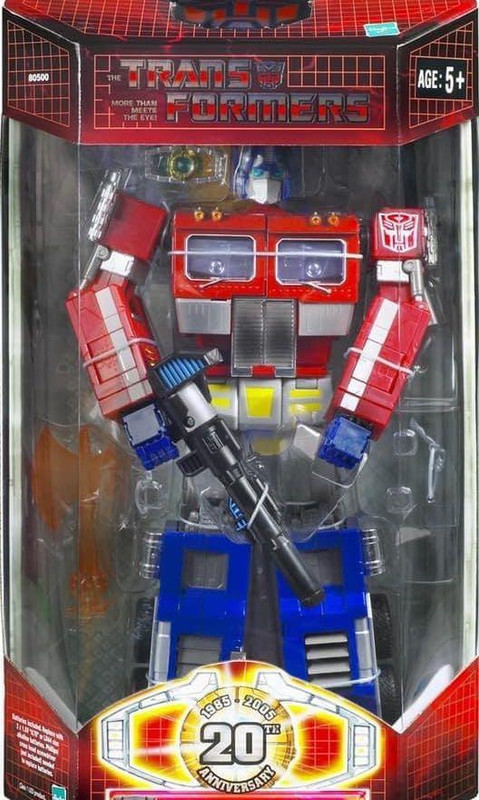 intricately detailed version of Optimus Prime (Pictured Right). I bought this figure, but not for myself. I gave it to my younger brother. At that time I liked Transformers as something from my youth, but I wasn’t as emotionally attached to it as I am now. That came later after I re-watched the series with one of my nieces.

When my younger brother was in college one of his friends began collecting the newer ‘Masterpiece’ figures they began releasing. At that time, I didn’t have a steady income (I’ll get to that in a sec) so I only admired his collection, I did not start one of my own. I only began my collection about 3 years ago when I finally began to have some disposable income.

An Issue of Scale and Style

The original ‘Masterpiece’ figure as stated was around 11 inches tall. The figures that followed didn’t stick to a strict scale for the characters. Characters that were supposed to be taller than others were shorter, those that should have been shorter were taller. And you know that agitated the nerds. So for the 10th figure they re-released Optimus Prime at just under 10 inches with new styling and engineering. All other releases were supposed to be in that smaller scale. Good. But should they be styled after the cartoon? The toy? A mix of both? They flipped and flopped between until the 44th figure, another re-issue of Optimus Prime, this time in a more cartoon accurate style with new engineering.

Buying For the Thrifty

When I finally got some disposable income I was raring to go, but THOSE PRICES! I may have some money now, but I’m still a penny pincher! This is where knock-offs come in. When I was a kid knock-off toys looked like a 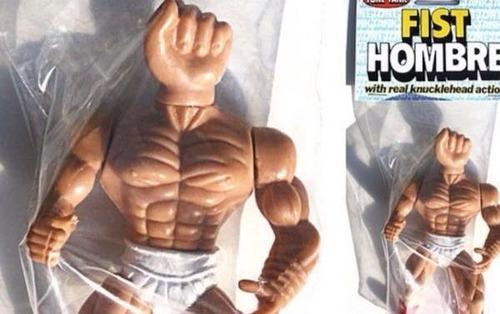 disfigured He-Man that belonged in a mental institution. But these days knock-offs of these high end toys are on par with good knock-off jewelry. One may never know the difference if they don’t know which difference to look for. They come in replica packaging. They use the same molds. In most cases, they actually improve the figure. Multiple first-run issues were never solved by Hasbro and Takara, they just milked the profits. But these fly-by-night knock-off companies address QC issues and sell it at a lower price point. In some cases, these knock-offs are entirely new engineering and better than the officially licensed product, or even figures of characters that were never given an official release. So, this is the route I have taken in my collection, for the most part.

The following is mixture of my ‘Masterpiece’ collection and some original releases of the toys from when I was a kid. A can of Hamm’s has been provided for scale (and drinking later).

Let’s start out with Optimus Prime, since he is the most recognized and I’ve mentioned him a lot. 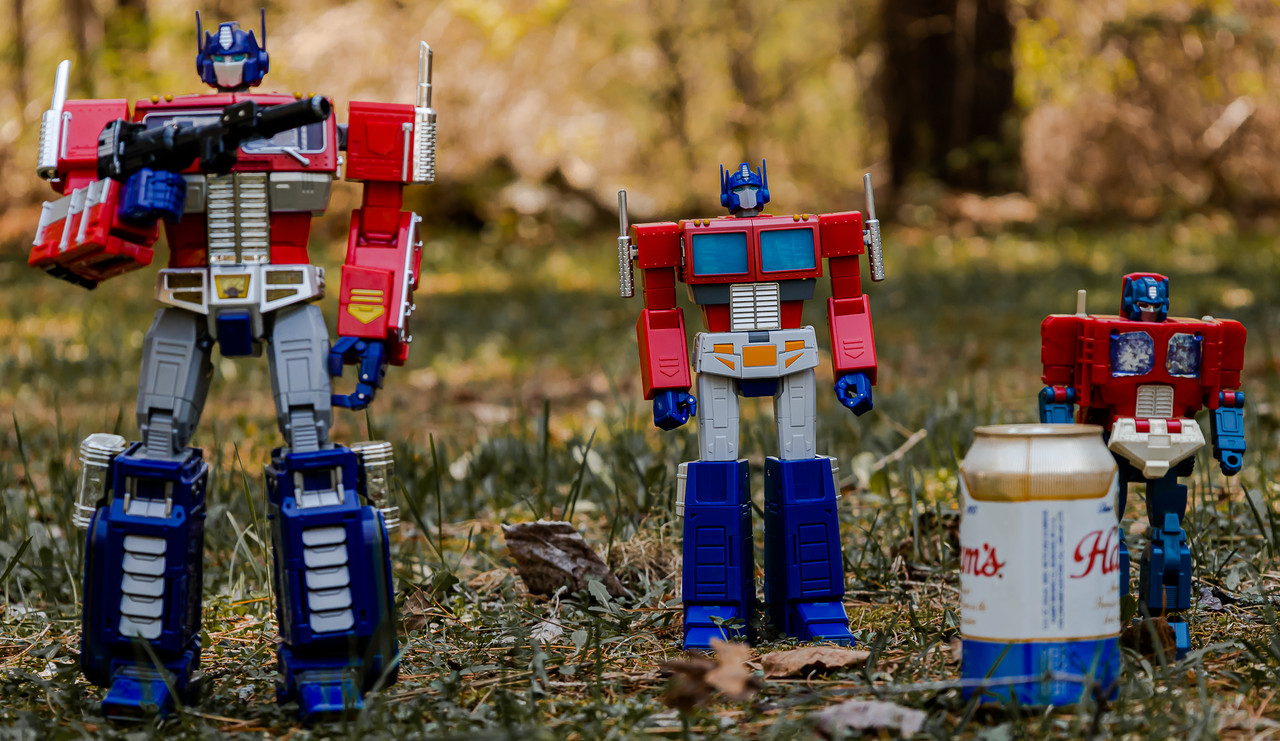 (From right to left: my original Power Master Optimus Prime (1988), TE-01 a knock-off in the smaller scale that looks more cartoon accurate than any official offerings, MPP-10 a knock-off of the 2nd ‘Masterpiece’ Prime scaled up to be about 12 inches (so bigger than the first one))

(The Dinobots. The only one of these that is an official release is Grimlock (the T-Rex) they have not released any of the others, so I got them as knock-offs) 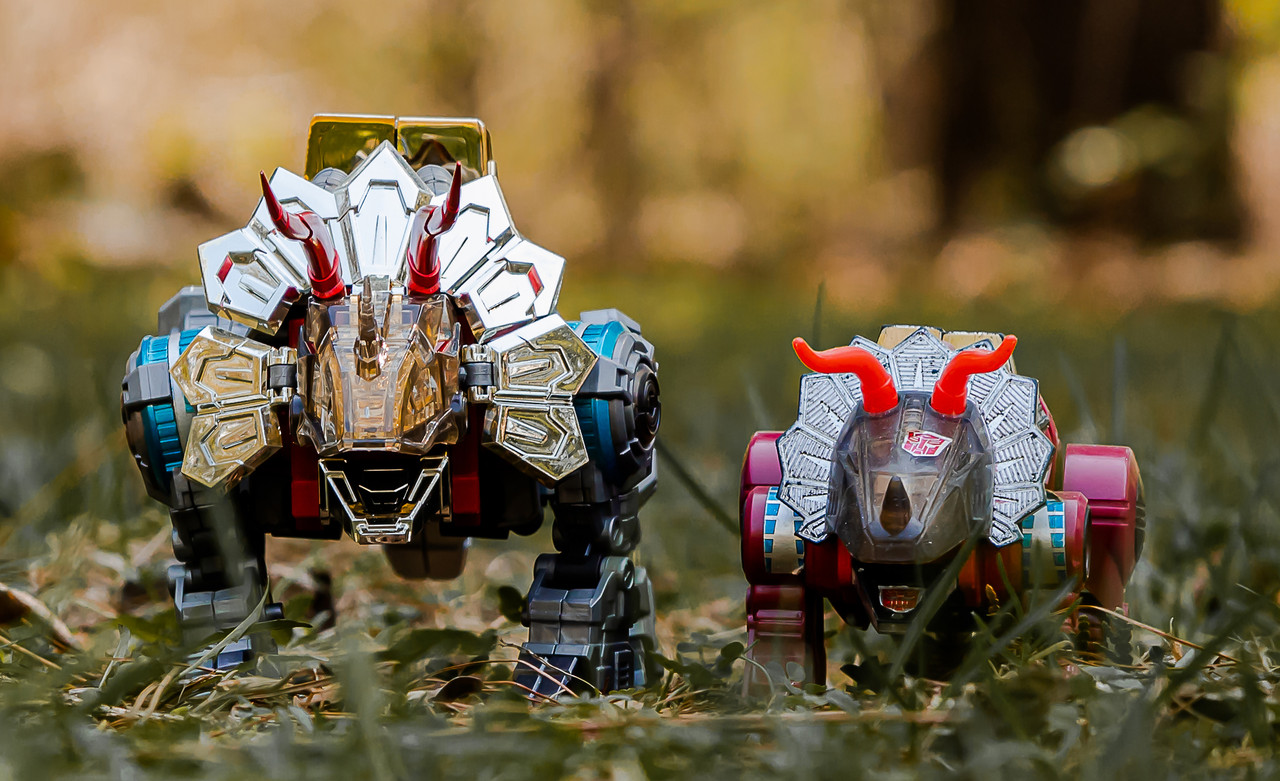 (Megatron, leader of the Decepticons (the bad guys) left to right: G2 Megatron (1992), knock-off replica in the new official ‘Masterpiece’ scale, fully re-engineered knock-off in the scale of my big Prime)

(The Seekers: (left to right) Skywarp, Starscream and Thundercracker. These are all exact copy knock-offs. QC problems fixed. Again these figures bring scale into question, as they are F-16s in alt-mode, but supposed to be shorter than Optimus Prime in robot mode. Which is bigger? A tractor trailer or an F-16? Of course in the cartoon they have mass-shifting…always a loop hole. Fucking govenm…er… animation!)

(Keg Party! Right to left: Iron Hide, Hamms, Optimus Prime, Hot Rod (nee Rodimus Prime) Megatron, Bumblebee, Soundwave, Wheeljack. I believe they are all knock-offs of some kind, but it can be hard to tell sometimes) 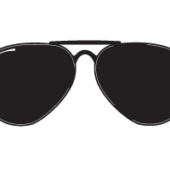