“You have no idea.  Charlie had been my best friend for fifteen years.  He was the guy I always knew I could count on.  Oh, he razzed me about Marissa, back in Sidi Bel Abbès, and I chaffed him right back.  That’s what old buddies do.  But he was a hell of a good man.  Better man never lived.”

Caleb Pettigrew stopped.  He coughed.  He pulled a tattered handkerchief out of one pocket and wiped his eyes, then poured out another glass of wine and gulped it down.  “Sorry, son,” he said.  “Charlie’s pretty near thirty years dead, and I still miss that damn dago, you know?”

“But what happened  next?  I mean, after that guy shot Charlie.  How the hell did you get out of that one?”

“She came for me,” Caleb said cryptically. 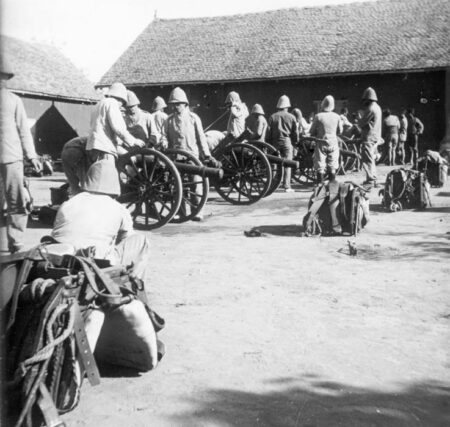 The bandits left Caleb Pettigrew alone after that.  They gave him no food or water, but left him lying in the dust, bound hand and foot, next to the cooling corpse of his old friend.  He lay there through the night, and well into the next morning, before Huy Phan finally approached him again.

“You have had some time to consider your position, I think,” the bandit chief said.  He squatted next to Caleb and held up his knife.  “You can be done with all this.  Just tell me…”

Phan was interrupted by one of his men, who came running up and spat out an incomprehensible stream of whatever the Tonkin people spoke.  Phan listened, then barked some orders.  The bandits roused, started grabbing weapons.  The Tonkin leader turned back to Caleb.

“There is a man,” the bandit said, “on a ridgeline, some ways to the south.  He is on a horse and appears to be looking at the village through a glass.  I will send some men that way.  Perhaps we can capture him.  Then, you will have company, yes?”

Caleb shrugged noncommittally.  I got a pretty good idea what’s going on, he said to himself, and it ain’t gonna be pretty.  He gave silent thanks that the bandits had left him and Charlie bound at the edge of the village and not near the morning fire, now burning in the center.  The wood-fueled fire sent up a plume of white smoke.  That’s going to be the aiming point, Caleb thought.

Three kilometers to the south, French regulars were wrestling three breech-loading 85mm field guns into position.  It took a few moments to place the guns; an officer on horseback, a few meters away on the ridgeline, shouted range and azimuth commands.  The artillerymen made their adjustments, loaded the guns, and yanked lanyards.

Caleb heard the whistling sound before the distant booms of the guns.  He rolled to face away from the village center, closed his eyes tight and opened his mouth just as the pattern of three exploding shells landed across the center of the village.

Screams rose above the thunder of the explosions.  Caleb felt himself picked up as though by a giant’s hand and slammed back down to the ground.  He looked around.  Beside him, the bandit leader was on his knees, shaking his head.

Caleb rolled.  Ignoring the protests from his muscles after the better part of a day in binding, he pushed off with his arms, kicked, and struck the bandit chieftain in the jaw with both feet.  Huy Phan fell to the ground, stunned further.  Caleb threw himself across the bandit leader, tossed his legs over the man’s head, and tightened his knees around the thug’s throat.  He squeezed.

Another pattern of three rounds crashed into the village.  This time Caleb managed to ignore the impact.  He gathered himself, tightened his grip on the bandit, pushed up on his elbows, and threw himself to the side, breaking Huy Phan’s neck.

He rolled again and looked around.  The ‘Golden Hand’, at least the ones who were not scattered in pieces or laying broken on the ground, were running into the forest.  Caleb scanned the ground nearby; sure enough, there was Huy Phan’s wicked little knife.  Caleb managed to roll, to get hold of the knife, and cut himself free.

The artillery seemed to have stopped.  Gotta get outta here, Caleb told himself.  Gotta head south.  That’s where that artillery came from.  A few paces away, a Gras rifle lay on the ground, and next to it, a cartridge box.  Caleb got to his feet, ignoring the cramping in his legs, and grabbed the rifle and ammunition.  He paused for a moment next to the body of the Spaniard.

He was greeted in a small clearing by French infantry, moving north.  With them:

The Canadian shook Caleb’s hand.  “Not on purpose, Sargent-Major.  I was fighting this big guy in what looked like black pajamas.  He knocked me for a loop, but when I came to, in the bushes a way off the trail, I was lying next to him, and my bayonet was in his chest.  No idea how that happened.  I could hear the Black Flag talking, so I laid low.  Presently I saw them carry you and the Sargent away to the north, so I snuck out to the south and caught up with the regulars, told them what happened, and led them back up this way.”

“Lucky all around, I guess.”

Paige looked around.  “Where’s the Sargent?”

A Captaine of the French regulars walked up.  “Sergant-Major,” he said, “If you please, your report.”

He spent some time detailing all that had happened to the Regular officer:  The position of the ambush, the location of the village – the officer had been the one directing the artillery, and so already had that information – and the composition of the bandit group.

“They aren’t Black Flag,” he concluded.  “Not anymore, anyway.  Just a very ambitious bunch of thieves.”

“Bon.”  The Captaine regarded Caleb critically.  “You look frightful, Sergant-Major.  Take your man Paige, he is to escort you to the south.  A kilometer, maybe two, you will find the baggage train.  There is a surgeon there.  Have him look you over, clean your wounds, and by my order, you are to rest there for no less than twenty-four hours.  Then, I will see you are retuned to your unit.  You are Foreign Legion, yes?”

“Today, Sergant-Major, I am certain the Legion is proud of you.  All of France is proud of you.  You found yourself in an impossible situation, and yet you escaped.  You now live to fight another day.  I extend my hand,” the officer said, and did so.

Caleb took the proffered hand and shook it.  “Thank you, sir.”  There didn’t seem to be anything else to say.

On the walk south, he said nothing.  Things seemed somehow different.  He couldn’t shake the image of Charlie, laying there in the dirt, a red round hole between his eyes.

Damn it, Charlie, he thought.  You had to go and die on me, you damn shifty dago.  You were the one man I could always depend on.  You always had my back.  Even more than Paul Allen back in the Army of Northern Virginia, more than that damned Englishman Smythe-Carstairs, more than anyone I ever knew.   I guess I got too used to having you around.

He remembered his arrival at Sidi Bel Abbès, on a hot, dusty morning.  He remembered being shown to a barracks and taking an empty cot next to an inert figure, snoring, and breathing out cognac fumes.  When the man finally roused, he looked up blearily at Caleb.  Caleb remembered it as though it were yesterday:

“Good morning,” he said.  He stood up, assumed the position of attention, and saluted.  “My name,” he said formally, “is Charles Sebastian Diego y Sanchez, and I am very, very drunk.”

“You damn dago,” Caleb breathed as he walked south. “I’d say damn you for leaving me alone, but I know what you’d say about that.  You’d say, ‘but you are not alone, amigo.  You have the Legion.’”

Now there’s a wall between us, somethin’ there’s been lost
I took too much for granted, got my signals crossed
Just to think that it all began on a long-forgotten morn
“Come in”, She said, “I’ll give you shelter from the storm”