In preparation for my upcoming shakedown trip, my dad and I attempted to set up the car to be towed by Vivian the Class C RV on a 2-wheel dolly.

Here’s a brief rundown of the experience.

A dolly with surge brakes is heavy as fuck. A dolly with permanently affixed ramps is really hard to pull without wrenching one’s back.

Due to Lesson The First, my dad rigged up a small bogie wheel to keep the ramps from dragging when the dolly is under human propulsion. This setup worked like a treat when dragging the dolly the 50 yards from its storage location to the RV.

Even with the setup, I found it almost impossible to drag the thing under my own power. Or, at least, getting it initially rolling was impossible. I will clearly need to keep the dolly nearby when attempting to move it. 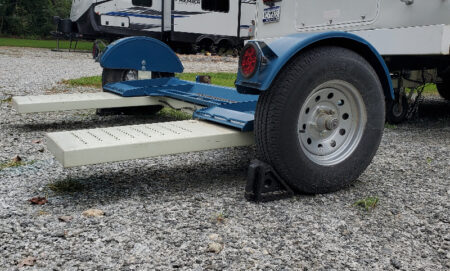 The ramps are permanent, so any tilting to pull the dolly results in dragging & scraping 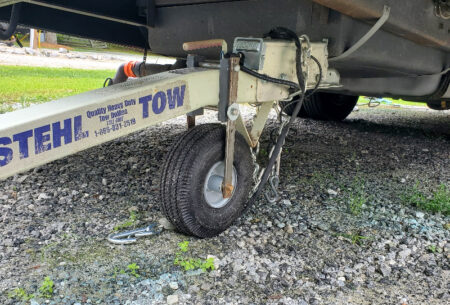 This bogie wheel allows the dolly to be pulled (by a person) without having to tilt it up and drag the ramps along the ground. 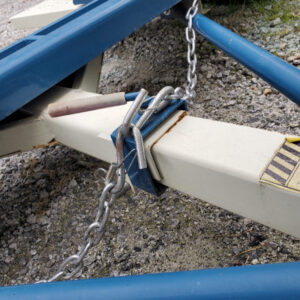 I was wondering, given the configuration of the ramps, what would prevent the dolly from smashing onto the ball hitch once the car was loaded. My dad suggested using a jack under the tongue to prevent this.

We had a real helluva time trying to line up the hitch and drive the car onto the dolly. Everything would go cattywampus with the slightest jostling.

I then had the genius idea to look on YouTube. Turns out, you don’t need to worry about slamming your ball. The dolly comes with a collar on the tongue that can be loosened while it’s hitched, allowing the ramps to tilt down for easy mounting. Whodathunk?

RV Parks don’t offer a lot of room to maneuver. We got the dolly hitched and the car mounted, so now it was time to exit my spot and hit the road. 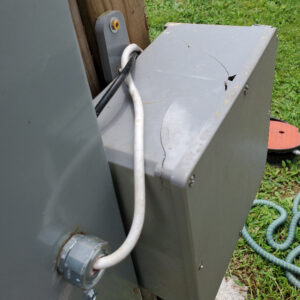 This was after the park manager reattached the box to the pole. Oops.

I needed to make a very wide right turn immediately after moving forward. I was carefully watching my mirror and looking for my dad’s signals when I heard the CRUNCH.

Yep. I had knocked an electrical box clean off the utility pole serving my spot. With the park manager standing right. there. Oops.

The rest of the activity was uneventful – we made a quick trip to the gas station and back (whereby I proceeded to get poop juice all down my leg when re-attaching the sewer pipe. But that’s another story for another day).

I feel like I’m 90% ready to hit the road with assistance, and about 50% without assistance.