Getting a cheap robot vacuum off eBay

Hey everybody! Long time, only occasionally see. I’ve been busy with life stuff and have only been able to pop in a couple of times a week.

I know the site is always hungry for content, so I figured I’d share the story of the dirt cheap robot vacuum I bought off ebay. 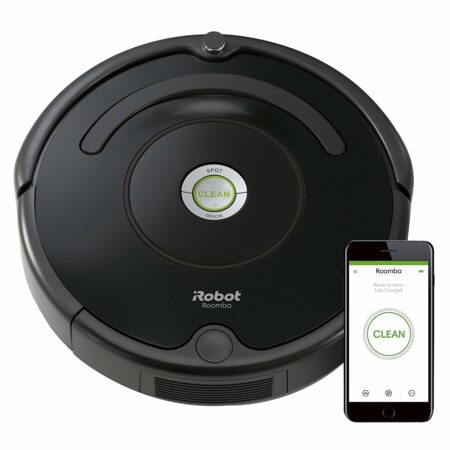 I’ve always been interested in robot vacuums since I was first introduced to them in college. My capstone project for my engineering degree involved coupling an Xbox Kinect to a Rooma via a microcontroller on a custom PCB. I wrote the navigation algorithm for the device, an algorithm that was probably more sophisticated than most of the robot vacuums have in them today. Unfortunately, that isn’t saying much.

The first one I got was a clearance refurbished Roomba 860 a little over a year ago. This is a base model Roomba, equipped with little more than a vacuum motor and a pair of wheels. The “deal” price of $179 I paid for a refurb was okay at the time, but you can get a new one for $150 now, and it’s hardly even worth that. Not the best deal I’ve ever made. 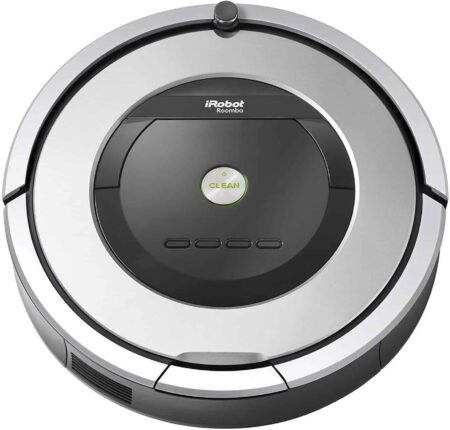 One thing I learned quickly about robot vacuums is that the way they differentiate between models is how much they cripple the software. There are hardware differences, too, but often the main difference is the navigation algorithm. For the 860, affectionately named “Mister” by my then 4 year old, the navigation algorithm was essentially random. Drive off the dock, point in a direction, and go. When you hit a wall, turn a different direction and go.

As you can imagine, this method of cleaning is, erm, less than ideal. The dirty little secret is that robot vacuums, especially the base model ones, are designed for Swedish studio apartments. A 500 square foot apartment with a bed and a dresser and two chairs is right in this robot’s wheelhouse. A 2200 square foot house filled with nooks and crannies and a zillion toys is not. 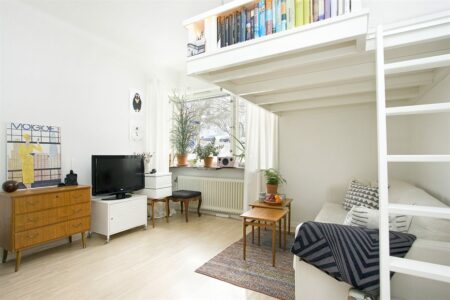 It was obvious that Mister was a bit over matched by our house. Mister would hit the same area 5 times and never hit another area. The extremities of the house were never vacuumed. He tended to get lost and die under a bed or behind a chair rather than making it back home to his charging dock. This first experience was disappointing because I knew it could be done so much better. He was retired 3 months later to be replaced by <del>Snowball III</del> a Roomba 960 we affectionately called… you guessed it… Mister. The original Mister will eventually go under the scalpel and receive some upgrades that are TBD. I need an electronics workbench before I start doing brain surgery on that particular robot.

The Roomba 960 was an immediate step up in quality, and at $228 for a refurb, it was getting into that “okay this is coming out of the hobby budget” territory. You can get them for $250 refurbished today, so this deal is holding up a bit better than the first one.

Mister 2 is much closer to what we need, and therein lies the problem. Mister 2 makes neat little rows and maps out the house to get every nook and cranny, but the software is crippled in frustrating ways. Yeah, I can see the map it makes, but I can’t exclude it from the workout room where it always wedges itself under the bench or that one dresser with a scalloped front edge that it gets stuck on. There’s no way to tell it to go clean the entryway after a kid walks in with grass all over their shoes or to hit that spot where the crackers spill. You can’t program it to vacuum the living room on Saturday and the kitchen in Tuesday. It’s binary. On or off. It also has a tiny dust bin that is usually full after 2/3 of a run. It’ll keep going, but becomes less effective when the bin is full.

Anyway, being somewhat disappointed with the functionality of Mister 2, I decided to do some research and I settled on a new target for upgrade. The problem was that we were getting into some serious money. The two options were the Roomba i7 and the Shark AI. The i7 is $750 new and the AI is $540 new. Both are absurd prices for vacuum cleaners, no matter how fancy they are. 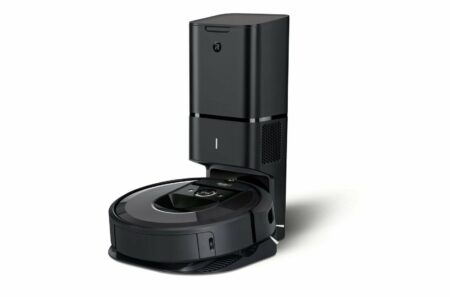 I chose to go with the Shark. The Roomba had too many unnecessary features, and I’m a bit annoyed with iRobot for crippling their software so thoroughly on their mid-range robots.

I found a listing on eBay for a Shark AI with a cracked base that “just needs a handyman to epoxy the charging contacts back in” and gave an offer of $185. Seller countered with $200 and I took it. He had free returns, so I’d just send it back if it was more damaged than he said.

Turns out it was. 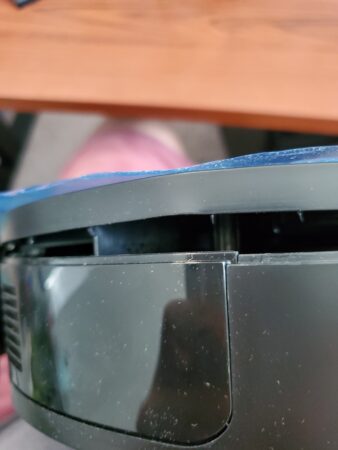 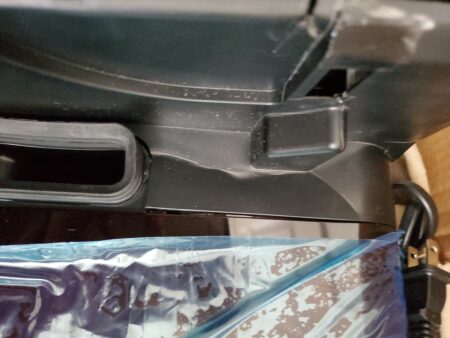 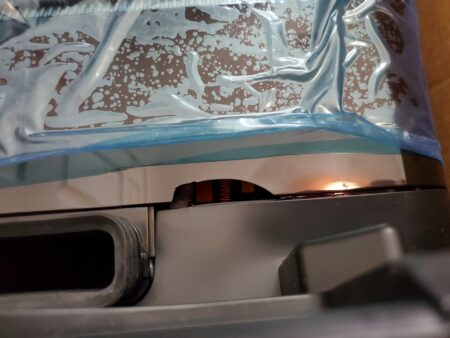 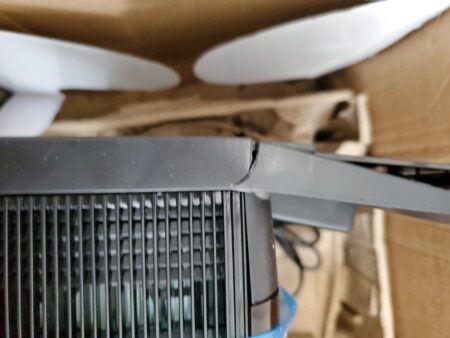 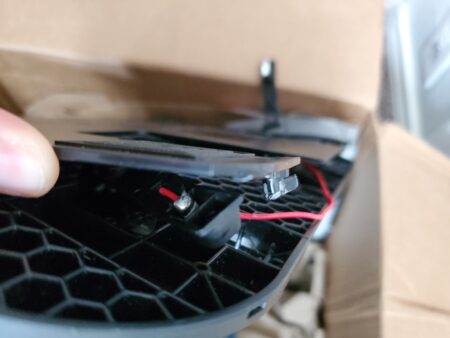 This thing must’ve fallen off the back of a truck or something, because the base was really jacked up, and the vacuum itself had some damage and some evidence that somebody had tried to repair it. However, I was able to test it out and figure out that the vacuum was in okay shape minus a pesky error with the dust bin (which could be replaced if need be). The base wasn’t salvageable. I initiated a return because it wasn’t as advertised.

To my surprise, the seller countered with a partial refund of $100. I accepted in a second flat. I was now the proud owner of a really messed up $550 robot vacuum, and I only had $100 in it. A quick perusal of ebay again found a refurbished replacement base for $65. Now, this wasn’t factory refurbished, and that part becomes relevant in a moment.

Once I received the replacement base, I plugged it in and confirmed basic operations. It charges the vacuum fine, and it sucks out the vacuum’s dust bin just fine. However, that pesky dust bin error was still happening, and the base’s dust bin was also acting up, as it had gotten stuck in the base. Tackling the second problem first, I took a screwdriver to the base, trying to pry the dust bin out without destroying the plastic of the base itself. I eventually got the dust bin loose and the rattling noise of a component made the problem obvious. There are top and bottom retaining tabs that are supposed to retract together when you push the release. The rattling component is the piece that causes the bottom tab to retract. Thankfully, I had a second base that was completely screwed up except for the dust bin. A simple swap later, and I had a perfectly working base. 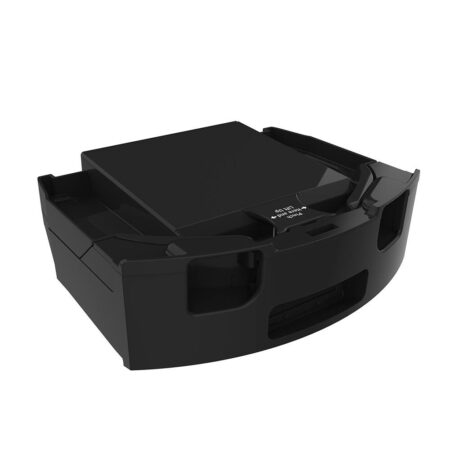 The vacuum’s dust bin issue was a bit more tricky. There is a rectangular port near the bottom of the back of the dust bin where it hooks up to the base for extracting the dirt. There’s a little flap inside that opens up when it plugs into the base, and I noticed it wasnt closing back up when it was supposed to. Manually pushing it shut fixed the error, but that wasn’t a solution. Thankfully, the problem was glaring, and the solution simple. Rather than a rectangle, the bottom edge of that opening had been caved in, impeding the operation. Of that door. One pair of channel lock pliers and about 20 seconds of prying later, it was rectangular again, and the door opened and closed with ease. If it ever causes an issue, a new dust bin is $40 or so. As of right now, the error is fixed and the robot runs properly. Sharky Mister, as the 5 year old calls it, is roaming the house, doing what it does best. Mister 2 will eventually be used again when we buy a multi-story house.

I got a bit lucky with the purchases I made, but it shows that you can get a pretty dang good deal on robot vacuums if you shop eBay. I had written ebay off as too risky in the past, but this project has given me some confidence in that site. I was able to get a $550 vacuum (with a few cosmetic dents and scratches) for $165.

Have any of you gotten good “some assembly required” deals on ebay?