It Can Be Done Amigo 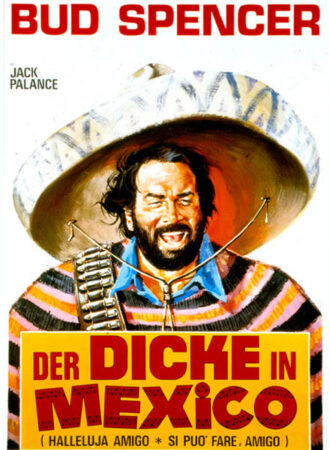 It Can Be Done Amigo

Columbia made a lot of what I would consider libertarian cartoons.  This is one of them.  A man sets out to build his own house, on his own dime, and grifters try to horn in. Since they can’t horn in, the grifters try to destroy it.  What happens next?  I am not spoiling anything, other than to say it’s a libertarian moment.  This cartoon was originally in color but is patched together with a black and white copy.  Per previous request, this is in YouTube so everyone can watch it.

On to our film!  As promised, I got a Western.  A lot of you had already seen the Trinity film series, so I grabbed one that goes a little outside of that norm.  It still has Bud Spencer in it and this is still an awesome film.  Our plot:  Bud Spencer and Jack Palance help an orphan claim his inheritance, so the child has some spare change to sort.  This film was even billed as “Trinity-adjacent,” with the tagline “Trinity’s pal is back!” Rake in that money, Bud!  This has all the good things in it:

It is lacking a monocle.  I didn’t see anyone wearing one.   Overall this is a very entertaining western that I believe will fall outside the famous westerns this crowd has already seen.  I am a big fan of Bud Spencer, he is that kind of every man tough guy who existed before the arrival of chiseled abs.  Some trivia about this film, it was shot on the same McBain Ranch (Thanks to Paul Phillips) as Once Upon a Time in the West.  You may recognize some scenery.

So watch!  Or don’t!  Everything is voluntary.  Next week, I am hoping to post The Dark Backward. The trailer is provided today, as the link is acting up on TUBI.  If this cannot be resolved I will have another film.