Shameless self-promo:  You can get Nova Roma 1 here or on Amazon.

Note:  This event happens in an actual place; if you drive north out of Ojai, California, and walk up the Potrero John Trail into the Sespe Wilderness, you’ll come on the place described.  I shot a lot of quail in in there in 2008 when I was working in the Los Angeles area.

“Walk about a league up that creek,” Marcus Varus told Centurion Tacitus, pointing up a small tributary to the main stream.  “You’ll come out of the canyon into a big open area.  There is a trail leading up the hillside to the left, and just over the far side you’ll see a small stand of those funny short oaks.  We killed the wapiti in there.”

Tacitus nodded.  “Good.”  He wrapped his heavy robe of bison skin more securely around his shoulders and set out.  Spring was well under way here in the western hills, but a damp, chilly spell had set in the day after the Romans had made their camp in the valley.  “Marius and Dorotheus will be coming along.  Give them directions to the kill as well.”

“I will, sir.”  The legionary saluted and went off down the canyon, whistling. 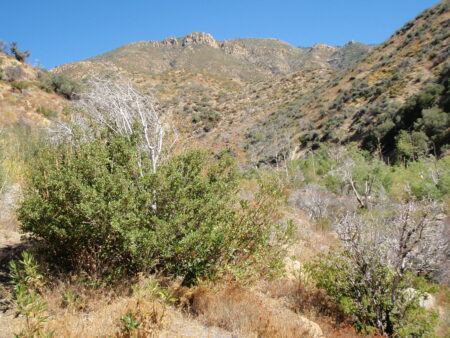 This country, this golden land that the guide Julius Spotted Horse described, did not measure up by the centurion’s standards.  He preferred the deep, cool forests of Tahonia; the rivers, the meadows, the lakes teeming with fish.  This country was pretty, Tacitus supposed, in its own way.  The hills were rocky and steep, covered with low brush and only a few trees.  Quail, deer and wapiti were plentiful.  At least the men fed well.  But Ursus Tacitus would be glad to be back in Tahonia when this was over; he was, after more than a year on the trail, growing homesick.

After a brief walk the canyon opened out into a large open basin, as Varus had described.  A covey of quail buzzed away to Tacitus’ right, bringing a smile from the giant.  It wasn’t well known, but he was a man with a fine appreciation of the beauty of the natural world.  He looked at the hill to the left and saw what looked like an animal trail leading up.

Tacitus walked quickly up the slope.  At least the rain had stopped, and the sun was beginning to peek through the clouds.  The wapiti kill should be just over the crest of this hill, he told himself as he walked along.  Varus said it was just on the other side, in a small stand of oaks.  I can carry twice what the others can, the better to have this done before nightfall.  Wapiti liver will taste good…

Tacitus crested the hill slowly, cautiously.  Something was moving around in the small patch of trees just thirty paces or so below him; something large enough to shake the small, bush-like trees.

Someone is trying to steal our kill, Tacitus thought.  Some local boys, probably, saw the chance for some fresh meat without having to work for it.  He stood tall, puffed up his chest and roared:  “All right!  Come on out of there now!”

The trees stopped shaking for a moment.  Tacitus heard a huffing sound.  That’s no boy.  That’s an animal – a big animal.

He drew his gladius.  He saw a large, broad form – impossibly broad – covered with grizzled brown hair.  It was moving his way, very, very fast.

The bear roared as it charged.  It was a massive old boar of the type the men called Ursus Magnus; nothing at all like the timid black bears of Tahonia.  So far the men had only seen them at some distance.  The big animals were thin on the ground, a fact the legionaries had remarked on and were grateful for.

This bear was not at a distance, and was not inclined to brook argument over the wapiti carcass it had claimed.  It burst forth from the trees only steps from where the centurion crouched, sword held ready.  Tacitus had a brief impression of a huge, grizzled animal with a humped back, dished muzzle and an impossibly huge head armed with a mouthful of yellow teeth.  He had only a moment to wish uselessly for a scutum before the bear hit him.

The centurion managed a stab with his gladius, aiming at the spot where the bear’s head met its neck, but missed as the bear swung a massive paw to strike at his head.  Tacitus turned, managed to take the blow on this shoulder and instead of hitting the vital spot, managed only to drive the blade into the bear’s side.  The bear’s swipe knocked him off his feet.  By some miracle he managed to keep his grip on his sword; he rolled and came to his feet, staggering slightly.

The bear bit at the wound on his shoulder.  He shook his head and looked at the Roman centurion.  Man and bear faced each other.

“Come on, then,” the centurion taunted the beast.  “Do your worst.”

With a roar, the bear came for Tacitus again.  Tacitus met the charge with a bellow of his own.  He managed to strike the razor-edged blade home in the bear’s neck even as the bear’s massive paw came crashing into his head.  He fell to the ground, stunned.

A horrible pain accompanied by a grinding sound told him the bear had sunk its teeth into his shoulder.  The bear shook him like a dog with a rat.  There was something else; a stink of copper, a sticky liquid on his face…

He grasped at his belt.  His stabbing dagger was still secure in its sheath.  He grabbed it and struck at the bear’s head, again and again.

Growling, the bear dropped him and staggered off.  Tacitus rolled on his side, groaning in agony.  He saw the bear, walking slowly in a semicircle; blood pumped steadily from its neck.  I struck the artery, he realized.  Even as the beast staggered back towards him, Tacitus closed his eyes.  The world went red, then black. 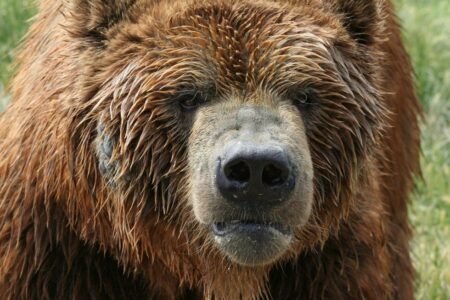 Legionaries Celerius Dorotheus and Faustus Marius were following Tacitus’ trail up the hill when they heard the bear’s roar.  “Did you hear that?” Marius said.

The men ran to the crest of the hill.  “Juno’s mercy,” Dorotheus breathed.

Tacitus was lying on the ground, either dead or unconscious.  An enormous bear was nosing his body.  Blood stained the bear’s muzzle and ran in a stream from its neck.  Sensing the arrival of the two newcomers, the beast rose on its hind legs and roared a warning.

Marius reached into his quiver for an arrow, nocked it, and aimed.  He loosed an arrow that slammed into the bear’s throat.  The beast dropped back to all fours with a gurgling noise, and started up the hill towards them in a shuffling lope.

Marius nocked a second arrow.  He aimed carefully.  He knew his reputation; he was supposed to be the best archer in all the Tahonian legions, possibly in the entire Roman army; now would be the test.  The great beast only had one vulnerable spot Marius could see…

He loosed.  The iron-tipped arrow leaped from his bow to slam home in the great bear’s left eye, driving through to the brain.  The bruin sank to the ground with a groan, twitching as its last breath ran out.

Marius and Dorotheus ran to their fallen comrade.  Marius knelt by the giant.  “He’s alive.”  The archer looked up.  “Run and get Bubonius and the Tribune.”

Marius examined the fallen giant.  Tacitus’ eyes opened for a moment; he looked at Marius.  “About time,” he rumbled.  “What took you so long?”

“Oh, you know how it is, sir.  We passed a village, and there were these two girls…”

“Dead,” Marius said.  “I finished it for you, but you struck a fatal blow.  It would have bled to death in a few more moments.”

“Good,” Tacitus breathed.  “I’ll wear its pelt with honor.  He was brave.  A worthy opponent…”  The giant fell off into unconsciousness again.

“Few enough of those for a man your size, I’ll wager,” Marius said.  He pulled the giant’s bison-skin robe out from under the fallen man and covered him with it.

With that done, Marius walked over to look at the bear.  “Horrible beast,” he muttered to himself.  “What a horrible, horrible bear.”

Were the beast not laying before him, Marius would have had a hard time believing such an animal existed.  He knew bears; the black bears of Tahonia and the mountains of Tsalesia could be dangerous if cornered or provoked, and the boars sometimes grew quite large.

Marius looked at the bear’s neck.  Tacitus had indeed struck a fatal blow; blood still oozed from the deep wound.  A pool of blood spread on the ground under the beast.  “How many men have ever faced a beast like this and killed it with a sword?” he marveled.