“Rise,” she told the ocean.

They had crisscrossed the continent in their battered Subaru while she was in the womb, dreaming. They had said the prayers to the gods of the forest and walked in the forgotten places of the desert where ancient cities of the dead clawed at the entombing earth and at the edge of the ocean where potential, dread potential, had filled her mother like a second and dark child.

“Rise,” she told the ocean, her thin arms held out, her hands open and fingers beseeching.

Promises had been made in oath, blood, semen, and sacrifice to connect the child to all the powers that waited for the spreading stain of humanity to recede. Conceived in filth, she had crouched in the womb for nearly two years before splitting her mother open, like a lightning-struck tree. It had rained for ten days after she spat herself into the world, the demons of wind and rain providing a baptism. Two hundred humans had died in the flooding, a gift to the child as she howled in tainted bowers while priests sewed her mother back together.

“Rise!” she told the ocean, tears beginning, quivering on the lower lids, begging permission to fall.

They watched the signs and portents as the child grew. They fed her nightshade and Jerusalem cherry. They fed her crab’s eye and wolfbane. They fed her ragwort and pennyroyal. All the poisons of the earth flowed into her and she grew strong. “I love you,” would whisper the mother as the child rubbed ongaonga in her young flesh and sighed with pleasure.

“Rise!” she told the ocean as her parents, nude beside her, lashed by the growing wind, smiled down at her lisping blasphemy.

When the stars came right, they visited again all the places they had been as she gestated, letting renewing vows with her own voice, gathering blessing and gifts, making sacrifices anew with her own hands and teeth. They drove from atrocity to atrocity until they reached the western ocean.

“RISE!” she told the ocean, her voice cracking like a cloven stone.

The trees of the forest screamed and the sands of the desert howled and the frozen wastes began to tremble and shake. The wetlands bubbled with insane laughter. It was beginning. 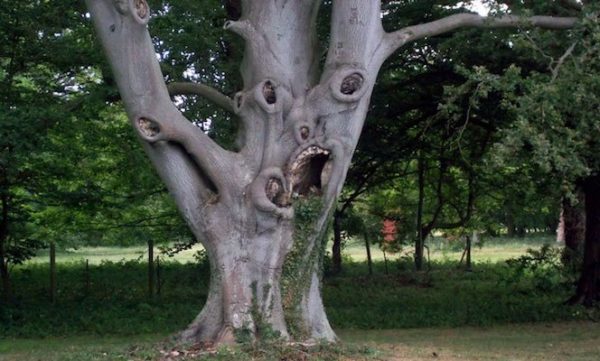 Her father cut off his genitals and flung them into the sea. “The blood of the father,” he whispered as drew he bloodied hand down the right side of the child’s face. Her mother reached between her legs and smeared the blood found there down the left side of the girl’s face. “The blood of the mother,” she whispered as she sank to the sand, the languid menstrual flow becoming a spray that spilled her life out onto the hungry beach.

“RISE!” she told the ocean, her eyes wide and white under the blood.