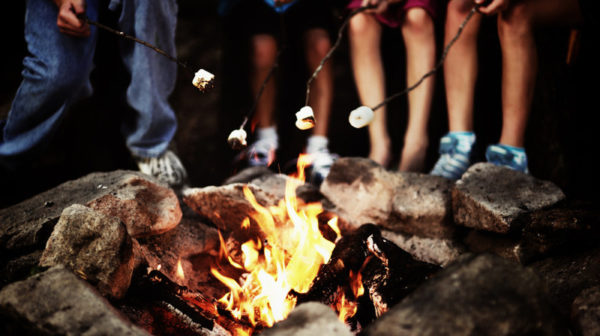 The summer of 1984, at a sleep-away camp in the Tennessee mountains, the counselors–earnest, well-scrubbed Christian kids–would tell us ghost stories around the campfire. If I had been older, I would have recognized most of them as fairly standard urban legend stories: the hook-hand, the spider eggs, the vanishing hitchhiker. When I was younger, I had heard almost the same stories at sleep-over camping trips run by the YMCA, so they didn’t bother me all too much.

But on nights when the counselors left our 16-kid cabins to drink or fuck or sneak off to the McDonald’s in the little town nearby, one of the kids that had been at the camp before told us The Story, an oral tradition that had been passed down kid-to-kid for who knows how many years. A horror story that carried a lesson in socialization and proper behavior. Here’s how I remember it…

There was a boy a few years back who had nightmares. His name was Timmy. He would thrash around in his upper bunk bed and call out. He kept all the other kids awake and they would be exhausted the next day, not having any fun, doing poorly at the archery range or falling asleep by the pool.

At first light, Timmy would jump down from his bunk and race to the bathroom facility, someways down the mountain that had been dotted with camper cabins. His bunk-mates understood that this meant Timmy was too afraid of the dark to go to the bathrooms at night. But this lead to Timmy finally having a nightmare so bad that he peed the bed, the urine soaking not only his mattress but also dripping down on the kid below him. Everyone was disgusted when they found out what had happened and so when the cabin counselor took Timmy down to the bathroom to get him cleaned up, a plan was hatched.

The next night the counselor was gone–like that very night we were hearing this story–all the boys in the cabin woke Timmy from his usual nightmare, rolled him in his bedsheets and carried him out into the woods, never saying a word. The carried him far from the cabins and the lights around camp and tied him up in a tree. Not to a tree, up in a tree, dangling a few feet off the ground and gagged him. Timmy begged and squirmed and screamed into his gag, but the other boys left him there, not telling him if they planned to return. They went back to the cabin and all fell asleep.

Timmy couldn’t get loose and he couldn’t cry for help. There was no hope anyone from the camp would find him by accident. He hanged there limp and defeated.

And then something licked his foot.

He looked down. As quiet as ghosts, a pack of wolves had surrounded the tree he was suspended in. Another lick of his foot. It almost tickled. Timmy screamed. The closest wolf finally bit his foot and tore away a few of his toes. He could feel the other wolves lapping at the blood. This drove the wolves in a frenzy, more of them biting his feet, worrying off their own pieces of Timmy, tugging as they pulled his flesh away. Timmy screamed until he had no voice left.

The wolves continued eating Timmy, bracing against the tree to eat further and further up his legs. Finally jumping to bite into Timmy’s knees, dangling there until their body weight tore off another chunk of the boy. They ate Timmy down to just stumps.

After the wolves were done, they wandered away into the woods. Timmy was quite insane from pain and shock at this point. But all the terrible tugging of the starving wolves had loosened the ropes and he finally fell into the mud his blood had made at the base.

Using his hands and arms, Timmy dragged himself into the woods, vowing revenge. He would go back and kill the boys who had done this.

The boys from the cabin returned the next morning and found blood and chewed bone at the base of the tree. They assumed that Timmy had been entirely eaten and realized they would be in huge trouble if it was discovered what they did. They climbed the tree and took down what was left of the ropes, they threw the chewed bones in different directions and piled leaves and loam over the blood at the base of the tree. They made a pact never to talk about this to anyone else as long as they lived. And then they went to the cafeteria to eat breakfast.

When it was discovered that Timmy was missing, the summer camp organized a search for him, assuming this troubled little boy had run away. When they found nothing, they called in the state police. The state police interviewed the counselor, who lied and said he had been in the cabin all night; when they interviewed Timmy’s cabin-mates, none of them confessed to what they had done. When the state police finally left empty-handed, the panic and unrest in the camp died down. Buy this time, summer was almost over. The boys who left Timmy to the wolves were about to go home to various states.

On the last night of camp, Timmy got his revenge. He dragged himself into his old cabin, his half-healed leg stumps leaving tracks of mud on the floor as he smothered the boys one-by-one, quietly to not wake the others. But just the boys on the bottom bunks. He couldn’t reach the ones on the top bunks. They were safe.

The next morning, the surviving kids woke to find the muddy drag tracks on the floor. Their screams woke the counselor and he freaked out at finding all the boys in the bottom bunks dead. The survivors of the massacre instinctively knew this was the work of Timmy.

They warned the other kids at camp that Timmy was still out there and he could get you if you slept in the bottom bunks.

What a fantastically gruesome story, right? 36 years later I still think about, maybe more than I should. I know that the boy in my cabin, in his upper bunk, didn’t tell it just like I did. I’m sure I’ve added details and embellishments to where the story is just as much as his at this point. But I know it was about a boy left in the woods who had his legs eaten off by wolves, and the revenge he extracted.

So many plot holes, but, then, this was a child’s story told to children. Terrified in our bottom bunks, we didn’t think about the distinct lack of wolves in 1980s Tennessee, or effects of traumatic limb amputation and blood loss on a 12-year-old, or the camp somehow covering it all up and not being sued out of existence.

Do any of you have one of these? Or local urban legends? Please share in the comments.