Back in May, I pre-ordered the remarkable 2 as a gift to myself for getting us moved across the country and as an experiment to see whether reading and handwriting notes on an e-ink screen would cause less eyestrain for me while working. I often suffer from headaches and acute myopia after long days staring into the loving warm colors of the LCD screen, but don’t suffer the same ailments when, say, reading a book. Can an e-ink screen reduce the strain and discomfort?

After a few COVID related (or at least they blamed it on the Covid) delays, I finally received my reMarkable 2 in mid-November. I’ve had it for less than a week, but have used it as extensively as I can justify over that time. I have the ability to return it after a trial period, but as I’ll flesh out later on, I think I’ll keep it.

The initial impression, pre arrival, was that this was a damned expensive toy. I bought the upgraded stylus and the folio cover, and was over $400 dollars all in. That’ll buy you a metric ton of notebooks. However, I’m a big fan of e-ink and the alternatives in the market are either just as expensive e-ink tablets or iPads. The technology is niche, thus expensive.

Upon receiving the package, I was impressed with the quality of the hardware. It feels like it’s well built. The seams are perfectly matched. The heft is balanced. The magnet that holds the stylus is freaking strong! Everything hardware related feels well thought out and well executed. 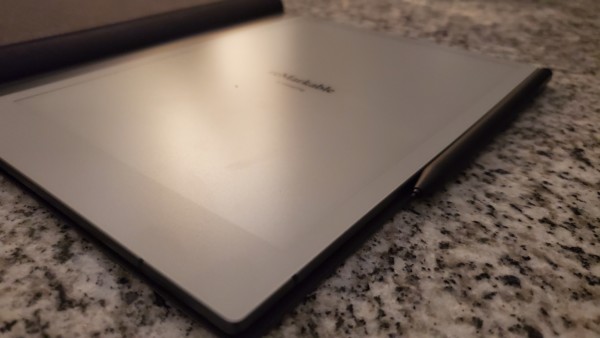 The two biggest aspects you notice upon picking up the remarkable 2 are the insane thinness (4.7mm) and the hefty weight (0.9lbs). These work well together. It’s thin enough to easily grasp and write on like a notebook, but it’s heavy enough that you’re not pushing it around while you write. 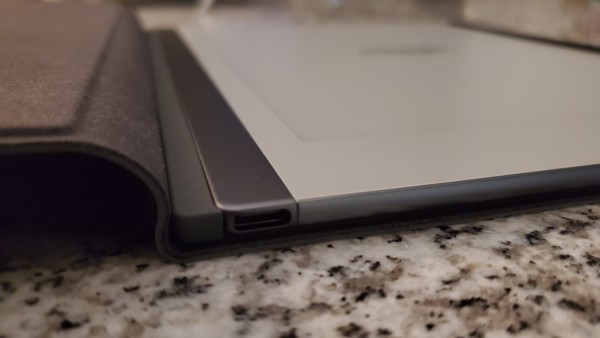 One of the big things that reMarkable hypes up is their “real paper feel” when writing. They accomplish this with a combination of a coating on the screen and a graphite tip on the stylus. They send you a dozen replacement tips, so you’re set for a while.

Does it actually feel like paper? No. It’s in the ballpark, though. Best analogy would be a smooth ballpoint pen on resume paper. Definitely better than the writing on glass feeling you get from a traditional tablet. The stylus is a bit more rear weighted than I’d like, but it’s something you get used to in no time flat. Nothing worth complaining about. 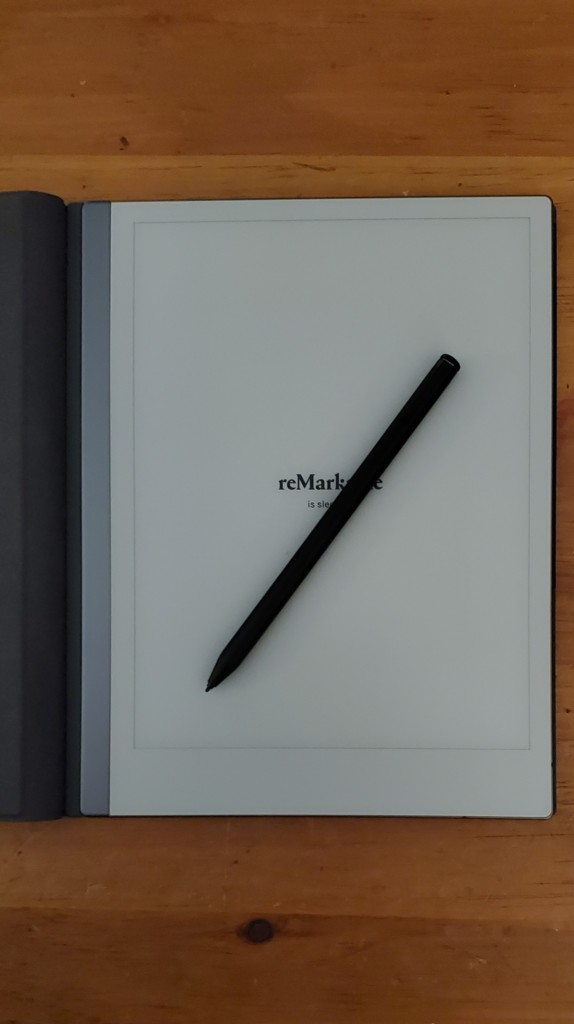 Supposedly the battery life is great. A couple weeks of regular use or a month of passive storage. There are some power saving steps that are taken (like shutting off the touchscreen after a certain period of inactivity), but nothing obtrusive.

When you boot up the tablet, it walks you through a barebones configuration, connects to WiFi,  updates and dumps you out into a cloud hosted document library. Anybody who has used a cloud storage service will recognize the paradigm. From there, you can fire up a quick note and start drawing. There is a settings bar on the right hand side (somewhat reminiscent of Eyepiece, for better or worse) that allows you to adjust the type of writing utensil that it behaves like, among other things. 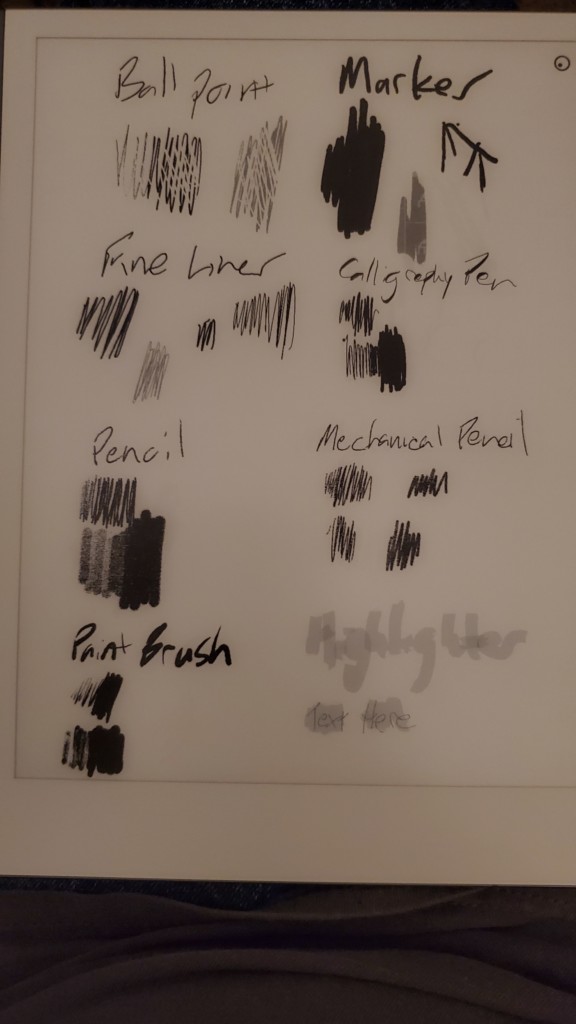 Many of these are pretty faithful to their physical counterparts. Ballpoint pen and the pencils were particularly close. There’s also a thickness adjustment that is helpful. My handwriting sucks (as you can see), so the thinner the better for legibility. You can see (especially with the pencil) that there is angle sensing and pressure sensing capabilities in the stylus that are useful if doing more artistic things with this tablet.

The limitations start appearing here, though. The stylus resolution is less than the screen resolution, which introduces ugly jitter into some lines. The eraser is similarly limited, carving out more area than the actual physical eraser covers. That makes for some interesting erasures when you take out half the line above where you swipe the stylus. Are these hardware issues? Software? I lean towards the latter. The eraser issue could be resolved through a simple adjustment to the software, but there’s no setting to do so. The jitter issue? Well, third party styluses don’t have this issue, so it could be hardware, but I’m guessing it’s a software issue.

What’s it worth to be able to write on the thing if you can’t import and export documents? Well, this is really where the flaws of the software become acute. The primary connectivity is to a proprietary cloud storage system with a proprietary file format. PDF and epub files can be imported into the cloud storage and marked up, but some obvious formats are missing like DOCX, kindle, and OneNote. There is a feature where you can import a web page and write on it, too. 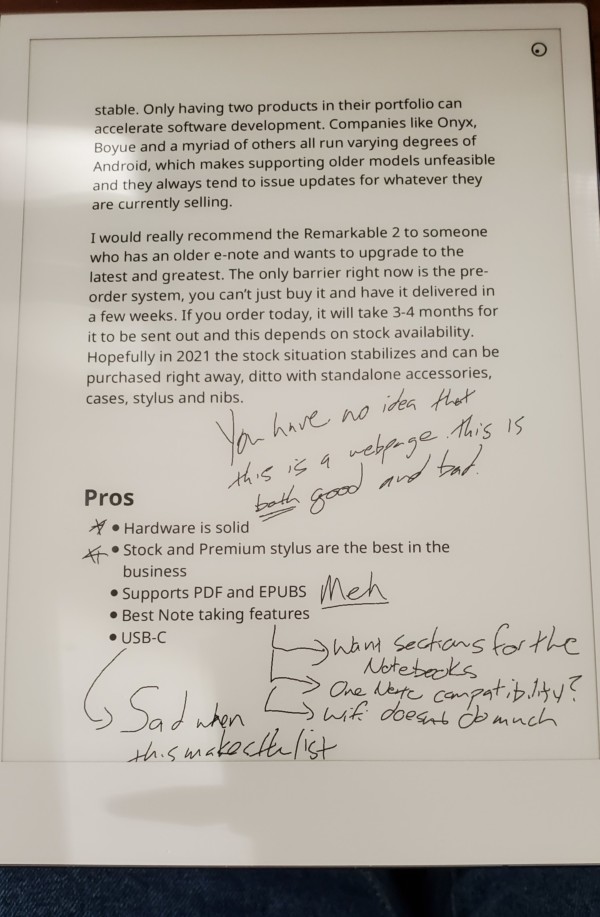 Exports are similarly limited. You can export notes as PDFs and as PNGs. Both look awful, in my opinion. There is an email export in both pdf/image and OCRd text formats. I was suitably impressed by the OCR. 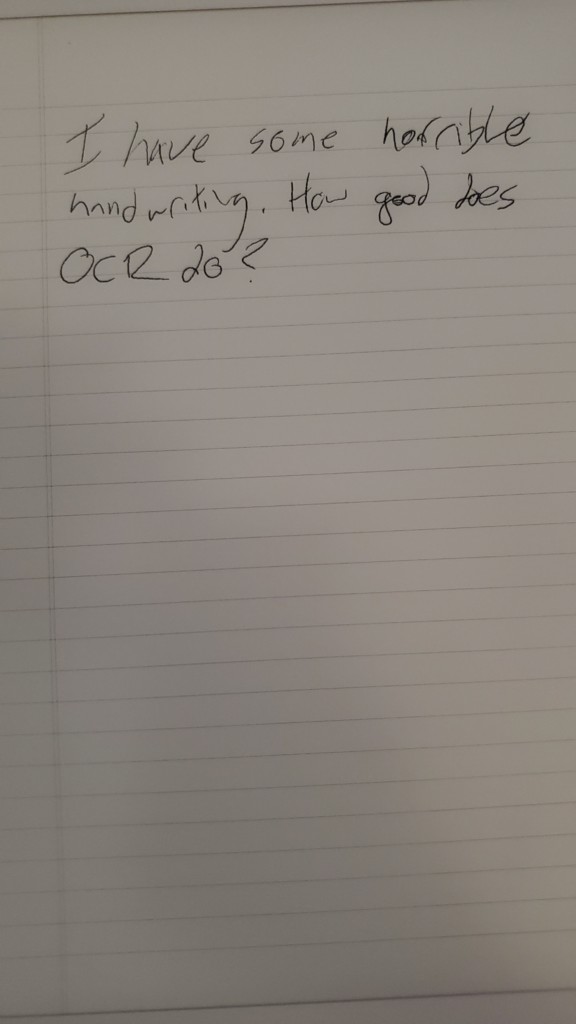 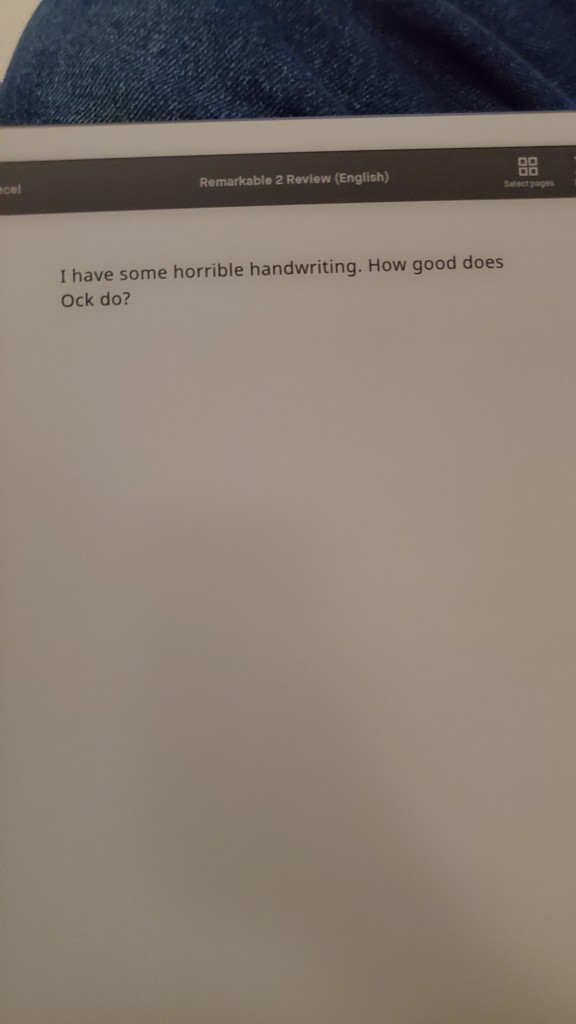 Not too bad! By the second attempt, it got it correct.

To be blunt, the lack of connectivity has made me seriously contemplate sending this back. What they market as distraction free productivity is really feature paucity. I sat and stared at the thing for half an hour before figuring out something I could do with it. Notes are fine, but what’s the improvement over a pen and paper if you can’t do anything with the notes? 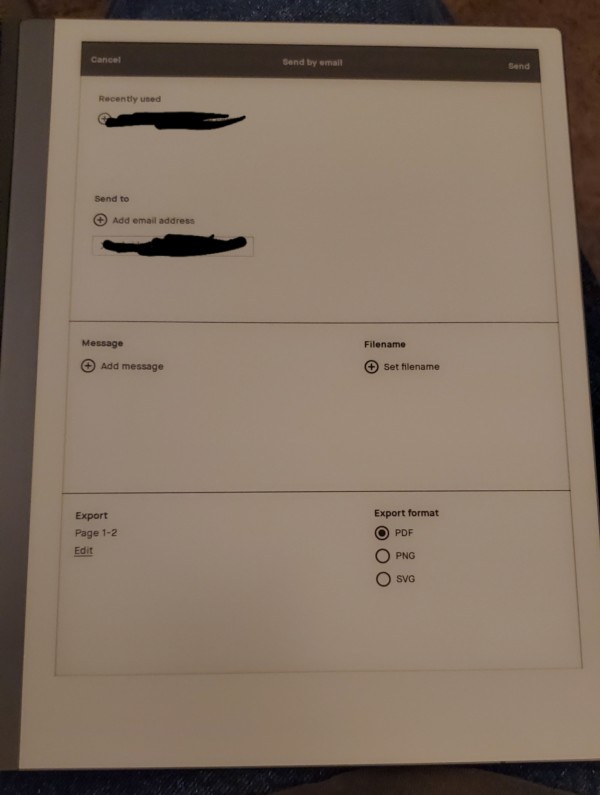 There are many templates available to write on, most of which I’d never use. However, many of them are good and you can design your own and upload them somewhat easily. I really would have liked the notebook functionality to include section dividers. It’s pretty debilitating to not be able to organize related pages in the same notebook. 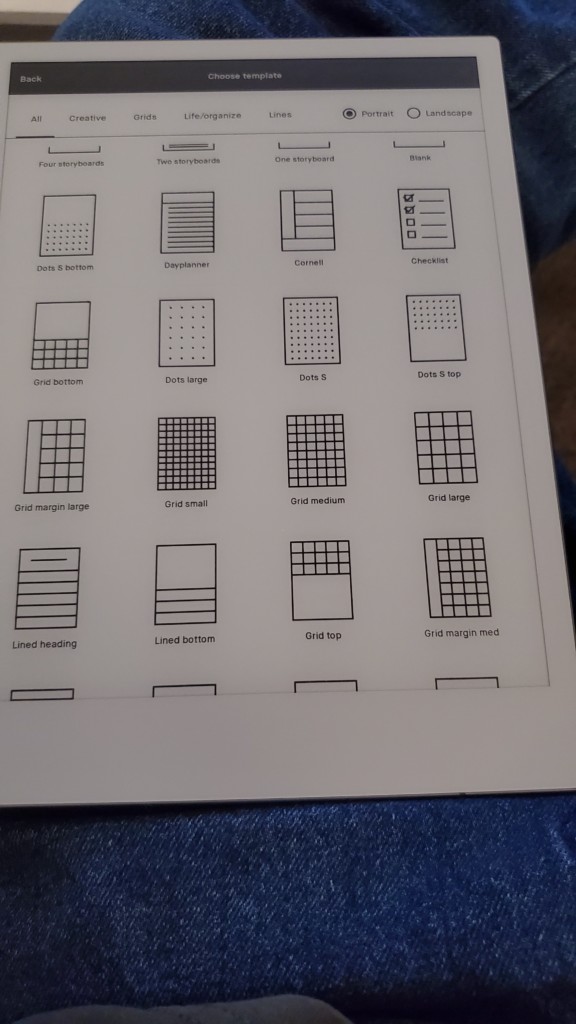 When you find a good template, it is pretty useful. 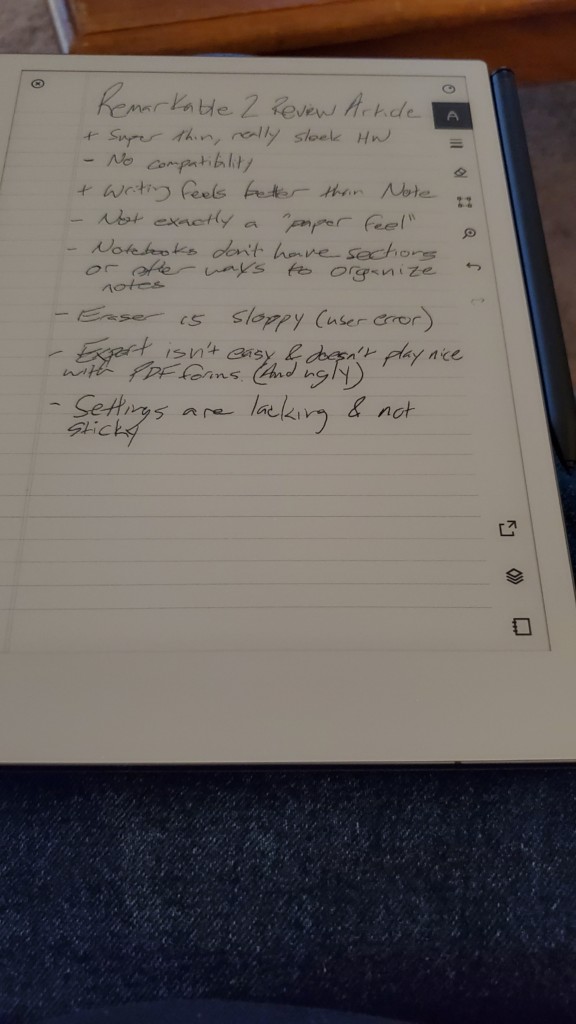 I don’t think I’ve ever owned a product with such great hardware and such garbage software. The good news is that it runs some embedded form of Linux and has an open SSH connection. That means that I can replace the software with some of the available open source alternatives or write some myself. I’m motivated to do so, because this is a really cool device that is repeatedly crippled by horrendous software. I can’t recommend buying it, but who knows what the future may hold if people develop halfway usable software for it. It has a lot of potential.