I’m trying something different now, since everyone seems to enjoy the bits of fiction I’ve put up here.  Kudos to anyone who spots the inspiration for this multi-part story, although I’ve made it kind of painfully obvious. 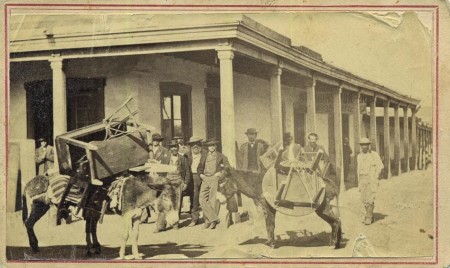 She kicked me out this morning, a year to the day since we wed.  Reckon it’s been too long since I was in civilized country to hold on to a wife for long.  Egypt ain’t the place to learn fine manners.  So, I may as well find some sort of work.  I’m back in Carson City for now, if there’s any sort of paying work to be had it is likely to be here.  Droving, I reckon, or maybe I’ll take up prospecting.  Maybe something else.  Fellow who’s good with a gun can always find a way.  With a bit of luck, something here might set me on the right track.  Might even get enough gold ahead to entice my wife to let me come back home.

Bob walked into the Dollar, his favorite Carson City saloon, and slapped the dust off his threadbare gray trousers.  He was a tall, lean, hard-faced man in his middle forties, with icy blue eyes, bushy side whiskers and thick brown hair that he had worn long since the War of the Northern Aggression, over twenty years since.  Four years as a cavalry scout under General Wade Hampton and ten years in the Egyptian Khedive’s army had left him embittered and broke; Ismail the Magnificent’s generosity did not live up to his name, not even with the former Confederate soldiers he retained to train his army.  The only thing Bob had managed to retain from his years of service was his old Colt’s Navy revolver, which hung now in a battered old Texas loop holster on his worn leather belt, and the nickname some of the other former Rebels serving the Khedive had hung on him:  Cairo Bob.

Now, in early November, Carson City was enjoying a stretch of unusually fine fall weather, but that didn’t help Bob’s mood any.  The sight of the Dollar didn’t help; it was a long, narrow, dusty room, with a few tables along the wall opposite the narrow, grimy bar.  Hal Ketch, the bartender, stood behind the bar, slowly polishing a glass with a dirty towel, his usual expression of eternal boredom etched on his square face.  At one of the tables, two old men sat, playing a card game, tiredly.  Bob didn’t know their names.

“Morning, Bob,” the bartender greeted him.  It was a few minutes shy of noon, railroad time.

“Any word from the Missus?”

“Not since she kicked me out,” Bob drawled.  “Six goddamn months ago now.  Gimme a whiskey.  Need something to open m’eyes.”  He still missed Isis terribly; when he closed his eyes, he could still feel her lean, long body, could still smell her long, black hair, sage overlain with something musky.  She was still there, as far as he knew, in the cabin up Clear Creek canyon.  He hadn’t been back since that last day.

The bartender placed a glass and a bottle of cheap rotgut in front of Bob.  “What will you do?” he asked.

Bob poured out some whiskey and swallowed it at a gulp; it burned going down, as though he had swallowed a strand of barbed wire.  “Dunno.  Thought about goin’ home to South Carolina.  Don’t know as I want to do that.  Bad memories.”  Like many former Confederates, he had a hard time accepting the loss, even now, over twenty years later.

“Don’t make it no easier,” Bob snapped.  As Hal turned away, Bob thought he heard him mutter, “Damn stubborn Reb,” but not so loud as to allow Bob to take offense and start up a scrap – besides which, if he did that, he wouldn’t be able to come in and drink again.

Not that his dwindling supply of cash would allow that much longer in any case.

“Hey, Reb,” one of the old men playing cards called.  Bob bristled a little, but the old fellow hadn’t meant anything by it; it was just a label, and Bob realized that, with his Low Country accent and the old gray Confederate trousers he still wore, he could hardly deny it.

“You still lookin’ for payin’ work?”

“Hell, yeah,” Bob replied.  “Got myself kicked off my own damn place.  Man has to eat somehow.”

“Fella was through here yesterday,” the old man went on, “looking for someone to help him with some kind of big job. Said he was headed north, up towards Nez Perce country.  If’n you was to get on the road right sharp, you might catch up with him.”

“Said he was headed north?”

Bob poured himself another whiskey and stared at it moodily.  Almost out of money, he reminded himself.  Long ride up to Nez Perce country.  Five days, maybe six.

His horse was across town at a stable, as was the rest of his traps; nothing more than a few clean shirts, a bedroll, his saddle, and a battered old Spencer rifle that dated back to the war.  Bob had in fact been sleeping in the stable himself these last six months, ever since his wife had kicked him out.

Well, hell, he thought, it’s not like I got anything to lose.

He downed the whiskey, dropped some coins on the bar and headed out into the street.

On an impulse, perhaps driven by the prospect of a fresh start, he went into the town’s only barber shop and laid down a precious ten cents for a haircut and shave.  Bob emerged onto the street with a close-cropped head and a clean-shaven face for the first time since the end of the war.  Feeling somehow renewed, he went to the stable, settled with the stable keeper for board of his horse, saddled the animal and rode off north.

Long stretch of wild country ahead of me, he thought, as he reached the edge of town and spurred his horse to a canter.  He sat in the saddle with the ease of a veteran cavalryman, and his horse moved effortlessly; in spite of his poverty Bob had made sure to keep the animal in fine fettle and his horse furniture was in good condition.  The horse soldier’s creed of the horse, the saddle, the man was still deeply ingrained in his soul.

He reached forward and tapped the stock of the Spencer.  He had only one seven-shot magazine full of rounds for the rifle but figured he could find some more if he needed to.  Don’t know why, he told himself, but feels like things might finally be turning my way.  Things can’t go too far wrong – either way, I’m better off than setting around Carson City feeling sorry for myself.

Get to see some new country, anyway.  Never been that far north before.

The weather was turning.  A light snow started to fall as he took the road north towards Boise and the Nez Perce nation.

I married Isis on the fifth day of May,

But I could not hold on to her very long.

So I cut off my hair and I rode straight away,

For the wild unknown country where I could not go wrong.