Friends and loved ones,

I recently returned from a 10 day trip to Beijing. Please let me start by apologizing about the promised-but-as-yet-undelivered pictures. I forgot when I posted that link that it was to my work dropbox account, so for those of you who let me know you couldn’t access it, my apologies. I also have other considerations, as some of my friends still work in the military in counterterrorism and/or intelligence, and so putting (some of) you all together into an open dropbox folder might not be the best idea. Instead, I’ll have to point you to the abyss known as social media, where I occasionally post pictures of my adventures. If you don’t have a smart phone (and thus can’t download the instagram app), you can simply go to instagram.com and search for “Ozymandias.”* That’s me.

I will also attach the occasional picture or two here for you all to pull down if you like. This time I’ve included one from the Great Wall that I got after we climbed up to the far end of the Mutianyu section. We got fortunate with a light snow – the first all year, I’m told – and it produced the picture here. I’m no photographer, but I think the Gods were smiling down upon me when I looked back upon where we had walked. I’ll let you decide for yourselves. 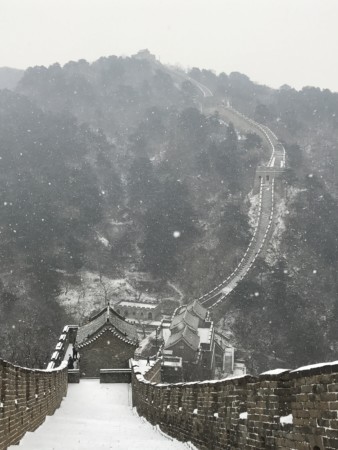 Going back down was like descending a snowy ladder… OSHA was not consulted in the construction of the Great Wall of China.

After a day at the Great Wall, we managed to get over to the Forbidden City, built by the first Emperor of the Ming Dynasty, Zhu Dai. Construction began in 1406 and was completed in just 14 years. If you could see it, you would appreciate just how incredible and impossible that sounds, but that seems to be a theme for my limited time in China: they can build stuff that makes the Pyramids of Giza look like a Lego project…and they do it in a hurry. Forced labor – aka slavery – on a mass scale really GETS SHIT DONE as it turns out! Anyway, I would invite anyone to take a click on the wikipedia article on it; there are some good pictures, as well. When you factor in all of the work done on the Great Wall during the same time, as well as the Temple of Heaven (a separate historic religious site), Tianamen Square, and on and on… your mind starts to get a little numb with all of it. How could they possibly have built so much, on such a scale…?

When you walk into the Forbidden City, it is immediately apparent that the entire intent was to humble anyone coming to see China’s Emperor. You can’t help yourself. I don’t care if you were riding at the head of an invading Army: if you rode in through those main gates into the first courtyard… you couldn’t help but be awed by the scale of it. That courtyard would actually hold an entire army… comfortably. I’m not being hyperbolic – I’ve seen Division-sized changes of command in the military.

The camera can’t possibly capture the scale of just the first inner courtyard…of many like it.

If that wasn’t enough, you go through many, many of these traditional temples and structures before you ever get to the North side of the Forbidden City, where the Emperor and Empress resided. And that says nothing of how it stretches East to West. It covers roughly 180 acres and has – coolest of all – a 52 meter wide moat! Yep, it’s got a flipping moat!

It also houses some of the greatest treasures of the ancient Chinese empire, now behind glass in long stretches of interior corridors, making it the most visited museum in the world at over 14.5 million visitors annually… yes, more than the Louvre, which makes this a good time to introduce scale regarding China.  The entirety of France’s population in 2016 is estimated at roughly 64.5 million people. Fine, round up to 65 million Frogs. The population of Chongqing (what we in the west used to know as “Chung King”) is generally accepted to be around 60 million people. Yeah, all of France’s population is covered by ONE city – unquestionably a big one. Depending upon whose list it is, it’s the most populous city on the planet, BUT, however you slice it, that’s just one city in the interior of China. (I’ve been – I promise I’ll show you pictures in a later email).

Anyway, I ask you to consider that same sense of “scale” when considering my words regarding those artworks. For me, they were unquestionably the most stunning part. I took more pictures of the treasures behind the glass than I did of the structures. Gaudy? Meh, for some reason I find the Chinese aesthethic way more appealing than the opulence of Louis XIV and Versailles, or even some of the extravagance of the Newport mansions near where I grew up in RI. It’s the artistry in the details, though, from every brick on every. single. ballustrade, to the thousands (multiple human lifetimes worth of effort!) of handcrafted tiles that make up the giant ceiling of just one building, to the solid gold statues of the Buddha, or the exquisite carved white-jade fish that also could be opened and used to hide objects inside. I’ve attached a picture of a gold amillary, a device used to track the movement of celestial objects in the sky. The picture doesn’t do it justice. Nothing does. It’s completely gold. Not golden in color, or gold-plated… it’s real —-ing gold. Worked by human hands into what you see below…hundreds of years ago. 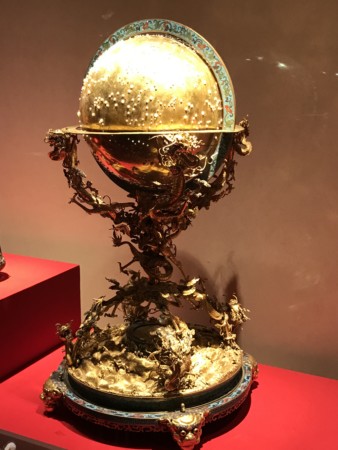 I didn’t get to hold it, but my guess is it’s worth a few bucks… or rather, yuan. 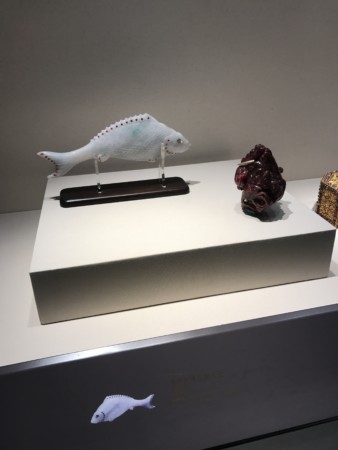 How much jade was discarded in making this? 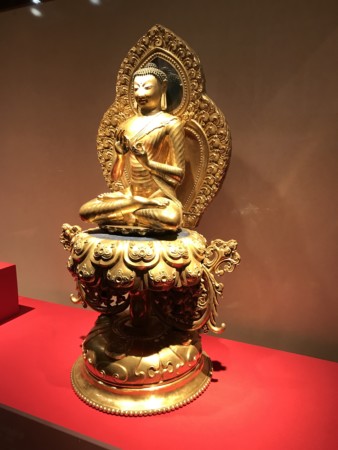 I’m sure the Buddha would be totally stoked… 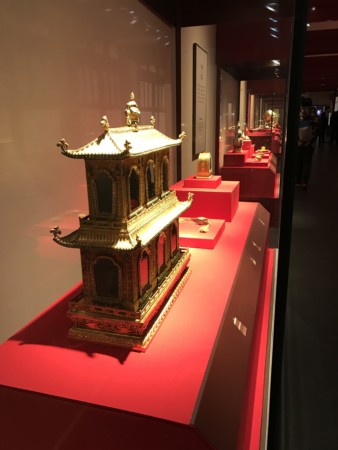 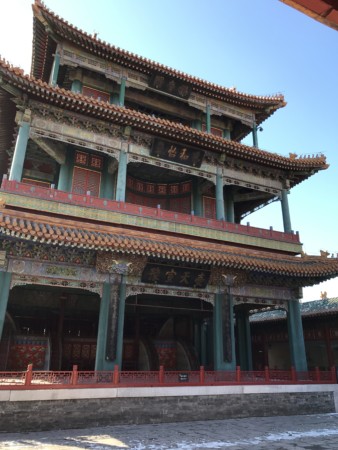 Oh yeah. The Forbidden City also had its own opera house inside. China’s equivalent to the Globe Theater.

After being overawed (again) at the Temple of Heaven, (pics no good), we spent time working and sampling some of the local fare… which brings me to what is the first, but likely not the last, of “Ozy’s Alimentary Analyses of China’s Food.” Many of you on this email list know me well enough to know that my palate isn’t quite as… sophisticated as some others. Yes, I’ve traveled the world and eaten in a great deal of places, from reaching into a communal pot of meat with Afghan tribesmen, to some of the finest steakhouses and sushi restaurants the U.S. and other countries have to offer… however, my mom and kids know that my tastes remain pretty simple – probably downright provincial, so please take this critique with the appropriate caveats.

They’ve got decent beer here, at least by my admittedly non-existent standards, so that’s something. But the food isn’t quite… well, it’s not ‘tall like the (small ‘c’) chinese food back home. It seems that here they just kill everything and then cook it right on the spot. For example, I had duck wings as an appetizer earlier this evening, and they were… let’s put it this way, it didn’t take a lot of imagination to see that they were formerly bird’s wings. As in… just a few minutes ago. (Did we walk by some birds in the alley before we came in?) They had, uh, *some* meat, plenty of bones, wings… and maybe some skin and feathers. I’m not sure, to be honest. I tried to politely show I had done something to them, but largely I resorted to the same tactics I did when I was a kid and Dad wanted me to eat my peas… I pushed them around the plate, nibbled a little, made a big show and lots of noise when I did nibble… then I tried to hide some under the mashed potatoes (but not too many, that’s how you get caught, yo!!), and otherwise made it look like I had eaten… some. At least enough not to be rude. Then I hightailed it out of there to a coffee shop near my apartment that I knew served a ham and cheese panini. (Never in human history has a crappy ham and cheese sandwich satiated the palate quite like that one).

Earlier this day I was having lunch with three Chinese friends. They wanted to take me someplace “special” – a very well-regarded restaurant founded by a famous Hong Kong actor. They ordered for me, telling me they would get “only the best” dishes. A kind of beef stew came, except with broth rather than the thicker stew we know. I thought, “Bingo! Yahtzee! This is something I can get down with!! Meat and something that looks similar to a potato…” Then I realized that the meat was rather… well-larded. Ahem.

I never really took the time to appreciate how hard it would be to remove the fat and gristle from a piece of stew meat with chopsticks. My companions finished their bowls and stared at me. I rubbed my stomach appreciatively… “Mmm-mmmmmm! Yum. Boy that’s good…” I said, mostly sincerely.

“Really?” they said, looking at the large gobs of fat with some meat hanging from them still stacked up in my bowl.

“Oh yes, Totally! Mmmm… watch!” I tried to drink more of the broth to make it look like the level was lower, hoping that would camouflage what I hadn’t eaten.

“Well, my stomach can’t handle too much after working out…” I said, patting my tummy like Winnie the Jinping. Which was a mostly true statement, but I was also thinking about the Haagen Dasz I had managed to find and was hoarding back in my apartment’s college dorm-sized refrigerator.

Despite all of the above, I think this China thing is going to work out for my diet. I really do need to drop a few pounds, so this circumstantially-enforced intermittent fasting is going to be perfect. With any luck, I won’t insult my friends too much while I’m at it. ? 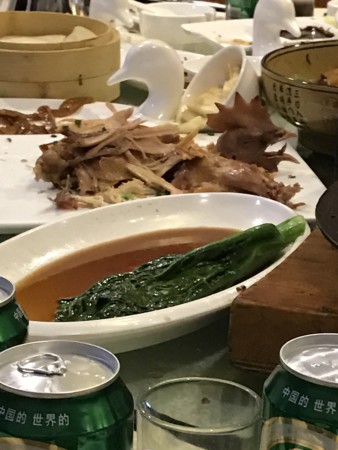 That’ll do it for this episode. I hope you all are well. I am enjoying myself and think of all of you at various times (but not all at once, because that would be weird.)

*Sorry, Glibs. If there’s an Instagram account by the name of the poem, it isn’t mine. While I know I’ve doxxed myself before, I used my true name on my Insta account in the original email. 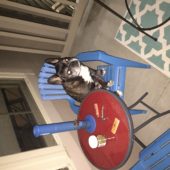