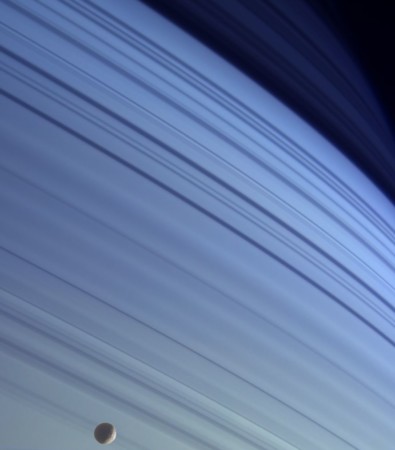 One more overnight.  Mess Steward Koal and Ensign Hope Morro had been, well, close, I guess you’d say.  Against regs, with the Ensign third-in-command and all, but these things happen in remote posts like this, and last night, Ensign Morrow hanged herself in her cabin.

Nine of us left now.  Nine human beings in the entire universe.  As far as we know, anyway.

This morning there was an odd magnetic anomaly that penetrated the post’s shields.  Not from Saturn, it wasn’t any of the usual radiation spikes or magnetic fluctuations from the gas giant.  This one came roughly from the direction of Titan, but without our chief astronomer it’s hard to determine the exact vector.  The anomaly only lasted a few seconds, and there weren’t any dangerous radiation spikes in the post facility itself, so in the end it apparently wasn’t that much of a much.  Curious, but under the circumstances, nobody really cares.

Commander Venko is trying like hell to keep everybody focused and functioning, but it’s starting to wear on even him.  Funny to see that old adamantine bastard showing signs of stress, but these are hardly normal times.

When the remaining staff filed in for the 0800 morning brief, Chief Deveran noted a new roster on the main screen at the front of the briefing room:

Wow, Deveran mused.  All the officers gone but the Old Man, I guess that does make me the next highest in rank.  I’ve got six months’ time in grade on Chief Abend and two years on Chief Featre.  Not as though I’ll get a raise in pay or anything.  Unbelievably, he chuckled, making Qul Abend, seated next to him, stare in disbelief.

Lieutenant Commander Venko entered then and strode confidently to the front of the room.

“All right,” he said.  “Listen up.  You’re probably all aware of the odd little magnetic anomaly we picked up last night, but Chief Deveran and Chief Featre assure me that it’s nothing to worry about and no damage was done to the station, so let’s not worry about that.  Saturn is still out there doing its thing, and this is probably just some kind of storm or another even we haven’t picked up yet.”

He consulted his pad, apparently referring to some notes he had made.

“We’re in a bad spot,” he said, somewhat unnecessarily.  “I’m sure you’re all feeling the loss of Lieutenant Foxx, Mess Steward Koal and Ensign Morro.  But it looks like all we have to rely on now is each other, so for the time being, let’s at least hang on to that.  Speaking of, Steward’s Mate Vorta, can you give us a rundown on the food situation?”

Rober Vorta stood up, his normally dark face ashen.  His voice shook slightly as he spoke.  “Well, sir, we’re actually a little better than you might think.  Our stored stocks will last us about a month, maybe six weeks with iron rationing.  We were supposed to get a supply ship in four or five days, but I’m guessing it’s not coming now.  But when I was going through inventorying everything, I found a starter Chlorella kit that will work in our little hydroponics setup, and there are enough organics that the post’s processor pulls out of the ice harvested for water and O2 that we can support the algal strain for a while.  We could live two, three years, as long as you don’t mind eating dried algae cake.”

“Quiet in the back there,” Commander Venko snapped.  “Thank you, Steward’s Mate Vorta.  Can you start the Chlorella immediately?”

“Already have done, sir,” Vorta replied.  “It will be a week or two before stocks are up enough to yield anything we can process for eating, but this Chlorella strain has really good yields in fats and proteins, so it will keep us alive, for a while.”

“Good work.”  Venko looked around the room.  “Anything else?”

The room was silent.

“Very well.  Let’s get back to our posts, one and all.  Dismissed.”

With a little over an hour before his trick in the command suite, Deveran went back to his cabin, laid down and put on his VR headset.  “Resume,” he commanded.

Back on the barrier island beach, the sun had grown low behind them.  It was time to go.

The children had been running back and forth with little plastic pails, filling them with seawater and dumping them into their sand tower’s ‘moat,’ which drained away into the sand as fast as they could fill it.  At their mother’s call, they stopped and obediently marched up the beach to where their parents were rolling up towels and putting things back in the lunch basket.

“Look, Da,” Jin said.  She opened her pudgy little hand, revealing some broken bits of clamshells.  “I found these.”

“You can bring them along with us,” Deveran told her.  “Have you got all your toys?”

“All right.  Come along.”  The family walked up the beach, over a small windblown dune, to the trail that led them to the tiny cottage they rented every summer.

Fragmentary reports had filtered in the week before, from Earth, from Luna, from Mars and the other outposts.  The nanotech devices the T’Cha used were truly horrible, reducing any living material to an amorphous gray sludge that was suctioned up by gathering ‘bots that descended from the great globes of the conquest ships.

Everybody on the station had family on either Earth, Luna, or Mars.  Nobody wanted to talk, or even think, about what had happened to their loved ones.  That way lay madness – or the airlock.

Deveran splashed a little water on his face, straightened his coverall, and headed off to start his shift.